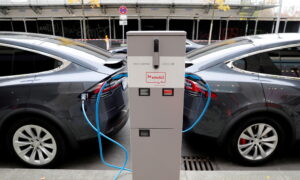 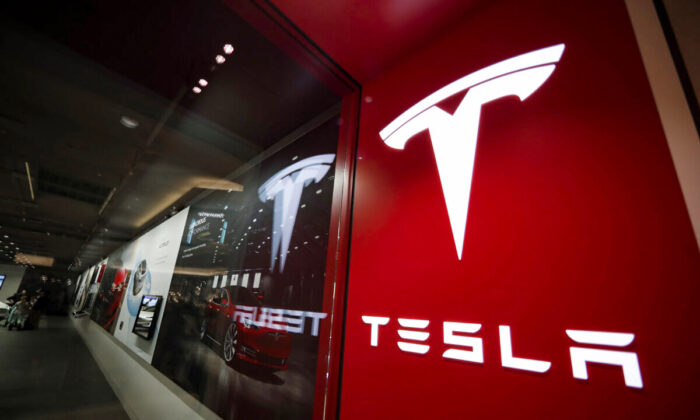 A sign bearing the company logo outside a Tesla store in Cherry Creek Mall in Denver, on Feb. 9, 2019. (David Zalubowski/AP Photo)
Companies

Tesla chief executive Elon Musk said Thursday the company will be moving its headquarters from Palo Alto, California, to Austin, Texas, a decision coming in context of the tech billionaire’s turbulent relationship with California.

Musk made it clear, however, that the move doesn’t mean Tesla’s winding down operations in California.

“To be clear we will be continuing to expand our activities in California,” Musk said. “Our intention is to increase output from Fremont and Giga Nevada by 50 percent. If you go to our Fremont factory it’s jammed.”

The Tesla chief added that high housing costs in California were squeezing Tesla’s ability to scale up in the Bay Area. Musk added that he expects it will be some time before the Austin factory is operating at full capacity even after it’s complete.

The move comes after Musk confirmed late last year that he had relocated from California to Texas and now calls the Lone Star state his home. That came after his feud earlier in 2020 with local authorities over pandemic-related shutdown orders.

After Tesla’s Fremont plant was shuttered in March 2020 following a COVID-19 related shelter-in-place order, Musk sued Alameda County, seeking an injunction against the order and threatening to move his company’s headquarters out of state.

“Frankly, this is the final straw. Tesla will now move its HQ and future programs to Texas/Nevada immediately. If we even retain Fremont manufacturing activity at all, it will be dependent on how Tesla is treated in the future. Tesla is the last carmaker left in CA,” Musk wrote in a tweet at the time.

Tesla later dropped the suit against Alameda County, according to documents filed in a California court on May 20 (pdf), a day after California Gov. Gavin Newsom told CNBC that the state was committed to the electric car maker’s success and that he was “not worried about Elon leaving any time soon.”

“I’ve had a lot of conversations with him, and we’re committed to the success and the innovation and the low-carbon, green growth economy that he’s been promoting for decades and the state of California is accelerating in,” Newsom said at the time.

In July, Musk announced that Tesla would build its next U.S. factory near Austin, with an expected 5,000 hires and an investment of around $1 billion.

Musk told The Wall Street Journal when announcing his decision to relocate to Texas that he believes California has become complacent as a locus of innovative companies, saying, “California’s been winning for a long time and I think they’re taking it for granted, a little bit.”