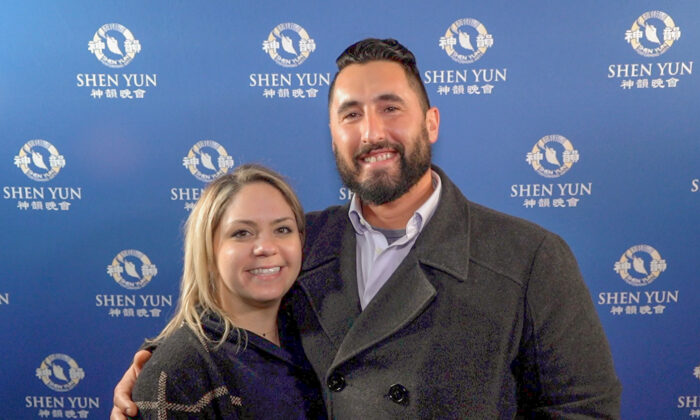 PHILADELPHIA, Pa.—Musician Johnny Trujillo was glowing in his praise for Shen Yun Performing Arts, and in particular the company’s unique orchestra.

“I just want to watch the music,” he said.

The Shen Yun orchestra is renowned for its harmonious blending of music played by classical Western and Eastern instruments.

Mr. Trujillo is a music teacher at East Norton Middle School in Norristown, Philadelphia, where he teaches band and orchestra. He is also a percussionist.

New York-based Shen Yun was playing at the Merriam Theater, Philadelphia. For Mr. Trujillo, who was accompanied by his fiancée, it was his first opportunity to experience the traditional Chinese classical and folk dance and music company.

“I love it. I think it’s really beautiful. Obviously, the colors and the dancing [are] amazing. The uniformity is really impressive. So I think that’s awesome,” he said.

It was Shen Yun’s orchestra that captivated Trujillo. The orchestra includes the hauntingly beautiful erhu and pipa as well as Western strings, percussion, woodwind, and brass instruments.

Mr. Trujillo fell in love with the trombone player. He explained his emotions.

“I’m listening to music, the way it’s scored, the trombone player. Anything that’s important that’s happening is given to the trombone. And he doesn’t have a section. He’s by himself. It’s almost a solo part at all times.

“It’s required that he nails all that stuff. And he did. I just want to love on the trombone part. To be honest …  for an American …  brass is really fundamental to our stuff—I thought he did a great job,” Mr. Trujillo said.

He explained his understanding of the dedication and training involved in attaining a high level of expertise as a musician.

“It doesn’t stop. You have to continue to practice. It’s never going to be good enough. You just keep doing it. It’s like golf. No matter how good you get—that’s what’s fun about music. You just keep playing,” he said.

While Shen Yun presents traditional story-based dances as well as ethnic and folk dances, Mr. Trujillo said it was the Shen Yun orchestra that accompanied the dances that stood out for him.

“I just want to watch the music. I just do that. I’ll see all the beautiful things that are happening on stage [but] I just get attracted to the music. … They’re so good,” Mr. Trujillo said.

Besides the orchestra and dance, Shen Yun presents vocalists and a solo performance by the erhu, the traditional two-stringed Chinese violin.

“It’s really enjoyable music. It’s satisfying music … It’s enjoyable for anyone. It’s accessible to anyone. You don’t have to know about music to like [the music],” Mr. Trujillo said.

Mr. Trujillo would recommend Shen Yun to everyone.

“Everyone should see live music,” he said. “I feel that great energy from it.”