Music Professor Calls it an Honor to See Shen Yun 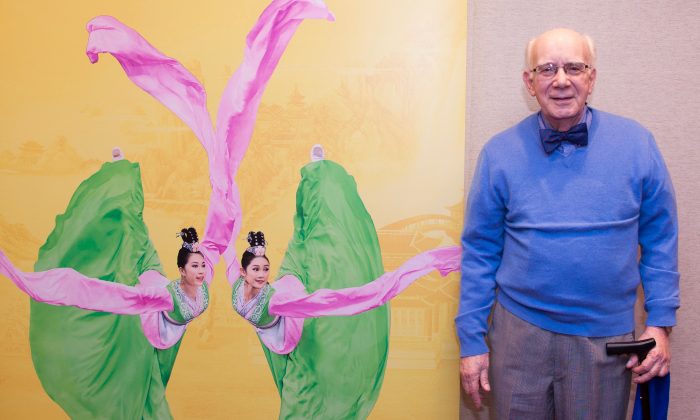 NEW YORK—Great art is something that reveals more with each viewing, according to professor Jerrold Ross. In Shen Yun Performing Arts, Dr. Ross saw a world of depth layered in the moods, emotions, and stories told through music and classical Chinese dance.

Dr. Ross is a scholar of the arts, and this was not his first time seeing Shen Yun performers either. On Jan. 15, he attended a performance of the New York-based company’s 10th season at the David H. Koch Theater at Lincoln Center, and shared his marvel at what goes on backstage in order to create such art.

A musician by trade, Dr. Ross holds doctorate in Music Education from New York University and began his career as a music teacher in New York state public schools. He moved on to teach in music in universities like NYU before eventually becoming Dean of the School of Education at St. John’s. He is also the chair of the state’s Arts Education Advisory Panel for public schools in the city.

In Shen Yun, Dr. Ross saw the values of 5,000 years come through the dancers’ movements.

“It’s not the acrobatics, that are fabulous in and of themselves, it’s the stories they tell. The movement that the choreographers have put together centuries ago express mood, feeling, emotions, story, all wrapped up in one,” he said.

Such depth of expression is precisely one of Shen Yun’s hallmarks.

Classical Chinese dance is the foundation of Shen Yun performances. It is an independent system of dance that has been refined and formed over thousands of years.

As Shen Yun explains, the dance system can be thought of as having three components. Dancers require training in dance fundamentals, including specific movements and postures. Then they must learn difficult tumbling and aerial techniques. The leaps, flips, and jumps audiences often associate with acrobatics and gymnastics actually spawned from classical Chinese dance.

And most importantly, classical Chinese dance has a special emphasis on bearing.

The arts live for the expression of values, including spiritual values.
— Professor Jerrold Ross

“The arts live for the expression of values, including spiritual values. So these dances are prepared to illustrate not only the artistic and story values of a civilization that preceded us, but they’re cultural and moral and spiritual values as well, and they all come through in the movement,” Dr. Ross said.

His elegant summary mirrors many of the Shen Yun choreographers’ explanations given in past interviews. Bearing emphasizes the performers’ inner spirit, intent, and even breathing, and it is expressed through the form. It is unique to each person and character, and the performers use it to express China’s authentic traditional culture.

Experiencing classical Chinese dance is one of the first aspects of Shen Yun’s multi-faceted performances that captures the audience’s attention. But once one lowers their gaze, perhaps upon a second or third viewing like Dr. Ross, one can notice the unique orchestra playing below the stage.

“The visual aspect of this performance is so stunning that people don’t really pay attention to the music, but what’s going on underneath, it is the same as what’s going on on the stage,” said Dr. Ross.

“The combination of the traditional Chinese instruments and the Western instruments is really something that you, as you become aware of it, realize it is a high form of art,” he said. Instruments like the pipa, the Chinese lute known as the king of instruments, harmonize completely with a Western orchestra. The orchestra plays original compositions with a distinctly Chinese sound.

Dr. Ross added that he has been fortunate enough to see these dancers before, “but you learn when you see great art more than once, there’s always something new that you see that you didn’t see before.”

His takeaway Friday night was the tremendous collaboration of Shen Yun both onstage and backstage. The original Shen Yun artists came together in 2006 to revive a culture from the brink of extinction, as traditional Chinese values were nearly destroyed under communist rule. It is a tragedy, but Shen Yun’s touring the world to share this art is a wonderful cultural exchange, he said.

“When something looks—as clever as this, all the way through, you know that backstage there’s been a whole lot of work,” Dr. Ross said. “I just think it’s an honor to be in this audience.”