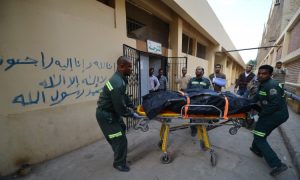 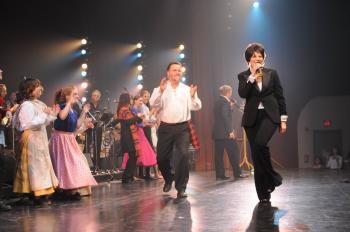 Deborah Davis (creator and producer) and Peter Beaudoin (musical director) in the finale of the 2009 edition of A Musical Taste of Our Canadian Heritage at the Canadian Museum of Civilization. (Courtesy of Alan Dean Photography)
Arts & Culture

By Cindy Chan
Print
OTTAWA—The history of Canada is the focus of the rousing extravaganza, “A Musical Taste of Our Canadian Heritage,” which will celebrate its 10th anniversary with five whirlwind shows at the Canadian Museum of Civilization from May 31 to June 3.

Deborah Davis, the lead vocalist, producer, and director, first envisioned the show in 1998 to teach children about Canada’s history through the country’s incredible musical heritage.

Back then Ms. Davis already had a successful music career behind her—a career that began more than 20 years ago when she sang for children with her band, Choonga Changa.

That grew into making musical productions to portray the history of particular styles of music.

The first, a show called “What Is This Thing Called Jazz?” focused on the evolution of jazz over the last hundred years. Ms. Davis produced a 10-page teacher’s manual and built up the show into an acclaimed feature performance that played at the Ottawa International Jazz Festival in 1994, 1995, and 1997.

“It was from that research that I began to see how important history was in the development of a nation, of people, culture, a sociology—because jazz, of course, played an incredibly important role in black history, in telling the story of black history,” said Ms. Davis.

When the opportunity came to apply for a federal grant in 1998 through Canada’s Millennium Foundation, she received $9,900 of funding to bring her vision to life.

Ms. Davis’s dream was to combine her love of music and history to tell the story of Canada from its inception to today. She wanted to produce a show that was entertaining as well as educational and inspiring—one that would instil in children pride in their Canadian heritage with its multicultural beginnings.

Her inaugural production, put on by 15 dedicated members in a high school auditorium, turned out to be a gratifying success with five sold-out shows.

Today, with corporate and community sponsorships and other supporters, especially title sponsor TD Music, the production showcases more than 80 pieces of music, about 65 cast and crew, and hundreds of pieces of costumes, along with a 71-page teacher’s manual in both French and English.

The 90-minute program features the history of the Inuit and First Nations; the early settlers and their traditional Quebecois, Celtic, and Acadian songs; classical music and opera; origins of the Royal Canadian Mounted Police; jazz, country, and folk music; Canadian pop and rock; and Canada’s contribution to film, television, and the world stage.

The upbeat, fast-paced production examines representative pieces of music from each historical era or musical genre, takes a verse or chorus from each piece, and ties them together to form a series of short medleys.

“It allows [students] to experience a great deal of Canadian history in a way that is going to be very memorable for them,” said Ms. Davis.

She notes that the universal language of music is the best way to tell history, adding that the show resonates not only with those from Canada who speak English or French but also immigrants and visitors from other countries.

“It doesn’t matter where they’re coming from, they are enchanted with the story of Canada and they don’t have to know a lot about the history.”

The production is presented by Odyssey Showcase, a charitable organization formed to advance the learning of music and history in Canada. Schools pay a nominal fee of $6 to $10 per student and TD Music finances the rest. Students from grade one to university attend the show every year.

This year Odyssey is receiving calls from American universities that are bringing students next year to Canada to learn about their northern neighbour. Ms. Davis is also working with different Toronto school boards to meet the strong demand for the show to play in Toronto next year.

She hopes to have sustained sponsorship in order to do the show for those students. As for doing a tour of Canada sometime in the future? “We’d love to,” she said.

The production is always introducing new components, such as a segment this year that celebrates the last 10 years of music-making by emerging young Canadian artists.

“This is their history. . . . Those new Canadian artists and their songs are telling the story of what’s happened in the last 10 years,” she said.

For information on tickets and show times, please visit www.odysseyshowcase.org or call 613-321-2066. The first four shows are sold out, while some tickets are still available for the 7:30 p.m. show on June 3.