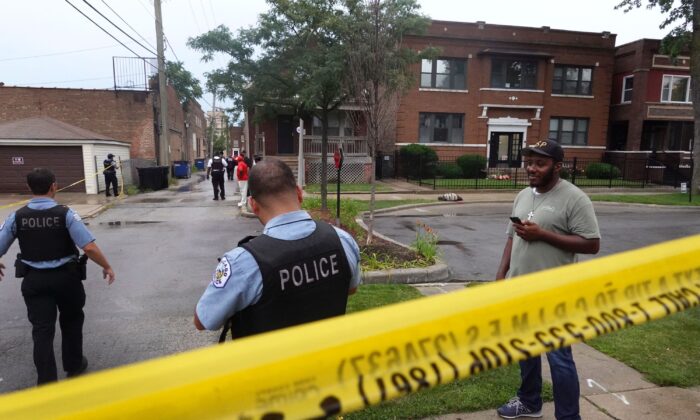 Police secure the scene of a shooting in Chicago, Ill., on July 21, 2020. (Scott Olson/Getty Images)
Crime and Incidents

Murders Skyrocketed to Highest Level in More Than 25 Years: CDC

The homicide rate via firearms skyrocketed in 2020 to the highest level in more than 25 years, a new analysis released May 10 shows.

The rate shot up 35 percent to about 6.1 per 100,000 people, according to an analysis from the Centers for Disease Control and Prevention (CDC).

“This is a historic increase,” Dr. Debra Houry, the CDC’s acting principal deputy director and the head of the agency’s National Center for Injury Prevention, told reporters on a call.

Researchers with the agency analyzed data from the CDC and the U.S. Census Bureau and found that murders increased across all age groups, with the most significant jumps recorded among those aged 10 to 44.

Black males aged 10 to 44, who already had the highest rate, had the largest increase.

“To put this in perspective, the rate among young black men and boys ages 10 to 24 is more than 21 times as high as the rate for white males in same age group in 2020,” Thomas Simon, one of the researchers who analyzed the data, told reporters.

Suicides by firearm, meanwhile, barely increased over one year and didn’t climb above the level recorded in 2018.

The analysis, published in the CDC’s quasi-journal, did not examine why the number of murders rose so high or why suicides did not.

One piece of the study looked at county-level murder numbers and concluded both homicides and suicides were higher in counties with the most poverty.

Researchers said that “reasons for increasing rates and widening inequities are unclear and potentially complex,” speculating that they include disruptions to key services during the COVID-19 pandemic and the movement to cut funding to police departments.

Christopher Herrmann, assistant professor at the City University of New York’s John Jay College of Criminal Justice, told The Epoch Times in a previous interview that murders are linked to many conditions brought about during the pandemic, including spikes in stress levels, higher unemployment, and emotional distress.

“Schools are closed, people are out of work, [there’s reduced] law enforcement, due to either illness within the rank and file of agencies, the weakened staffing, to officers no longer engaging proactively in community policing, no after-school programs, no sports—I think the combination of all of that just caused an incredible spike,” added Lisa Dadio, director of The Center for Advanced Policing at the University of New Haven.

The CDC previously found that life expectancy for Americans dropped nearly 2 years to 77 years in 2020. Most of the deaths were attributed to COVID-19, though some of those deaths had a different primary cause.

The FBI, meanwhile, previously pegged the number of homicides in 2020 as rising nearly 30 percent from 2019.