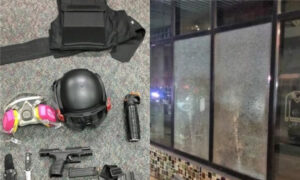 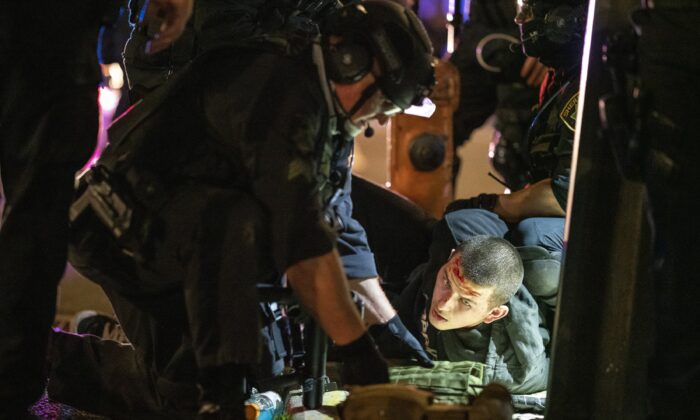 Portland police officers and Oregon state troopers arrest a man they said was armed with a rifle during a protest in Portland, Ore., on Nov. 4, 2020. (Nathan Howard/Getty Images)
US News

Shootings and murders significantly increased in Portland, Oregon, starting in May 2020 and have been plaguing the city since.

The death of George Floyd in police custody that month in Minneapolis triggered nationwide protests and riots, with Portland seeing escalating violence that eventually culminated in nightly clashes between federal officers and insurgents.

Shootings rose 173 percent after the riots, while murders spiked 255 percent in the months following the unrest, according to Portland police data analyzed by the Maryland Public Policy Institute.

Sean Kennedy, a visiting fellow at the institute, told The Epoch Times that he sees a clear connection between the spike in violence and the demoralization, disempowerment, and defunding of police following Floyd’s death.

“When the police stand down, criminals step up is the simplest way to put it,” Kennedy said.

Rioters in Portland attacked the U.S. courthouse shortly after Floyd’s death, prompting the federal government to send reinforcements to protect the building. For weeks afterward, clashes between federal officers and rioters played out and made news around the world. Hundreds of insurgents were arrested while several officers were sued for alleged excessive use of force.

Federal and city officials eventually reached a deal to scale back federal involvement and send state troopers to help local law enforcement. Rioters and protesters turned their sights on other buildings, including police stations and businesses. This continues to this day.

Police officials have said that 911 calls are going unanswered, in some cases for hours, because so many officers are tasked with dealing with the unrest—a major concern in trying to respond to the spate of shootings.

In an emailed statement, Portland Sgt. Kevin Allen told The Epoch Times that the causes of gun violence and homicides are varied and complex.

“There’s no one cause that we can point to. But it’s extremely concerning. For months we have had additional detectives assigned to the Homicide Division to help solve these cases. Additional detectives have also been working out of the Assault Detail. In fact, just recently some were branched off to focus on investigating shootings specifically,” he said.

Police officials, under the direction of Portland Mayor and Police Commissioner Ted Wheeler, a Democrat, announced last month the formation of the Enhanced Community Safety Team.

The team, much like the disbanded Gun Violence Reduction Team, is going to focus on gun violence.

“Our communities can’t wait,” Portland Deputy Chief Chris Davis said in a statement at the time. “The mayor has made it clear that this is a top priority and that we need to start right away. So I think this is a step in the right direction toward addressing this unacceptable gun violence we’re seeing in our city.”

Multnomah County District Attorney Mike Schmidt announced around the same time that his office had initiated 26 cases related to gun violence in the first 18 days of February, saying: “I am surging our resources in the district attorney’s office in response to the escalating gun violence occurring in our community. This is the most pressing public safety issue we face right now.”

Wheeler’s office told The Epoch Times: “Gun violence is not endemic to Portland. Community violence, and gun violence in particular, is rising sharply around the country. It is a public health crisis as contagious and viral as any pandemic. In the middle of a global pandemic, on the front edge of a deep recession with record unemployment, kids out of school, parents out of work, rent unpaid, and nowhere to go, the pressures we’re facing collectively and individually would have been unimaginable a year ago. These pressures, and the lack of an effective federal safety net to relieve them, are driving this spike.”

The office said it is working urgently to address the crisis “with a program that will be effective and responsive to increasing gun violence, while avoiding the over-policing of the Black community that we have seen historically.”

Wheeler said earlier this month, after Portland saw its 20th homicide of the year, that he will seek $2 million to bolster the response to shootings and murders. An interfaith group had written to city commissioners, including the mayor, requesting immediate action to address gun violence.

“Cuts to the Police Bureau created a vacuum that undermined public safety and the very communities whose voices the Council—and our community—seek to amplify,” they wrote.

Wheeler convened former and current elected officials on March 15 for a press conference to condemn the continued riots and said authorities are taking a more hardline stance against them, pointing to the kettling tactics police used against rioters who had begun smashing windows.

“Recent riotous activity and destruction of property by self-described anarchists do not support the calls for social justice and system reform,” Multnomah County Sheriff Mike Reese said during the briefing. “They only simply damage private property from businesses already suffering from the economic slowdown due to COVID-19, and they disrupt vital public safety and government services that our community relies on. Responding to these events pulls away resources from public safety priorities.”