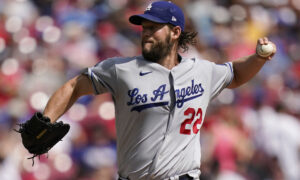 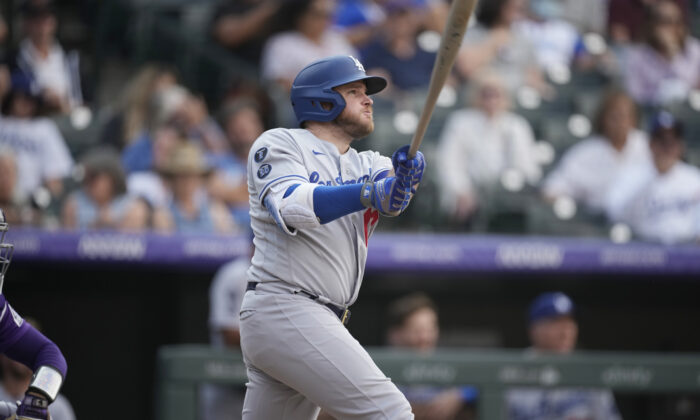 Muncy Homers in 10th, Dodgers Rally for 7-5 Win Over Rockies

DENVER—The ever-reliable Max Scherzer just couldn’t get his usual grip on the baseball in the thin air at Coors Field. He licked his hand. He held the ball tighter. But nothing seemed to work.

No worries, his teammates had his back on a rare off day for the three-time Cy Young winner.

Max Muncy homered to start the 10th inning and the Los Angeles Dodgers rallied past the Colorado Rockies 7-5 on Sept. 23 to tighten the NL West chase.

“We know we’re a great team. We know we can come back from any situation,” Muncy said. “But sometimes when you have a come-from-behind win like that, it reaffirms it and gets it fresh in people’s minds.”

Scherzer was in the clubhouse as he watched the drama unfold. He just knew that Trea Turner was going to come through with that two-out RBI single to tie it up in the ninth.

“Just kind of got sideways for me,” Scherzer said. “You learn from these outings. This is the toughest place to pitch and you learn from it. If you can learn something from here even when you fail and then when you take it and go somewhere else, these lessons can be applied to other outings.

“Sometimes when you get punched in the face, that’s what it takes to go out there and learn how to do something new.”

Scherzer had a feeling Muncy would come up clutch, too. Muncy delivered by drilling a slider from Lucas Gilbreath (2-2) to deep center, setting off a roar from the Dodgers faithful scattered throughout Coors Field. It also scored Justin Turner, who began the inning at second base.

It was a comeback win the Dodgers needed with time running out in their bid for a ninth straight NL West crown. Los Angeles moved within one game of the San Francisco Giants, who lost 7-6 at San Diego in 10 innings. Both teams have nine games remaining.

“This is a big one,” Dodgers manager Dave Roberts said. “Today, Max didn’t have his best stuff. … For us to pick him up for a change, it was nice.”

The Rockies were an out away from winning their first home series over the Dodgers since August 2018.

Gilbreath had a string of 17 straight scoreless outings snapped in the 10th by Muncy’s 35th homer of the season.

“This loss, it sucks. We had them,” Rockies starter Kyle Freeland said. “We played quality baseball all three games against them. Unfortunately, it didn’t turn our way.”

Kenley Jansen (4-4) earned the win by pitching the ninth and Blake Treinen picked up the his sixth save by getting C.J. Cron to hit into a game-ending double play.

Carlos Estévez got two quick outs in the ninth before a single by Mookie Betts and another by Corey Seager off Estévez’s right shin. Estévez remained in the game and after a few warmup tosses, surrendered the single to Turner.

“That ninth inning was next level,” Roberts said.

Scherzer wasn’t at his best, allowing five runs over five innings. But the right-hander was let off the hook for his first loss with the Dodgers by Turner, who was acquired along with Scherzer from Washington on July 30.

He still hasn’t lost since May 30.

Freeland settled down after a rough start, going six innings and giving up three runs. The lefty proved just as potent at the plate, coming through with a two-out, two-run single against Scherzer in the second that tied the game at 3 apiece.

Raimel Tapia’s two-run homer gave Colorado a 5-3 lead in the fifth. He launched a cutter from Scherzer into the seats in right field. It was Tapia’s sixth homer of the season.

AJ Pollock made it 5-4 in the eighth with an RBI double off Jhoulys Chacín.

Seager finished with four singles, which included a two-out, two-run blooper in the second to make it 3-0. Freeland screamed into his glove in frustration and kicked at the dirt.

Freeland wasn’t happy with home plate umpire Ed Hickox’s calls, either. But Freeland found his rhythm after that, giving up three singles until being replaced by reliever Daniel Bard.

“I was extremely frustrated with Ed behind the plate and the kind of day he was having,” Freeland said. “I was glad I could channel that because I was probably a couple of choice words from being sent out of that game.”

Up next, the Dodgers open a three-game series at Arizona on Friday, with righty Tony Gonsolin (3-1, 2.93 ERA) taking the mound.