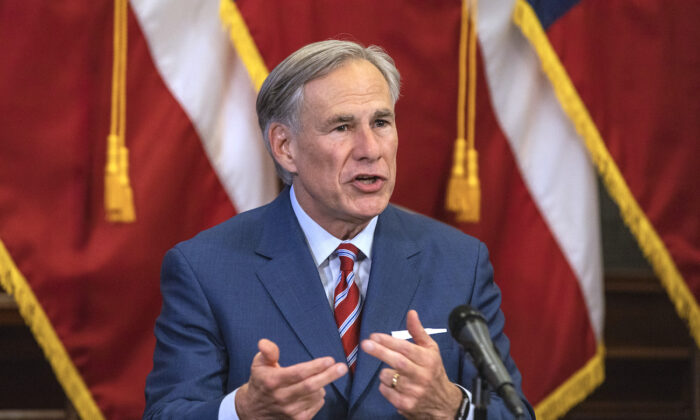 Governors across the United States have either ended their states’ COVID-19 mask mandate or are considering ending it soon—and have ordered rollbacks on capacity limits and restrictions on businesses.

In one example, Utah’s statewide mask order is scheduled to end April 10 under a law that was approved on March 5, and Gov. Spencer Cox, a Republican, told Fox News on March 6 that he won’t veto it.

“We anticipate that by April 1, every adult in the state of Utah will be eligible for the vaccine,” Cox said. Utah, he said will “have about 1.5 million vaccines in the state by April 10, when that mandate goes away.”

Alabama Gov. Kay Ivey, a Republican, said March 4 that the state will end its mandate in about a month, saying that starting April 9, wearing face coverings will be “a matter of personal responsibility and not a government mandate.”

On March 2, Mississippi and Texas both announced the end of their requirements for masks and will allow businesses to operate at full capacity. The move drew condemnation from President Joe Biden and other White House officials.

“Starting tomorrow, we are lifting all of our county mask mandates and businesses will be able to operate at full capacity without any state-imposed rules,” Mississippi Gov. Tate Reeves, a Republican, said in a Facebook post last week. “Our hospitalizations and case numbers have plummeted, and the vaccine is being rapidly distributed. It is time!”

“Too many Texans have been sidelined from employment opportunities,” Abbott said. “Too many small business owners have struggled to pay their bills. This must end.”

Connecticut Gov. Ned Lamont, a Democrat, also announced that some CCP virus rules will be rescinded, including capacity limits that were placed on businesses and sporting events. Amusement parks, he said, can also open. But Lamont said the state’s mask mandate will remain in place.

In February, Iowa Gov. Kim Reynolds, a Republican, lifted the mask requirement, saying, “We know what we need to do, and it doesn’t require a government mandate to do it,” while Montana Gov. Greg Gianforte, also a Republican, allowed the state’s mask rule to expire last month.

Arizona Republican Gov. Doug Ducey announced recently that he will implement the “next phase of business and safety protocols,” which includes removing the limits for capacity on businesses and the return of major sporting events. Ducey said that face coverings and social distancing would be required, however.

West Virginia Gov. Jim Justice, a Republican, said he would lift capacity restrictions on restaurants, bars, and other businesses. Masks would still have to be worn.

“I’m going to continue to listen to the medical experts,” Justice said about masks. “We absolutely expect you to continue to wear your mask. You know, I’m not a fan of the masks either. But, at the same time, we know they’ve saved a lot of lives, and we know we’re too early in the game to let our guard down.”