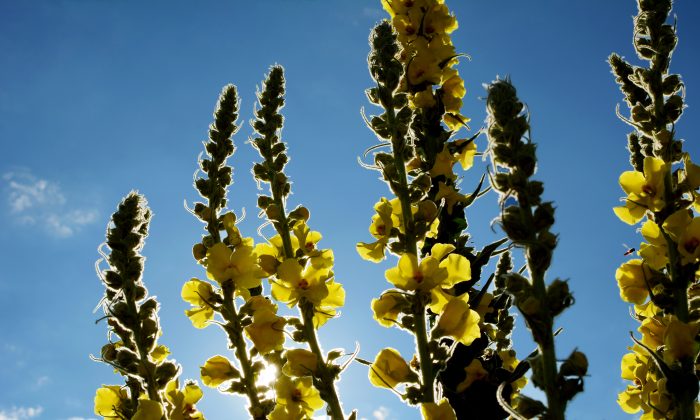 Mullein, the Magical Plant That Sets Bones and Alleviates Coughs

Mullein is a common roadside weed that really stands out in a crowd. The large leaves feel like thick wool flannel. In its second year, the plant sprouts a stalk that can grow six- to eight-feet high.

Mullein has remained a favorite herb in European folk medicine for centuries, and was quickly adopted by Native Americans when it came to the New World.

Today, it is primarily used as a cough remedy, but it has other medicinal uses that are often overlooked—some were only recently discovered.

Mullein tea can be used for all types of coughs, but it is particularly suited for deep, dry coughs that cause pain in the chest.

But, mullein is much more than a cough remedy, according to Matthew Wood, a registered herbalist and author of several books on herbal medicine. In “The Book of Herbal Wisdom,” Wood recalls when he recommended mullein to a friend after she fell against a two-by-four and cracked a rib.

The rib began irritating surrounding tissue, and she developed a nagging cough. Wood figured if mullein is used for coughs so strong they break a rib, maybe it can also be used to fix ribs that cause a cough.

With nothing to lose, Wood’s friend taped a mullein leaf over her rib and by the morning it was back in place. A few days later, the pain and cough returned, but applying one more leaf fixed it for good.

Since then, herbalists around the world have been using mullein to set bones with great success. Wood mentions a chiropractor who was so intrigued by the idea, he wished he would break a rib so he could try it for himself.

“A few years later, his wish came true. He put a mullein leaf on, and the bone went back in place,” Wood said.

Then the chiropractor wanted to prove the treatment scientifically with a patient of his who was in a car accident. This patient’s injury was even more complicated than his own because her ribs were jabbed into each other and would be harder to set. He gave her an x-ray, taped on a mullein leaf, and sent her home.

“He had her come back the next day and get another x-ray for free and, presto, the bone was back in place,” Wood said. “He had his proof. He got to prove magic was real.”

In addition to his mullein discovery, Wood is known in the herbal community for finding new indications for several other herbs.

The idea behind the Doctrine of Signatures is that a plant resembles the part of the body it can be used to treat. Those who learn to use it well can apply it to plants they’ve never seen before and still gain some understanding of its medicinal potential.

“The Doctrine of Signatures was really the leading light for me when I started,” Wood said. “I didn’t really have any other ways of understanding plants really well, except maybe tradition and specific symptoms. If it was specific then I might be able to use it, but I really wouldn’t understand how or why.”

With enough practice devoted to observing plants and people, the Doctrine of Signatures can be a profound method of pattern recognition connecting nature and disease. In the case of mullein’s cough-curing ability, Wood says the large, fuzzy leaves suggest an affinity to the lungs.

“Large leaves are often lung remedies,” he said. “This signature shows lots of surface area for transpiration—where water evaporates out of the leaf and into the atmosphere. This relates to our respiration. There’s definitely a relationship there. “

Another way the mullein leaf resembles our lungs are the fine hairs on its surface. Wood compares mullein’s woolly fuzz with the cilia in our respiratory system. Cilia are microscopic fibers which serve to catch particulates in the lungs so we can cough them out. Mullein can serve a similar function.

“Mullein can be used for bronchial irritation from pollution where particles in the air are bothering the lungs, especially if our cilia are worn down.”

On its surface, mullein seems like a very dry plant, but inside is a slimy substance called mucilage. Wood says this salty plant slime helps draw water into dried out tissues. This not only moistens dry lungs, it also benefits stiff joints.

“A lot of things are solved if they get well lubricated, especially musculoskeletal problems,” Wood said. “Mullein lubricates broken bones and helps them slip into the right place and set right. It loosens, softens and lubricates. Sometime bones set immediately after taking the remedy. It is for bone setting, but we don’t know if it helps bone growth.”

Mullein’s mucilaginous nature is also helpful in flushing out the lymphatic system, and is traditionally used to treat chronic, swollen lymph glands.

Other herbalists have since built upon Wood’s idea of mullein as a bone-setting medicine. One of the first to jump on the idea is Michigan herbalist Jim McDonald, who discovered that the herb was especially helpful in straightening the back.

“Jim introduced the mullein root for setting bones of the spine. He noticed that it grows up so straight the second year, so it must have a lot of straight energy” Wood said. “This makes a lot of sense. Mullein looks like a spine.”

McDonald also discovered that mullein root tea is a great remedy for nerve pain, and has successfully used it to treat facial neuralgia.

“Fluid keeps the nerves relaxed and moist and able to have the electrical charge to jump the synapse from one cell to another,” Wood said.

The botanical name for mullein, Verbascum, comes from the Latin word for beard— a reference to the woolly leaf. Verbascum thapsus is the species usually used in medicine, but other mullein varieties have similar properties.

Mullein is a biannual plant, which means it develops over two years. The first year, it’s just a round cluster of leaves that stay close to the ground. The second year it sends up the stalk. At the end of the second season it goes to seed, and the cycle begins again.

The yellow flowers that bloom on the stalk have their own unique properties: calming, anti-inflammatory, and antibacterial. An old folk remedy is mullein flower oil. Fill a small jar with flowers, cover with olive oil, and steep in a sunny window for about a month. Mullein oil is traditionally used for earaches and to remove wax.

For topical use (bone setting, swollen joints, or arthritis), go for the fresh leaf, but for other applications a tea or tincture from the dry leaf is fine. Mullein tea is mild tasting and a little salty.

If you can’t find a mullein plant growing nearby, the dry leaf is available for purchase online. But you don’t need much. One pound is a huge volume of mullein because the leaf is so light and fluffy.

Mullein is a very safe, well tolerated, and non-toxic herb.

“I don’t think that people really need to worry about taking too much of it,” Wood said. “It has no toxins. Maybe if you were a really moist person, a lot may be bad for you.”