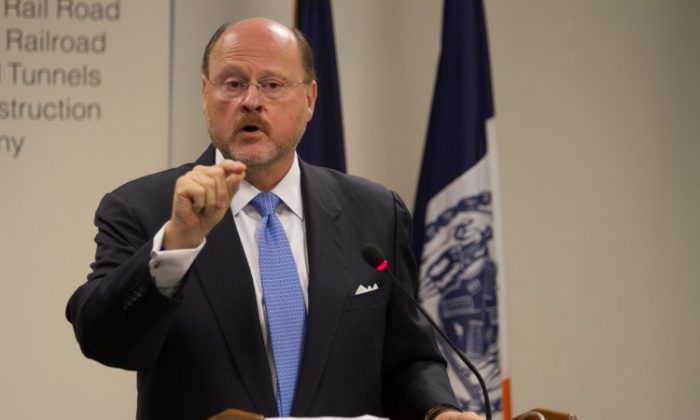 MTA’s Lhota Can’t Run for Mayor Unless He Resigns

NEW YORK—Joe Lhota, chairman and CEO of the Metropolitan Transportation Authority, said he’ll likely make a decision on running for mayor by the end of the month.

But Lhota cannot publicly announce he is running unless he resigns from his current position, under a state law publicized by transportation blogger Benjamin Kabak.

Under the law, section 3-C of the Public Officers Law, no commissioner, executive director, or other heads of any state agencies can run for a public office unless they resign from public employment.

The only other option is requesting and being granted a leave of absence without pay.

No campaign activities, including announcing a candidacy, circulating petitions, and soliciting contributions, can take place before the presumptive candidate—in this case, Lhota—resigns or takes a leave of absence.

Lhota, who was confirmed as chairman in January, has been widely commended on the transportation authority’s response to Hurricane Sandy, getting the subway system back up running quickly while dealing with substantial storm damage.

Lhota would run as a Republican. Only one candidate officially running is Republican so far, media executive Tom Allon, who switched from the Democratic Party to the Republican Party in October. Meanwhile, the Democratic field in left-leaning New York City is relatively crowded.

Kabak notes that there have been six different heads of the authority since 2006, “and a Lhota departure would just add to the instability at the top.” The authority continues to finish repairing the system after Sandy, while officials are contemplating what can be done to improve storm protection.

Among other key activities, the authority’s board will vote on fare increases this month, while the next capital plan (2015–2019) is being developed. The next plan includes details on getting funding for large projects such as the Second Avenue subway and maintenance of the aging subway system.