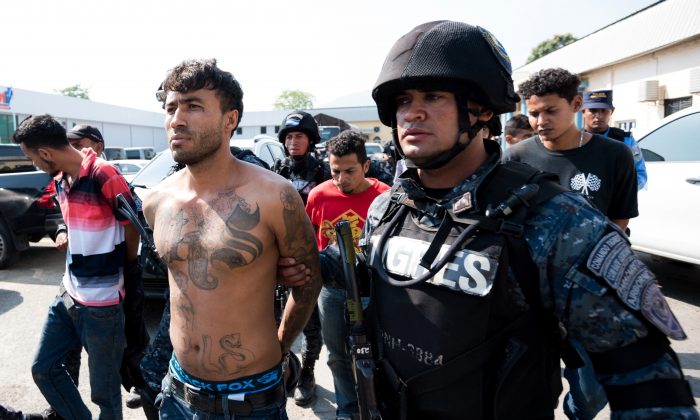 Honduran police commandos arrest members of the Mara Salvatrucha (MS-13) gang in San Pedro Sula, 180 km north of Tegucigalpa, on Feb. 17, 2017. The MS-13 gang is allegedly connected to the cases of extortion against the public transport that have left 12 people killed so far this year and 215 in 2016. (JORDAN PERDOMO/AFP/Getty Images)
US

CENTRAL ISLIP, N.Y.—Federal agents said Thursday that they have caught the members of a violent El Salvadoran street gang who killed three teenagers last year, including two girls who were inseparable best friends at their Long Island high school.

Nisa Mickens, 15, and Kayla Cuevas, 16, were slaughtered in a residential neighborhood near an elementary school in a Sept. 13 attack that came amid a national conversation about illegal immigration. Last December, Donald Trump referenced the killings in Brentwood during a profile for his Time magazine “Man of the Year” award after being elected president.

Within a few weeks of the girls’ deaths, the remains of three other Brentwood teens were found hidden in secluded areas. The victims included Jose Pena-Hernandez, 18, who had vanished in June.

Thirteen members of the MS-13 gang are facing federal charges in connection with the investigation, though not all are being charged in the killings, local and federal officials announced Thursday.

The identities of the suspects, including their immigration status, were not immediately released. U.S. Attorney Robert L. Capers and local police officials have scheduled a midday press conference to discuss charges.

A law enforcement official told The Associated Press that the suspects include people who will be charged with the deaths of Mickens, Cuevas and Pena-Hernandez. That official was not authorized to release information and spoke on condition of anonymity.

Gang violence has been a problem in Brentwood and some surrounding Long Island towns for more than a decade, but Suffolk County police and the FBI began pouring resources into a crackdown after the killings of the high school girls sparked outrage.

Some people complained that police, school officials and others were not doing enough to stem the violence. Since then, police have arrested more than 125 suspected MS-13 gang members in Brentwood and elsewhere. MS-13 has been blamed for at least 30 other killings on Long Island since 2010.

One of Trump’s priorities is a crackdown on illegal immigrants in the country who have committed crimes. He promised as much in his December interview with Time magazine, when he referenced a Newsday story about the killings.

“They come from Central America. They’re tougher than any people you’ve ever met,” he said. “They’re killing and raping everybody out there. They’re illegal. And they are finished.”