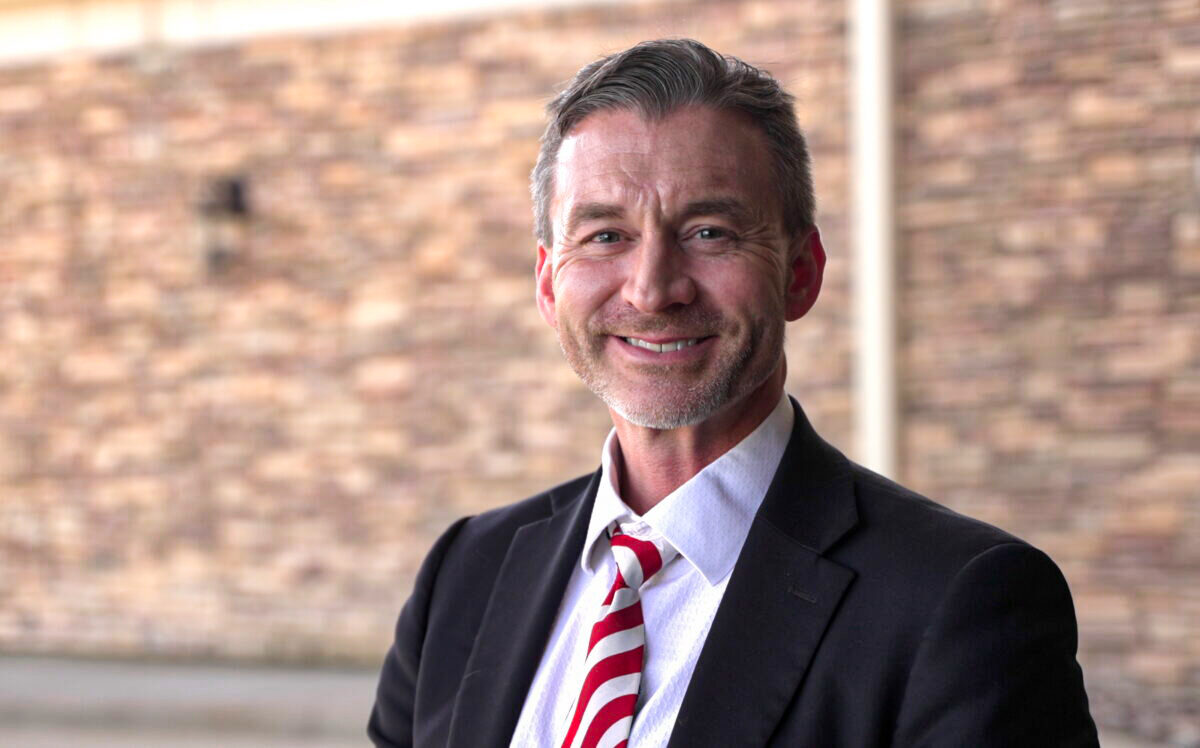 Dr. Ryan Cole in an interview with The Epoch Times during the Global COVID-19 Summit at Houston, Texas, on April 8, 2022. (York Du/The Epoch Times)
Health Viewpoints

According to Dr. Ryan Cole, messenger RNA (mRNA) vaccines produce persisting spike protein that may cause severe damage to the recipient’s health, such as unusual clotting, heart inflammation, or cancer.

Pfizer and Moderna COVID-19 vaccines are the only mRNA vaccines approved or authorized for booster use in the United States. Johnson & Johnson COVID-19 vaccines use a viral vector, a modified version of a virus, to give cells instructions.

Cole is a pathologist who has operated a lab for 18 years. He has seen, mostly through the microscope, about 500,000 patients in his career.

“[In] normal mRNA, you have cells making messages all day long … mRNA is generally broken down within minutes to maybe an hour or two. mRNA should not persist,” Cole told EpochTV’s “Facts Matter” program during the Global COVID Summit held in Houston, Texas, on April 8.

Cole said mRNA is a message that tells your cell to make a certain protein for different body reactions.

“But when you put this synthetic pseudouridine [in your body],” said Cole. “The body doesn’t know what to do with it, and it looks at it and says, ‘Hmm, I don’t know what to do. So I’m not going to break it down.’ And so it evades that breakdown process, and it also evades an immune response. But it also turns down our immune system, which is not a good thing because other things—cancers, viruses—get to wake up.”

In a February interview with The Epoch Times, Cole said that he had seen an uptick in cancers that he shouldn’t be seeing. In addition, he has seen elevations and clotting factors persisting for a long time post-vaccination. However, when he voiced his concerns, no government agencies were willing to look into this finding.

Cole’s view aligns with Dr. Robert Malone, a key contributor to mRNA vaccine technology. Malone, in an article published by The Epoch Times on April 11, said the “mRNA” from the Pfizer and Moderna vaccines is not really mRNA. “These molecules have genetic elements similar to those of natural mRNA, but they are clearly far more resistant to the enzymes which normally degrade natural mRNA, seem to be capable of producing high levels of protein for extended periods, and seem to evade normal immunologic mechanisms for eliminating cells which produce foreign proteins which are not normally observed in the body,” said Malone.

Dr. Joseph Mercola, an osteopathic physician, also said the spike protein from the COVID-19 vaccines is to blame for the severe organ damage.

“Science demonstrated that it wasn’t the virus causing endothelial damage that led to organ damage, such as was found in the heart, liver, and kidney of COVID-19 patients. Rather, it was the spike protein that was also being injected in a genetic therapy shot program,” wrote Mercola in a recent article.

Some studies showed the vaccine-induced spike protein persists in human bodies, said Cole, but “we have no idea how long that synthetic sequence is persisting.”

Cole said a German professor, Dr. Arne Burkhardt, found in his autopsy study that the spike protein could persist in the human body for as long as 128 days.

“And the spike [protein] that [mRNA vaccines] make induces pathologic changes in the body. It can cause clotting,” said Cole. “We hear these young people dying from clots, micro clots, not normal types of clots. These are a unique type of clot that persists, chokes off the body of oxygen, chokes up body parts, inflames the heart, causes heart attacks, causes strokes, causes cancers in young age groups … Unusual things that shouldn’t be happening and are likely related to a synthetic, genetically modified sequence that we’re putting into the bodies of billions of people.”

Cole said our cells have DNA-repair mechanisms, but the DNA can’t repair itself when the spike protein gets into the nucleus of the T-cells, one of the important white blood cells playing a central role in the immune system.

“A study out of Sweden shows this,” said Cole, referring to a recent study showing that mRNA from Pfizer’s COVID-19 vaccine can enter human liver cells and be converted into DNA inside the nucleus. “Now the cell, the DNA can’t repair itself. So the cell is going to do one of two things, it’s either going to blow itself up, that’s called apoptosis, or it’s going to mutate. And now it becomes an atypical malignant cell.”

“To that question as well, the immune suppression because of the spike [protein], because of the pseudouridine, it changes patterns of receptors on cells,” said Cole, adding these receptors could enable T cells to fight off all kinds of viruses.

“Now, you don’t have a defense system. This cancer cell can invade over the wall. This pathogen can invade over the wall because your immune system has been suppressed to a degree that allows that to happen. When does that stop? We don’t know. How do we reverse it? We don’t know. Is it happening to everybody? No, thank heavens. Is it happening to a degree that’s alarming? You bet.”

A peer-reviewed study published on Apr. 15 also found that mRNA vaccines “promote sustained synthesis of the SARS-CoV-2 spike protein” and “the spike protein is neurotoxic, and it impairs DNA repair mechanisms.”

Neither Pfizer nor Moderna has responded to a request for comment.

On its website, the Centers for Disease Control and Prevention (CDC) states COVID-19 mRNA vaccines won’t affect or interact with DNA, nor will the mRNA and the spike protein last long in the body.

“mRNA never enters the nucleus of the cell where our DNA (genetic material) is located, so it cannot change or influence our genes,” states the CDC. “Our cells break down mRNA and get rid of it within a few days after vaccination. Scientists estimate that the spike protein, like other proteins our bodies create, may stay in the body up to a few weeks.”

Cole said the vaccine manufacturers and government health agencies knew about mRNA vaccines’ problems but hid it due to their intertwining interests.

“We have known the immune modulation problems of this back since 2006, at the very least some papers there,” said Cole. “There is a reason Moderna had never brought an mRNA product to the market. And they had trials for genetic disorders. They were going to use this modality for gene modification. It never got to market because there were always too many animal models’ side effects. They knew about this. Did Pfizer know about this? Yes.”

“[The Food and Drug Administration (FDA)] is corporate-captured. Almost half of the FDA’s income and engrossing revenues come from Pharma,” said Cole. “CDC has 57, 58 vaccine patents … Do you think they have any interest in speaking ill of any vaccine? Of course not.

“The [National Institutes of Health (NIH)] holds the patent to the spike protein and the sequence, and they licensed that to Moderna. Every billion that the Moderna coffers get, so does the NIH. Is that intertwining government-corporate interest? You bet.”

The Epoch Times has contacted the FDA, CDC, and NIH for comments.

According to the FDA fact sheet, for fiscal year 2019, 54 percent of its budget was provided by federal budget authorization. The remaining 46 percent, or $2.8 billion, was paid for by industry user fees.

The CDC lists over 60 “vaccine and therapeutic candidates” technologies for licensing and collaboration on its website. The FDA has its own technology transfer program as well.

“Each year, hundreds of new inventions are made at NIH and CDC laboratories. Nine NIH Institutes or Centers (ICs) transfer NIH and CDC inventions through licenses to the private sector for further research and development and eventual commercialization,” NIH said.

According to Axios, in May 2020, then-NIH Director Francis Collins said, “We do have some particular stake in the intellectual property” behind Moderna’s coronavirus vaccine.

“Talking to the companies, I don’t hear any of them say they think this [vaccine] is a money-maker,” Collins said. “Nobody sees this as a way to make billions of dollars.”

“So nobody’s going to vote themselves out of a job in these agencies,” said Cole. “By denying these applications and application fees and drug reviews for all these large companies, they won’t have enough revenue to keep their agency going either. It’s really a paradoxical lose-lose.”

“Truth plus transparency equals trust,” said Cole. However, the government agencies are “destroying the public’s trust” in them.

Even the left-leaning New York Times recently reported that the CDC is withholding critical COVID-19 data on boosters, hospitalizations, and other analyses.

Cole said if he were in charge, he would have managed the COVID response in line with the Great Barrington Declaration.

“We protect the vulnerable. We knew who this was going to affect right away. We keep the schools wide open. We lock nobody down. We focus on early treatments. We knew from SARS COVID-1 that chloroquines work against this family of viruses. We go to old repurposed drugs like we always do with any new and emerging disease. We treat early. We recognize those who are COVID-recovered with natural immunity. And we don’t do what we did. You never let the cure be worse than the disease itself.”

Roman Balmakov
Follow
Roman Balmakov is a Reporter with The Epoch Times and host of the show, “Facts Matter.” He has travelled around the country (as well as overseas) covering protests, riots, and elections. He is also the producer of many Epoch Times’ commercials, both on TV and social media.
SHARE
Friends Read FreeCopyFacebookTweet
You May Also Like