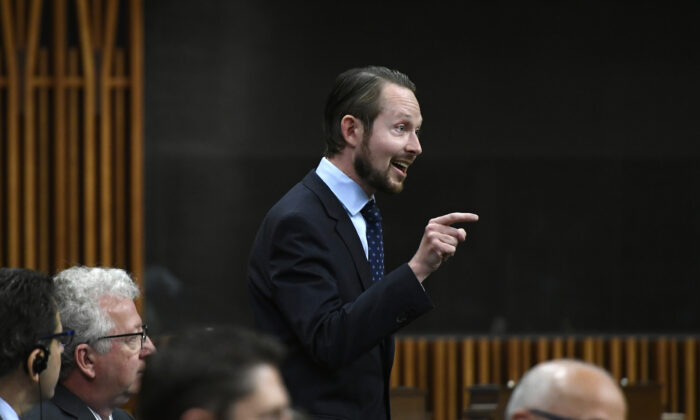 Conservative, Bloc, and NDP MPs are requesting an emergency House of Commons meeting to get answers over reports that the Chinese Communist Party (CCP) had “actively worked to influence” Canada’s federal election in 2019.

The allegations stem from a Global News report on Nov. 7 that intelligence officials had warned Prime Minister Justin Trudeau and several cabinet members in a series of briefings and memos in January that Beijing has been allegedly targeting Canada with an extensive campaign of foreign interference.

The campaign includes “covert funding to influence election outcomes,” the report said, noting that at least 11 federal candidates, whose party affiliations weren’t revealed, received funding from the regime in the 2019 federal election.

The report said that based on the information from the Canadian Security Intelligence Service (CSIS), the funding was allegedly funnelled through intermediaries to candidates affiliated with the CCP. Other alleged activities include placing agents into MPs’ offices to influence policy, seeking to co-opt and corrupt former Canadian officials, and launching aggressive campaigns against Canadian politicians whom the regime views as threats to its agenda.

The MPs’ letter was shared in a tweet by Conservative MP Michael Cooper on Nov. 9, who said, “It’s long past due for a plan to counter Beijing’s foreign interference ops on Canadian soil.”

The letter, addressed to the chair of the Standing Committee on Procedure and House Affairs (PROC), was co-signed by Bloc Quebecois MP Marie-Hélène Gaudreau and NDP MP Rachel Blaney, together with Tory MPs including Cooper, John Nater, Luc Berhold, and Blaine Calkins.

The signatories request that a meeting be held by PROC as soon as possible to “determine how the Committee should respond to this troubling revelation.”

In January, Justin Trudeau was briefed by CSIS about potential CCP interference in the 2019 election.

It's long past due for a plan to counter Beijing's foreign interference ops on Canadian soil.

We've requested an emergency meeting of the PROC committee to get answers. pic.twitter.com/Df9AgAORfx

‘Trudeau Needs to Explain Why’

The request for the emergency meeting was first announced by Conservative Leader Pierre Poilievre during a press conference in Vancouver earlier on Nov. 9. He said Trudeau “has failed to protect our democracy.”

“I think it’s very troubling that the prime minister has known about allegations of foreign interference in Canadian elections since … January, and he hasn’t taken any action,” Poilievre said.

“I think Justin Trudeau needs to explain why he knew and why he did nothing.”

In response to the Global News’ report, Trudeau said foreign state actors have been playing “aggressive games” with democracies.

“State actors from around the world, whether it’s China or others, are continuing to play aggressive games with our institutions, with our democracies,” the prime minister said on Nov. 7 during a press conference in Laval, Quebec.

“We have taken significant measures to strengthen the integrity of our elections processes and our systems,” he said. “We will continue to invest in the fight against election interference—against foreign interference—of our democracies and institutions.”

‘We Need to Do More’

The letter to the chair of PROC said otherwise.

“[F]ormer CSIS agents have criticized the government’s failure to take serious action to address or prosecute this foreign state interference in our democratic process,” said the MPs, who are also members of PROC.

PROC started its study on foreign election interference on Nov. 1 and has since heard testimonies from officials of Canada’s Security and Intelligence Threats to Elections Task Force, which consists of CSIS, Global Affairs, RCMP, and Communications Security Establishment.

In his testimony before PROC on Nov. 3, Adam Fisher, director general of intelligence assessments at CSIS, said China is the “foremost aggressor” in foreign interference in Canada.

“China … is more interested in working within the system to corrupt it, compromising officials, and elected officials, and individuals at all levels of government, within industry, within civil society, so using our open and free society for their nefarious purposes.”

Meanwhile, Foreign Affairs Minister Melanie Joly said Canada must “do more” to prevent Chinese interference when asked by reporters what should be done about recent allegations that China meddled in the 2019 federal election.

“For the past two elections, we had a committee that was working on these very issues and also we strengthened our processes, but I think we need to do more,” Joly said after making an announcement on Canada’s upcoming new Indo-Pacific Strategy at the Munk School of Global Affairs & Public Policy in Toronto, Ontario, on Nov. 9.

“We need to make sure that we tackle foreign interference at home, but I would say also particularly in the digital sphere.”

Peter Wilson contributed to this report.