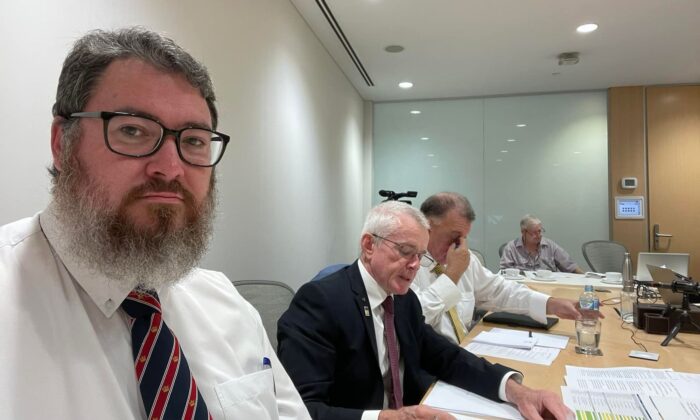 A group of Australian federal and state MPs have convened a cross-party inquiry into the country’s response to the SARS-CoV-2 virus, hearing from experts and victims of the state and federal government’s epidemic measures.

Among the speakers at the inquiry on March 23 was Dr. Phillip Altman, an Australian authority on clinical trials and regulatory affairs with decades of experience, who has challenged the prevailing narrative against the use of ivermectin in treating COVID-19, the disease caused by SARS-CoV-2.

In photos obtained by The Epoch Times, Altman is seen presenting slides on what he put forward as a “tsunami of misinformation” that flowed from officials to the public.

This included that lockdowns were useful in stopping the spread of the virus, gene-based COVID-19 vaccines were “safe,” children needed to be injected with gene-based vaccines, paper and cloth protective masks were effective, and that early treatment of COVID-19 was not necessary, among others.

In his presentation, Altman put forward a slide titled “Masterclass in Marketing,” with notes that the pharmaceutical companies that developed the COVID-19 vaccines bore no liability in Australia and that COVID-19 vaccines were given early provisional approval by the Therapeutic Goods Administration (similar to the FDA’s emergency use authorisations in the United States) based on limited data.

Altman’s slides also noted that the vaccines were paid for with taxpayer money in confidential deals between the federal government and the pharmaceutical companies and that these inoculations were then pushed onto the public.

COVID-19 vaccines have taken a central position in the Australian government’s response to the COVID-19 epidemic. For several months, at daily press conferences held by state and territory leaders, Australians have been told to get vaccinated and get booster shots.

At one stage in 2021, state leaders, particularly in Victoria and New South Wales, even refused to ease COVID-19 restrictions until 70 to 80 percent of the population was vaccinated. Then in late 2021, state governments began mandating COVID-19 vaccines for certain industries.

Since then, thousands have lost their jobs for choosing not to take what some experts have deemed experimental vaccines.

At the inquiry on Wednesday, Roberts posted a brief clip showing the proceedings to his Telegram channel on March 23. In the video, Roberts pans the camera around the table of MPs, showing a monitor featuring cardiologist and epidemiologist Dr. Peter McCullough and others joining virtually.

“A huge day of presentations being made to Craig Kelly, George Christensen, Gerard Rennick, Stephen Andrew, Alex Antic and I today at my forum, COVID Questioned,” Roberts wrote on Telegram.

“Hearing from Dr Peter McCullough here,” he said, referring to the monitor.

McCullough is a professor of medicine at Texas A&M College of Medicine in Dallas and is the editor of two medical journals. He has put his career on the line to express his views on the COVID-19 jabs in a climate in the United States where state medical boards have threatened to revoke the licenses of doctors based on the spreading of unidentified “misinformation.”

The inquiry comes after several months of pushback by the public and some politicians against state and federal vaccine mandates, and COVID-19 restrictions and lockdowns.

Conservative MPs Christensen and Antic have been steadfast in calling for the restoration of freedoms amidst COVID-19 restrictions, first imposed on the general public amid outbreaks, and later only on the unvaccinated.

Both MPs took to Facebook to speak about the inquiry.

“We will be speaking to victims of provisionally-approved medical procedures, small business, and workers victims of pandemic policies, medical experts and many others,” Christensen wrote on March 23.

“Today I am participating in a cross-party scientific and medical inquiry into COVID treatments, mandates, and responses organised by [Malcolm Roberts] along with Senator Gerard Rennick, Craig Kelly, and George Christensen among others,” Antic wrote on Facebook on March 23.

“We are hearing from pathologists, injured people, business owners, journalists, and health care professionals such as Dr. Peter McCullough.”

Roberts said on his Telegram channel that recordings of the proceedings will be released to uncensored platforms on Friday.