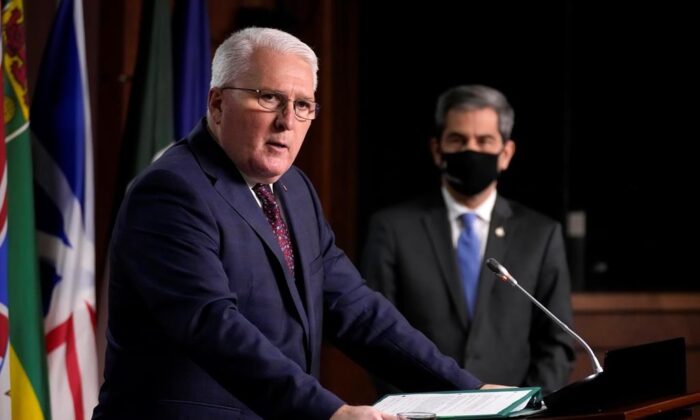 OTTAWA—Opposition MPs want the House of Commons ethics committee to investigate the Public Health Agency of Canada’s decision to collect data from millions of mobile phones to understand travel patterns during the COVID-pandemic.

Conservative and Bloc Quebecois MPs want the committee to hold emergency meetings this month while the House of Commons is still on its holiday break because the agency is seeking to extend the practice.

Tory MP John Brassard says the pandemic is being used as an excuse to undermine the privacy of Canadians who were unaware a government agency has been collecting cellphone data.

The collection only came to light last month after the agency sought to extend the practice last month.

Brassard says it is “extremely alarming” that a government body would use the pandemic as an excuse to secretly collect the mobile data of Canadians without telling them.

He wants to know what safeguards have been put in place to protect personal privacy.

A request for proposals issued Dec. 16 wants access to nationwide cell tower-based location data, stripped of personal identifiers, between Jan. 1, 2019 and May 31, 2023.

The notice says the data must be accurate, accessible and timely as well as ensure privacy and transparency.

Last week, Brassard wrote to Daniel Therrien, the Privacy Commissioner, and asked him to examine the matter. On Monday he wrote to Conservative MP Pat Kelly, who chairs the Commons Privacy committee, to ask for an emergency meeting.

Villemure said the committee has the power to demand the request for proposals be suspended and to launch an inquiry into the affair to reassure Canadians about what is being done with their personal data.

The Public Health Agency has said analysis of location data helps inform policy, public health messaging, evaluation of measures and other aspects of the government’s response to the pandemic.