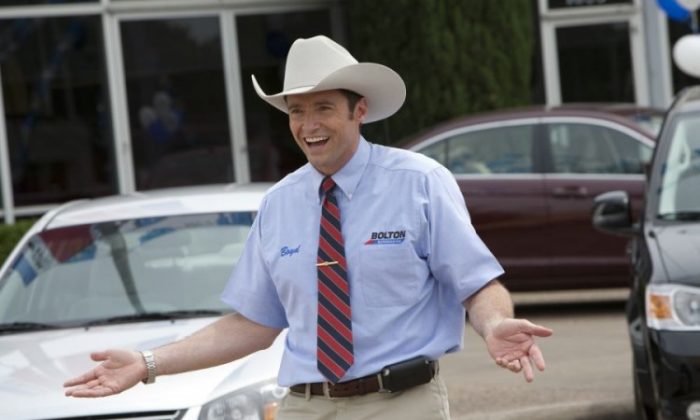 Hugh Jackman in the comedy “Butter.” (Courtesy of The Weinstein Company)
Entertainment

Bob and Laura Pickler (Ty Burrell and Jennifer Garner) are a swell couple from Iowa! He’s a renowned champion. Of what? Butter carving. He’s carved The Last Supper, and he’s even carved … Schindler’s List. Schindler’s List! In butter!

Bob’s been top butter dog for 15 years running. He finally gets asked to step down (so someone else can have a shot at it already, for crying out loud).

The status of grand butter pooh-bah involves certain perks, and Bob’s wife Laura is loathe to relinquish any of them. It’s not just anyone who gets to be the first lady of butter carving. She’s backed him all these years, so now she feels highly entitled to get her some. She’s been paying attention. (How hard could it be?) So she enters the next contest herself.

In a parallel universe, er, storyline, we are introduced to a small African-American girl’s many experiences with foster homes and adoption. She’s 10 years old and her name is Destiny (Yara Shahidi).

Turns out, she’s seen butter king Bob Pickler’s work at a local fair, tried her hand at carving, and was acknowledged by the great Bob himself as having exceptional talent. She’s eventually adopted by Julie and Ethan (Alicia Silverstone and Rob Corddry)—a couple from Bob and Laura’s neighborhood.

And so who should enter the next great butter-carving contest? Well, cough—current presidential candidates—cough! Ahem, Laura and Destiny of course. As well as a contestant from a third storyline. Turns out, buttery Bob’s been seeing a lady (Olivia Wilde) who, among other things, dances on elevated stages that have poles on them. He owes her money.

By Anyway, Laura’s got her work butter-carved out for her. It doesn’t help things that her ultracool stepdaughter Kaitlen (Ashley Greene from Twilight) constantly disses everything she does. Kids these days.

Naturally, Laura will to do whatever she needs to win. That Destiny kid’s too talented, smart, and cute; there clearly needs to be some, you know, Butter-Gate activities to even the playing field. Who can help with the break-in and burglary? She knows just the man—her former dim-bulb boyfriend Boyd (played by Hugh Jackman). Dirty, dirty politics, tsk-tsk!

Butter is reminiscent of other movies about competitions. Best in Show comes to mind. On one level it’s a portrait of rural, small-town USA; on another it’s all about politics as usual.

There’s a fair amount of un-PC commentary by Laura about people of color, which serves to underscore the fact that the film is more or less poking fun at the 4-H club-attending, pie-baking, cow-comparing, butter-carving, “red state” demographic.

A favorite quote: When Destiny and her dad sit in a car and trade quips about how evil Laura might be, dad Ethan says, “She used to buy this fake meat called “seitan.” Destiny asks, “You mean like the devil?”

This reviewer is not a no-holds-barred fan of the emergence of the R-rated comedy in the last few years. It’s usually a cheap ploy to force laughs with the shock value of torrents of X-rated cursing juxtaposed with otherwise benign settings. Especially the torrent of curse words as spewed by children.

In this election season, we’re inundated with the usual political jousting, subtle fabrications, outright lies, tattling, and other forms of campaign competition at its worst. Hollywood, to a fault, promotes happy endings, and Butter is no exception. Let’s hope our political future is a case of life imitating art. It butter be.