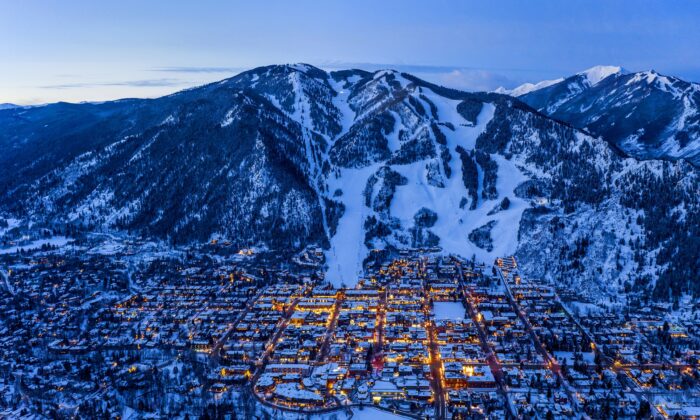 Aspen lights up at sunset. (Dan Bayer)
By Nathan Worcester

The Aspen Institute is holding an invitation-only event, the “Aspen ESG Summit,” at a time when rising energy prices, novel climate mandates, and growing global instability have made environmental, social, and corporate governance (ESG) a subject of controversy.

Headquartered in the upscale mountain resort town of Aspen, Colorado, the Aspen Institute aims to “turn ideas into action and impact for individuals and society,” according to its mission statement.

It also received at least a million or more dollars from the U.S. State Department and Walmart, respectively.

The Aspen Institute describes itself as values-based but non-partisan. It doesn’t fund political candidates or parties.

“We do not engage in electoral politics or any activity that would require registration under the Lobbying Disclosure Act of 1995, and do not engage staff or contractors as ‘lobbyists’ as defined by the Act,” it states on its website.

Some sources have characterized the organization as left-leaning. In 2019, The Economist described it as “the mountain retreat for the liberal elite.”

Fox News’ Tucker Carlson has also taken aim at the Aspen Institute. In his current Twitter bio, he sarcastically calls himself a “frequent visitor to the Aspen Inst.”

In an April monologue, Carlson alluded to its influence when criticizing former President Barack Obama’s Stanford University speech on disinformation.

“So me and my friends at the Aspen Institute need to be in complete control of every word uttered, or else it’s not democracy,” he opined.

ESG was recently slammed by Elon Musk, who described it as a “scam” after the S&P Global Index removed his pioneering electric car company, Tesla, from its ESG Index. In addition, the treasurers of many energy-producing states in the United States believe they have been unfairly penalized by new ESG ratings.

Representatives of the United States’ largest banks and other companies are also slated to speak at the Aspen Institute’s summit, which runs July 11–July 14.

One “dialogue stream” at the event is titled, “(How) Should ESG Leaders Support Democracy?”

“Threats to democracy have upended business as usual domestically and abroad. Why should ESG leaders care? Are ESG leaders playing a role in operationalizing the pro-democracy commitments their firms have made—or how might they, while still doing their day job?” the agenda states.

In a 2021 set of “Predictions for Business and Society in 2022,” the Aspen Institute’s Judy Samuelson praised employees who, “in the wake of January 6th,” were the ones to connect their “company’s PAC [political action committee] to support of elected officials engaged in anti-democratic behavior.”

“As we move toward midterms, concern for our democracy will only grow—and businesses, particularly those that are active in the pay-to-[play] system that dominates our political system—will again be under the microscope of employees,” she wrote at the time.

The Aspen Institute didn’t respond by press time to requests by The Epoch Times for comment.