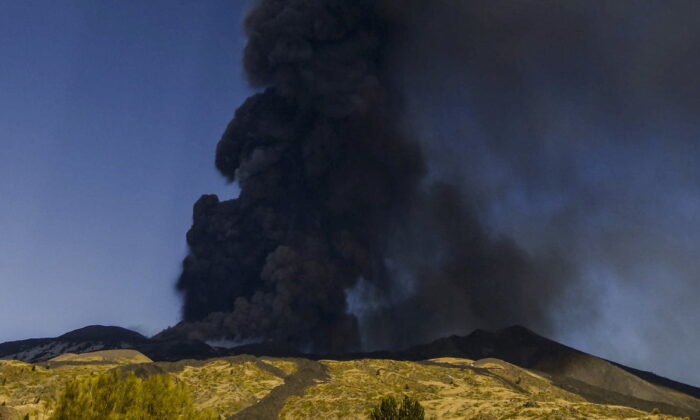 ROME—Mount Etna has roared back to spectacular action after a few months of relative quiet, sending up a 7.5-mile high volcanic ash cloud over eastern Sicily.

The lava flow from Etna, one of Europe’s most active volcanoes, was centered around the crater on the mountain’s southeast slope, Italy’s National Institute of Geophysics and Vulcanology said Monday.

There were no immediate reports of injuries or property damage on the inhabited towns ringing the slopes of the volcano, which is popular with hikers, skiers, and other tourists.

By Monday afternoon, the lava flow from the crater had stopped, the institute said. But earlier in the day, while the volcanic cloud was pouring out of Etna, the institute issued a warning for aircraft in the area.

The towering cloud, visible for kilometers, was the latest impressive show of Etna’s power this month. Earlier in February, a particularly powerful eruption sent bolts of lightning dramatically across the sky over eastern Sicily.

Etna has had scores of known eruptions in its history. In 1669, in what has been considered the volcano’s worst-known eruption, lava buried a swath of Catania, the largest city in the east on the island of Sicily, and devastated dozens of villages.

More recently, in 1983, dynamite was used to divert lava threatening towns. In 1992, the army built an earthen wall to contain the lava, flowing from Etna for months, so it wouldn’t barrel into one of the villages on the slopes.