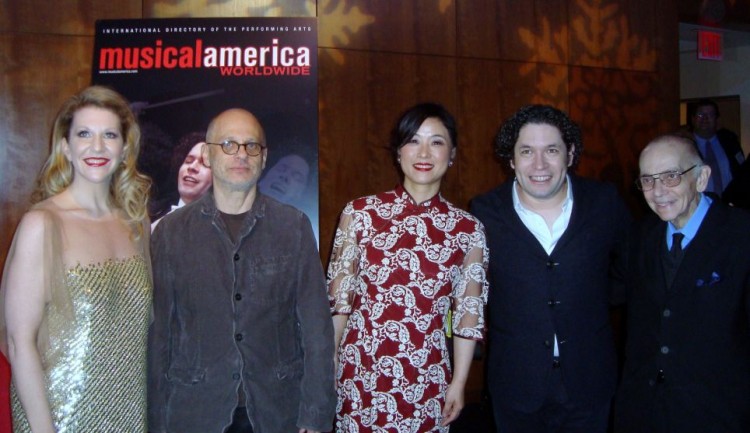 A China-born musician used her 2,000-year-old instrument to traverse her musical Silk Road from the East to the West. She opened a dialogue between traditional Chinese culture and America’s prominent composers.

A 31-year-old man soared from a small town in Venezuela to the post of music director for one of America’s most celebrated symphony orchestras. He has become one of the most decorated conductors today.

An American diva has been admired for her interpretations of the works of Handel, Mozart, and Rossini. She won a 2012 Grammy Award for Best Classical Vocal Solo.

A Pulitzer Prize winner in music, this prolific composer who is deeply rooted in the classical tradition, defies any categorization.

These were the honorees on Dec. 6 at New York’s Lincoln Center by Musical America, an entity that gives out some of the most prestigious awards in the international performing arts industry.

The winners came from different cultures and continents, speak different native languages, both linguistically and musically, but they were honored at Musical America’s Annual Award Ceremony for the same reason: They have created a profound impact on our world by touching people’s lives, uplifting the human spirit, and crystallizing music’s noble mission to serve humanity.

Dr. Abreu has made music a social instrument to instill love, joy, and prosperity. To Abreu, music is not a means to achieve personal goals of money and fame. In his words, “Music is practically the only way to a dignified social destiny” for the children that he works with. “Poverty means loneliness, sadness, and anonymity. Orchestra means joy, motivation, teamwork, the aspiration to success.”

Abreu’s project, The National System of Children and Youth Orchestras of Venezuela (NSYO) involves 110,000 people working for 120 youth orchestras, 60 children’s orchestras, and a network of children’s choirs, according to rightlivelihood.org.

Instrumentalist of the Year: Wu Man

This year, for the first time in Musical America’s over 100-year history, a traditional Chinese instrumentalist was selected to receive this prestigious award in the Western classical music industry.

Clad in a traditional Chinese laced dress, the pipa player Wu Man gave a moving speech when accepting the award. About 20 years ago, she came to the United States with little spoken English and a suitcase of seven traditional Chinese instruments, their combined ages totaling over 5,000 years.

Wu didn’t know whether there would be an audience in the West for her beloved pipa—a plucked instrument. The instrument can be seen in the hands of heavenly maidens depicted in the mural paintings of the Buddhist grottoes on the historical Silk Road.

Through close to 20 years of an amazing journey in the West, Wu Man has given the pipa a new voice that allows this ancient Chinese instrument to enrich the music world of the 21st century.

“For the first time in the history of my instrument, the pipa has played with a Western symphony orchestra, joined the Central Asia master musicians, sang with Taiwanese aborigines, and premiered the works of many of today’s most prominent composers like Philip Glass, Terry Riley, the late Lou Harrison, Tan Dun, Bright Sheng, [and] Chen Yi,” Wu Man said.

“My concert tours have opened the eyes of many people to the unique style and rich sounds of Chinese music.”

Wu Man attributed her success to the boundless opportunities that America has to offer. “America nurtured my growth as a musician, performer, and educator. America also challenges me to sing, act, compose, to make film, and not to be afraid to keep pushing the limits of what I and the pipa are capable of doing musically.”

Wu said she was very happy to realize her dream of not only preserving the pipa as a timeless asset to Chinese culture, but also of offering its unique sound to the 21st century’s musical family to be cherished by the whole world.

Asked how Wu was chosen to be one of this year’s honorees, Sedgwick Clark, editor of Musical America International Directory of the Performing Arts, said, “We’ve been wanting to honor her for a long time!”

Vocalist of the Year: Joyce DiDonato

Hailed by the New York Times as the “perfect 21st century diva,” Joyce DiDonato, a 2012 Grammy Award Winner is Musical America’s 2013 Vocalist of the Year.

DiDonato exuded graceful humility and effortless elegance in her acceptance speech at the award ceremony.

She thanked Musical America for providing a critical step in her path to success. When she was searching for information before pursuing her vocal studies, she turned to the bible of the performing arts industry—Musical America’s annual directory of arts organization.

There she found Philadelphia’s Academy of Vocal Arts, the world’s premier vocal arts institute that provides first class training for young artists and grooms them for future success on international stages.

Speaking with a voice described by Times magazine as “nothing less than 24-carat gold,” Joyce DiDonato said she was humbled by the presence of the all other award winners as well as the long list of Musical America’s honorees in the past several decades.

Musician of the Year: Gustavo Dudamel

The 31-year-old Venezuela-born music director of the Los Angeles Philharmonic is this year’s Musician of the Year. He is responsible for creating a far-reaching impact on the communities from his native Caracas to those of Hollywood.
Influenced by Dr. Abreu’s idealism and the success of NSYO in Venezuela, Dudamel created Youth Orchestra Los Angeles (YOLA), which has reached countless children in Los Angeles’s underprivileged communities.

Composer of the Year: David Lang

The winner of the Composer of the Year award, David Lang, is perhaps the most usual-looking honoree at the award ceremony. Dressed in deceptively plain and casual clothes, Lang possesses an exceptionally demanding mastery of music creation.

Lang is well known for “The Little Match Girl’s Passion”—a 2008 Pulitzer Prize winner. A co-founder and co-artistic director of New York’s legendary Bang on a Can, David Lang is one of America’s most performed composers. He is a musical entrepreneur, tireless in inventing music that demands the world listens.

Founded in 1898, Musical America is a top publication for the international performing arts industry. Its annual directory, renowned in the industry, features over 14,000 detailed listings of worldwide arts organizations, with over 8,000 artists indexed. Every year, the Musical America Directory honors outstanding musicians of all kinds (composers, conductors, instrumentalists, vocalists, and so on).