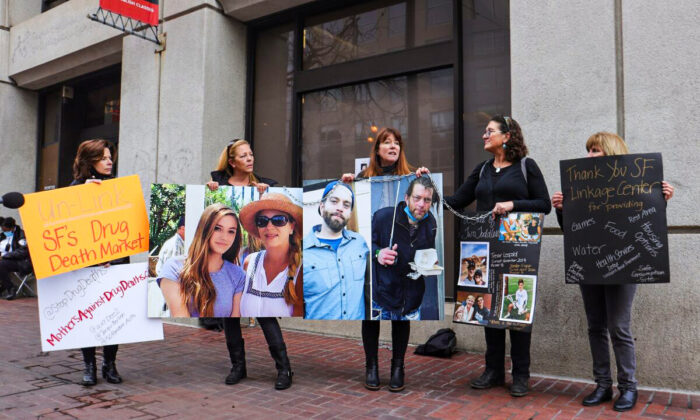 SAN FRANCISCO—A small group of women stood together in front of San Francisco’s Tenderloin Linkage Center near the United Nations Plaza at the Civic Center on Feb. 5 to express their opposition to the alleged open-air drug use taking place at the facility.

The linkage center was created to help people who are homeless or dealing with drug addiction gain access to short- and long-term resources, such as food, shelter, substance abuse treatment, and vocational support.

Holding a chain and posters with photos of young adults, the group, Mothers Against Drug Deaths, said they were mothers whose lives have been changed by the effects of the ongoing drug crisis. They told NTD Television that they have children who are struggling with or lost their lives to drug addiction.

Gina McDonald compared the alleged drug use in the linkage center to going to an Alcoholics Anonymous meeting in a bar.

“You don’t have an AA meeting in a bar. You don’t hand a loaded gun to a person that’s suicidal,” McDonald said. “I’m very disappointed in how the City of San Francisco is handling this linkage center. I very much agree with services being provided for people with addiction and people living on the street. But I don’t feel that allowing open drug use inside the fence is in any way going to help addicts out there. I’m a recovering addict myself.”

McDonald said she was “in a meth-induced psychosis” when the Alameda County Sheriff’s Office picked her up and mandated treatment.

McDonald said her daughter was proud when she heard that her mom was going to the protest.

The Tenderloin Linkage Center opened on Jan. 18 as part of Mayor London Breed’s December 2021 state of emergency declaration for the Tenderloin drug crisis. The city’s Department of Emergency Management (SFDEM) runs the center.

According to a report by the San Francisco Chronicle, the SFDEM has denied running a supervised drug consumption site at the linkage center.

“This site is about getting people connected with immediate support, as well as long-term services and treatment,” Francis Zamora, a spokesperson for SFDEM, previously told the SF Chronicle. “Part of being a low-barrier site means bringing people in without asking a lot of questions.”

However, a week following the center’s grand opening, the Daily Mail revealed photos of open drug use behind the tarp-covered fence connected to the center. Photos captured people smoking, injecting themselves, and partaking in drug deals.

In 2020 [pdf] and 2021 [pdf], San Francisco reported a total of 1,347 drug overdoses, nearly double the 692 reported COVID-19 deaths in the same time frame. Approximately three-quarters of all overdose victims had fentanyl, a powerful synthetic opioid, in their systems.

On the same day as the protest, another group of people gathered for a counterprotest.

One of them was David Campos, a former city supervisor. Campos said an open safe space for drug use could be an effective way to tackle addictions, noting that he tried to introduce the idea in 2016.

Similarly, Breed and state Sen. Scott Wiener have pushed for “safe injection sites” in recent years. Wiener introduced Senate Bill 57 in 2020 to establish these sites, but the legislation has yet to be approved by the State Assembly.

However, the idea of open drug use sites falls into a legal gray area, given that federal laws prohibit the use and sale of schedule 1 drugs (marijuana, heroin) and schedule 2 drugs (fentanyl, meth, cocaine).

During the protest, the mothers repeatedly expressed their support for harm reduction, the linkage center, and its goals, but they remained resolute that drug use shouldn’t be allowed there.

Other mothers shared that the drug crisis either changed or took the lives of their children.

Jacqui Berlinn said her son, Corey, is currently living on the streets of San Francisco after developing an addiction to fentanyl.

“My son will tell you himself that it’s very, very easy to remain an addict in San Francisco,” she said. “He says you can get everything you want and need in San Francisco to stay in your addiction.”

Berlinn said she was excited when she heard about the linkage center’s opening, but her heart dropped after she learned that people were using drugs at the site. She said Corey dropped by the center, but he left after seeing people using drugs in the fenced-off area outside of the building.

“My hope was that it was going to be a safe space for him just to have 30 minutes, 60 minutes, two hours free of drugs in his face,” Berlinn said.

She’s currently still trying to find her son after seeing photos of him shared online.

Another mother, Michelle Leopold, said her son Trevor died from a fentanyl overdose in 2019 when he was a freshman at Sonoma State, and now, “he’s forever 18.” She said Trevor had struggled with addiction for years and overdosed in his dorm room after purchasing a counterfeit oxycodone pill that he didn’t know was made with fentanyl.

“I don’t want any more moms to have this title that has no title,” Leopold said. “There’s widow. There’s orphan. There is no word for a mom who’s lost her child, because it is the worst thing in the universe.”

In front of the linkage center, a handful of people told The Epoch Times and NTD Television that they suspect that the area surrounding the center had been cleaned in anticipation of press presence.

“My understanding is that any day besides today—we have pictures of other days—that people have been here with open-air drug dealing,” Leopold said.

When walking through the United Nations Plaza to the linkage center, Epoch Times and NTD reporters noticed that the surrounding area was clean and free of the usual trash. People dressed in jackets with an Urban Alchemy logo were seen cleaning the streets and sweeping away needles, old masks, and other trash.

The reporters stopped to speak with one of them. The man said Urban Alchemy helps keep San Francisco’s streets clean and checks up on homeless people living on the streets. Nearly a dozen police officers were patrolling the area as well.

While reporters were covering the protest, a woman exited the linkage center yelling profanities. She knocked over a sign at the entrance and rushed toward an NTD reporter who was taking photos.

The woman pushed the reporter backward into a street pole and unsuccessfully tried to grab the reporter’s phone. The reporter was uninjured, but the woman was arrested and taken away for a mental assessment.

As the protest drew to a close, paramedics showed up and entered the linkage center with a stretcher. It remains unknown exactly what happened.

The San Francisco Department of Emergency Management and the Mayor’s Office didn’t return requests for comment.