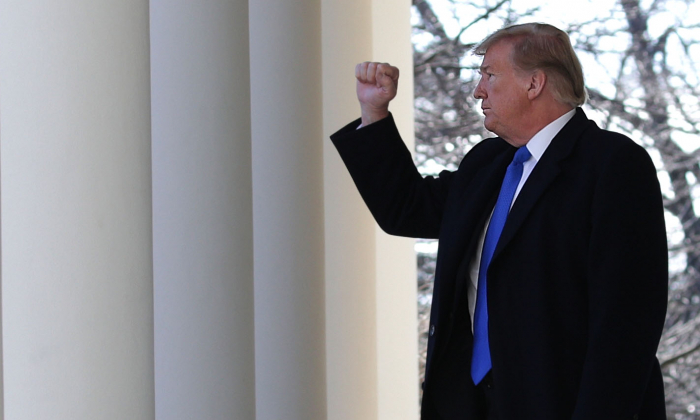 President Donald Trump holds up his fist after he spoke on border security at a Rose Garden event at the White House in Washington on Feb. 15, 2019. (Alex Wong/Getty Images)
Trump Administration

A majority of Americans believe officials from the Department of Justice and the FBI committed a crime by discussing the removal of President Donald Trump in 2017, according to a survey released by Rasmussen Reports on Feb. 19.

Most Americans also believe a special counsel should be appointed to investigate the crime, the survey found.

Former FBI Deputy Director Andrew McCabe alleged in an Feb. 17 interview with Scott Pelley of CBS’s “60 Minutes” that officials at the Department of Justice held meetings in 2017 to discuss if enough members of Trump’s cabinet could be brought together to remove the president by invoking the 25th Amendment. McCabe walked back his comments after backlash from critics who said the discussions amounted to an attempted “palace coup” against an elected president.

The survey found that 56 percent of likely American voters believe the senior officials involved in the discussions about removing the president likely violated the law. Fifty-one percent told Rasmussen that a special counsel should be appointed to investigate the potential crime.

The results of the Feb. 19 survey are similar to those conducted by Rasmussen in April 2018. Fifty-four percent of likely voters agreed at the time that a special counsel should be appointed to investigate whether the investigations of Hillary Clinton and Trump were conducted legally and without bias.

McCabe was fired from the FBI for authorizing a self-serving leak and lying about it to investigators multiple times, including under oath. He had been under a grand jury investigation for months as of September 2018, according to The Washington Post.

The survey has a 3-percentage-point margin of error.