Most Americans Oppose Sending US Troops to Ukraine to Fight Russia: Polls 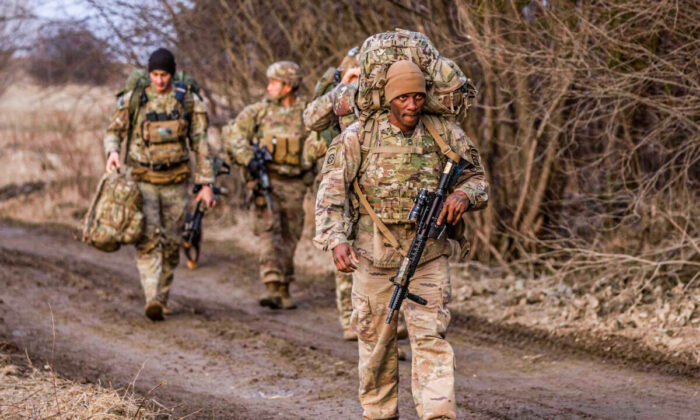 US soldiers walk in Poland near the border with Ukraine, on March 3, 2022. (Wojtek Radwanski/AFP via Getty Images)
By Zachary Stieber

Most Americans don’t support the idea of sending U.S. troops to Ukraine to help Ukrainian forces fight against Russian personnel, according to surveys.

Just 19 percent of respondents to an Economist/YouGov poll said sending U.S. soldiers to Ukraine is a good idea, compared to 54 percent who thought it was a bad idea. The rest weren’t sure.

More respondents, 33 percent, said it was a good idea to send soldiers to Ukraine “to provide help,” but not to fight Russian soldiers.

Sixty-three percent of respondents to a Reuters/Ipsos poll (pdf) said the United States should not send troops to Ukraine to help defend Ukraine from the Russians. The rest said troops should be sent.

A majority of respondents to a poll (pdf) from SSRS for CNN also opposed the United States taking military action to stop Russia.

President Joe Biden has vowed not to send U.S. troops to Ukraine in the wake of the Feb. 24 Russian invasion.

“Let me be clear: Our forces are not engaged and will not engage in the conflict with Russian forces in Ukraine,” the Democrat said during his State of the Union speech.

Biden’s administration has sent troops to Europe and the president has committed to joining the fight if Russia attacks any North Atlantic Treaty Organization (NATO) allies.

The administration has also shipped weapons and other military aid to Ukraine to help Ukrainian troops fight back against the invasion.

According to the surveys, most Americans support helping Ukraine.

A plurality of respondents told YouGov that it would be a good idea to impose a no-fly zone over Ukraine, even though many experts have warned that would mean the United States had joined the war on the Ukrainian side.

Many respondents to the polls support providing weapons to Ukraine and imposing additional sanctions against Russia. Nearly half of respondents to YouGov said Ukraine should be allowed to join NATO; about a third were unsure.

A minority of U.S. lawmakers say the United States should impose a no-fly zone or otherwise get more directly involved in the war, but most have said the current level of involvement is appropriate.

Other countries have also opposed so far sending their troops to Ukraine, including 40 percent of British respondents to a poll by Redfield and Winton.