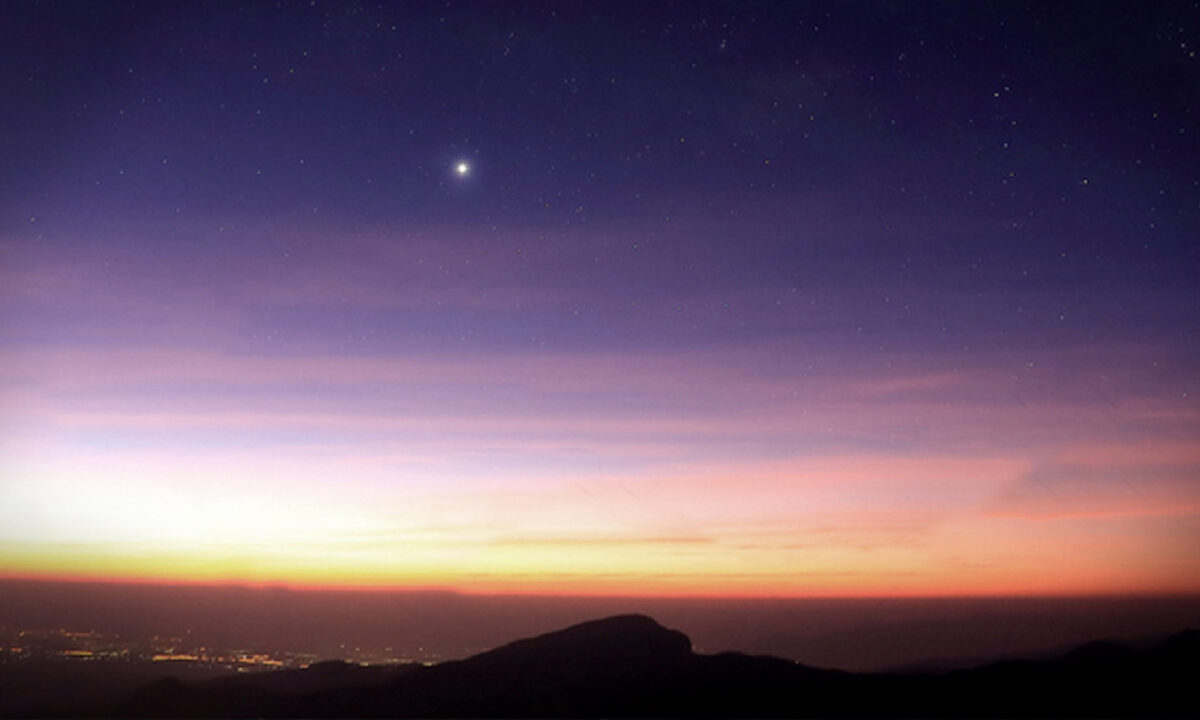 This particular week in February coincides with the rise of the “morning star,” like a diamond in the sky, Venus—the brightest planet in our solar system whose orbit around the sun travels just inside our Earth’s.

On Feb. 8, Venus reached its “inferior conjunction,” aligning between Earth and the sun just before shifting over from being in our evening to morning sky (its “superior conjunction” being it’s alignment directly on the far side of the sun). From Wednesday morning, Venus will shine at its very brightest, an event known by astronomers as its “greatest brilliancy”—from which it earned its moniker “morning star.”

But besides this, there’re still more planetary spectacles in store this month, including appearances from Mars, Mercury, and the moon to join Venus in a lunar/interplanetary lineup, and more!

Here’s what you need to know.

From Feb. 9: How to Catch The Morning Star

To best view this sparkling jewel, look to the east 30 minutes before sunrise, just above where the sun will break the horizon. It’s advisable, according to EarthSky.org, to position a foreground object, such as a tree, between yourself and the sunrise to get the best view of Venus. You can track the planet until 30 minutes after sunrise as the sky turns blue. And for the rest of February (at this time just before and after sunrise), this shimmering diamond of a planet—named after the Roman goddess of love—will continue shining brilliantly.

But that’s not all this month has in store; there are yet more celestial sights to behold!

Between the days of Feb. 11 and 16, keep watching Venus just before twilight till after sunrise and two more planets will make their appearances nearby: Mars and Mercury. Forty minutes before daybreak, looking southeast, slightly below and south of Venus, the red planet Mars—whose orbit travels outside Earth’s—will appear, beginning a new cycle of visibility after traveling behind the sun up until late December.

Lower in the sky, observers with a clear southeastern horizon may also catch Mercury—the planet nearest the sun, named after the Roman messenger god—slightly north of Venus and Mars. On Feb. 16, Mercury will be at its “greatest angular distance” (when it appears farthest from the sun, thus making it easier for us to see) as viewed from our Earthly vantage point.

These three planets together plus the Earth under our feet comprise all four major rocky planets of our solar system—all visible at the same time!

After Feb. 16, however, the brightness of the morning twilight will soon overpower Mercury’s dwindling light, and it won’t be easily seen from northern latitudes anymore.

Yet another heavenly spectacle lies in wait this month. On the 27th, the morning star and red planet—named after the Roman god of war—still lingering above the horizon before sunrise, will hover slightly above and line up with the waning crescent moon—called the “old moon” by astronomers. But this lunar sliver of light will be so thin as to be nearly invisible, except to experienced observers possibly with an optical aid.

Last but not least, our solar system’s second brightest planet, the gas giant Jupiter—named after the Roman king of the gods—by mid-February will still be visible (as it was earlier this month) just above the horizon at sunset. In the days and weeks following, though, the sight will be obliterated by the glare of the setting sun.