Morgan Stanley Warns of Something Worse Than a ‘Normal Recession’ 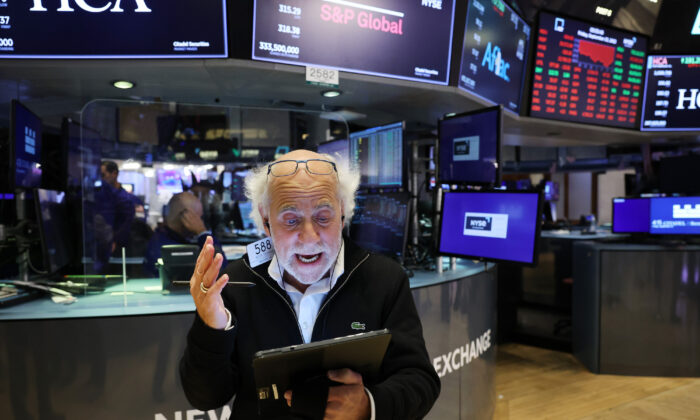 Traders work on the floor of the New York Stock Exchange in New York City, on Sept. 23, 2022. (Spencer Platt/Getty Images)
By Tom Ozimek

Morgan Stanley’s Chief U.S. Equity Strategist Michael Wilson said that he’s convinced a corporate earnings recession is coming—and that it could be worse than a “normal” recession.

Wilson said in a Sept. 26 interview with CNBC’s “Squawk Box” that his team at Morgan Stanley is looking closely at the U.S. business earnings story and the impact of corporate profits on equities, which have been on a wild ride in recent months.

“We think it’s unavoidable … to avoid an earnings recession and that’s what matters for stocks,” Wilson said, with his remarks coming on the same day that the so-called Wall Street fear gauge soared to its highest level since mid-June when U.S. equities last hit a bear market bottom.

The CBOE Volatility Index, known as the VIX, tracks the 30-day implied volatility of the benchmark S&P 500 and is seen a measure of stock market investor fear.

The volatility gauge surged to a reading of 32.88 on Sept. 26, its highest level since it closed above the psychological barrier of 30 in the middle of June amid a sharp stock selloff.

Wilson told CNBC that a relatively strong run of economic data, in particular labor market indicators, give room for the Federal Reserve to continue with its aggressive rate hikes, complicating the outlook for risk assets.

“Economic surprise data has actually been to the upside lately,” Wilson said. He added that until more economic indicators roll over—for instance when we see U.S. factory PMIs in the 40s and other indicators like jobless claims jumping to a level “that would indicate we’re going to have a true unemployment recession” and until the dollar peaks and begins to ease—then the bottom will likely be in for stocks.

“It’s all inter-related,” he continued. “Whether it’s earnings or whether it’s the economy, we’re in a cyclical downturn for growth and that’s the fire and ice scenario to a tee,” he added, referring to the Fed hiking rates at the same time as growth slows.

Americans have seen their nominal wages go up but soaring prices have pushed real wages—which are adjusted for inflation—down, putting pressure on consumers, Wilson pointed out.

“It’s a difficult setup,” Wilson said. He added that what’s different about this downturn is that companies might be inclined to hold on to workers longer than normally due to labor shortages and the expected challenge in hiring staff once the economy picks up again.

Businesses reluctant to cut staff in the face of deteriorating economic conditions and as demand falls would put more pressure on profit margins, he warned. This could lead to a situation where unemployment doesn’t move up meaningfully but corporate earnings plunge.

“That’s another risk to our earnings story,” Wilson said. “Whether there’s a recession or not, because you could have a situation where you don’t get an employment cycle, but the earnings recession is actually worse than if you had a normal recession.”

Separately, in an analytical note cited by Bloomberg, Wilson and his team of strategists said the soaring dollar was creating an “untenable situation” for stocks and this, combined with central banks tightening policy “at a historically hawkish pace,” means that odds are growing for “something to break.”

Wall Street slid deeper into bear market territory on Sept. 23, with the S&P 500 and Dow closing lower amid investor concern that a hawkish Fed would keep tightening monetary settings aggressively and tip the economy into a sharper downturn.

The S&P 500 confirmed in June it was in a bear market, and on Sept. 26 it closed below its mid-June low, extending this year’s selloff.

In its most recent summary of economic projections (pdf), the Fed expects to raise rates to 4.6 percent in 2023. The current Fed Funds rate is in the range of 3.00–3.25 percent.

The Fed also expects to see unemployment rise from the current 3.7 percent to 4.4 percent by next year.