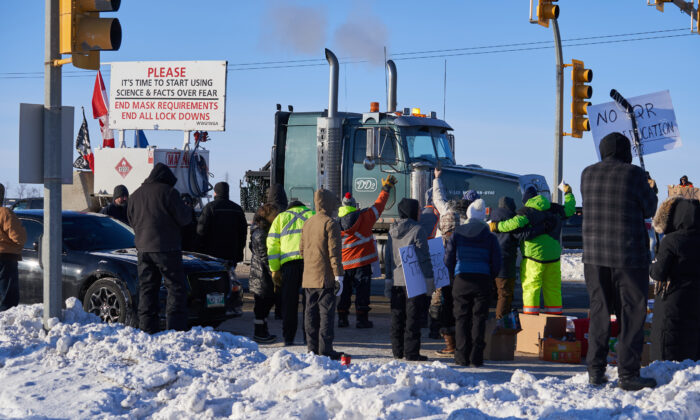 Supporters of Canadian truck drivers protesting the COVID-19 vaccine mandate cheer on a convoy of trucks on their way to Ottawa, on the Trans-Canada Highway west of Winnipeg on Jan. 25, 2022. (The Canadian Press/David Lipnowski)
Canada

More Than a Trucker Protest: People Upset by Loss of Freedoms Share Why They Support Massive Convoy

As truck drivers and supporters from both coasts continue their trek to Ottawa to rally on Parliament Hill on Jan. 29, backing is surging for the movement that started as a protest against vaccine mandates for truckers.

Dubbed Freedom Convoy 2022, trucks from Prince Rupert and Vancouver began their trek east on Jan. 22 and 23 respectively, while another group from Newfoundland began their journey west on Jan. 25. Other trucks and personal vehicles continue to join along the way.

A GoFundMe page created to help drivers with costs for fuel, food, and lodging has raised over $5.2 million at the time of publication, with close to 68,000 donors.

People wanting to back the truckers’ cause have either taken their personal vehicles and joined the journey to Ottawa or given their support at strategic locations along the highways with cheers, signs, and banners.

Grade 12 student Rowan Stone drove three hours from her home in Cranbrook, B.C., to Golden, B.C., where she waited another two hours for the trucks to drive past to flash her homemade sign showing her support.

Diagnosed with an autoimmune disease last year, she is against government-imposed vaccine mandates, has lost friends due to her stance, and is losing something just as valuable to her because she has not taken the COVID vaccine.

“I found out that I had to be vaccinated to go to prom this year,” Stone told The Epoch Times. “And my mom can’t even come to my commencement because she’s not vaccinated.”

Moore’s Produce in Listowel, Ontario, backs the trucker movement. Because Moore’s is a small trucking company and can’t afford to have its drivers participate in the convoy, general manager Dave Nicholson told The Epoch Times that his company could show its support through a donation to the GoFundMe campaign.

“We’re just supporting fellow truck drivers,” Nicholson said. “We felt as a sign of solidarity we should be behind them on their mission to gaining independence and making sure they all had jobs. So we are behind them 100 percent.”

Sean Tiessen is one of the B.C. organizers of Canada Unity, the organizing body behind the convoy, and is participating in the trek himself. When he was more than 100 kilometres west of Winnipeg, Tiessen told The Epoch Times that traffic was heavy. By the time the trucks reached Headingley, just outside of Winnipeg, they could barely move.

“It was gridlock—amazing gridlock,” Tiessen said. “I have never loved gridlock so much in my life. And there were people parked all along the side, and they’re all cheering and there’s no negativity. All positive.”

Tiessen described the convoy as more than truckers standing for their own freedom, but as citizens standing in unison for the freedom of all people affected by vaccine mandates.

“We want to make sure that people are being represented and don’t have their issues forgotten or overlooked,” he said. “This mandate madness, that’s why we’re doing this—making sure everybody is aware of all this and cognizant of the troubles that it’s causing for people. We want to show them all that we’re there for them and we’ll do whatever we can to help.”

Meanwhile, in Newfoundland, Chad Curnew helped organize a group of 12 provincial truckers who left for Ottawa in the early morning of Jan. 25, planning to have others join them once they get to the mainland. Canada’s most eastern province, as an island faced with limits to its farming and other industries, depends heavily on truck drivers to bring them food and supplies, Curnew said in an interview.

“We’re standing up for freedom, for getting our freedoms back,” Curnew said. “We have no choice but to support the movement because we’re on the island. It’s been harder for farmers to actually farm here, so we’re leaning more on the support of other farmers across Canada to bring food over to us.”

Melissa Perepelkin used to work for the federal government. Like Stone, she hasn’t taken the vaccine and no longer works for the government. She was present to cheer on the convoy as it drove through Saskatoon on Jan. 24, and is optimistic it will make a difference once it reaches Parliament Hill.

“I’m happy that people are finally taking a stand, and a lot of us have put hope in this whole convoy,” Perepelkin said. “My hope is when they get to Ottawa, they apply enough pressure, along with public social pressure, that will force government to make changes.”