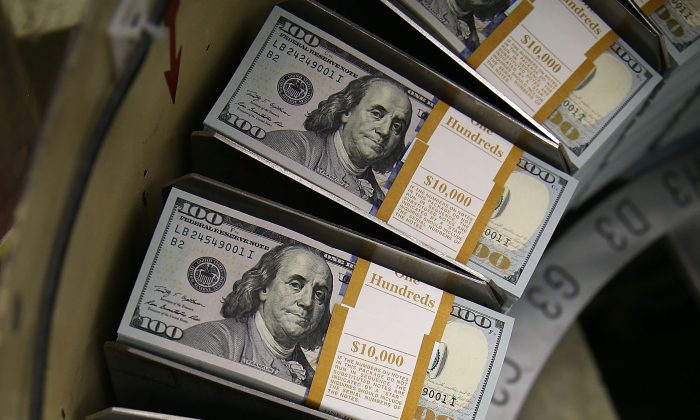 Newly redesigned $100 notes are printed at the Bureau of Engraving and Printing in Washington, D.C., on May 20, 2013. (Mark Wilson/Getty Images)
By John Haughey

There are at least 82 U.S. municipalities across 29 states now engaged in guaranteed income experiments, including more than 70 with pilot programs created within the past year, according to a coalition of more than 100 mayors promoting the concept.

Mayors for a Guaranteed Income and proponents among municipal officials nationwide are encouraging local governments to seed pilot programs with federal pandemic assistance from a $350 billion fund for state and local governments within the $1.9 trillion American Rescue Plan Act (ARPA), adopted in March 2021.

The mayoral group was established by Michael Tubbs, former mayor of Stockton, California, in June 2020 after the city began and later extended an experiment in which 125 residents received $500 monthly in a program financed by the Economic Security Project, a nonprofit that supports guaranteed income experiments.

In fact, much to the chagrin of conservatives and budget hawks, the ARPA state and local recovery fund is being used “as a seed for long-term policy change,” according to DePaul University’s Amanda Kass, who studies how states, cities, and counties spend federal pandemic assistance.

Kass told the panel that ARPA is the first federal program “that has ever produced this amount of highly flexible aid to nearly all governments in the United States—to tens of thousands of governments.”

As a result, she said, because of “the unprecedented nature” of the 2020 COVID-19 outbreak and its accompanying slate of federal pandemic-related bills, local governments are spending ARPA money in innovative ways, which makes evaluating how they spent or plan to spend that money “a tricky question.”

Kass said in analyzing how local governments are dispersing ARPA allocations, there’s “not just one avenue” but “many different stories” in how cities and counties “with unique socio-economic conditions” are using the money to address “unique needs.”

Baltimore is sponsoring a guaranteed income pilot program in which 200 “18- to 24-year-olds who have children” receive $1,000 per month in supplemental income for two years, according to the city’s Chief Recovery Officer Shamiah Kerney.

The city hopes to collect enough data to determine if providing a guaranteed basic income for low-income families with children benefits recipients and taxpayers, she said.

“We’re hoping that will inform the dialogue on a national basis,” Kerney said during the roundtable, cohosted by the National League of Cities and the Pandemic Response Accountability Committee (PRAC), a watchdog panel created by the U.S. Office of Inspector General (OIG) to monitor federal pandemic allocations.

The Baltimore Young Families Success Fund has earmarked $4.8 million in ARPA money for the program. It began dispersing $1,000 per month to 200 recipients with incomes at or below 300 percent of the federal poverty level—$26,200 for a family of four—in August.

By fall 2024, according to Kerney, the city suspects data collected from the pilot program will “demonstrate the need” for sustaining, if not expanding, the program.

In Cook County, Illinois, which includes Chicago, the board of supervisors in September approved the nation’s largest guaranteed income pilot program, a $42 million plan mostly using ARPA money to provide $500 monthly to 3,250 households at or below the federal poverty line for two years.

Cook County Budget Director Annette Guzman said officials are looking at the program to determine if it should be “a permanent piece” in addressing poverty “going forward.”

The pilot program fits under the city’s “economic justice action plan,” she said, which dovetails with U.S. Treasury ARPA guidelines that “encourage” funding for programs that address “racial and economic inequities” predating, but aggravated by, the pandemic.

Under U.S. Treasury guidelines attached to ARPA state and local allocations “investments to support people or communities with low incomes are allowable” even if initial ARPA outlays “may require investments for an extended period to be successful.”

According to PRAC, a team of 21 OIG inspectors general who monitor the disbursement of $5.7 trillion in federal aid approved between March 2020 and March 2021—beginning with the $2.2 trillion Coronavirus Aid, Relief, and Economic Security (CARES) Act and concluding with ARPA—there’s still plenty of pandemic assistance money available to municipalities.

As of Dec. 15, PRAC’s dashboard documents that $127.6 billion of ARPA’s State and Local Fiscal Recovery Fund had been “obligated” with $93 billion spent.

The most common use of ARPA money identified by PRAC is “revenue replacement,” which more than 24,000 local governments accessed to compensate for revenue declines fostered by the pandemic necessary to stabilize budgets.

But PRAC has documented that much of the $127.6 billion has been “obligated” to a wide variety of programs related to public health, infrastructure, administration, and “premium pay” with more than 6,800 allocations to address “negative economic impacts” aggravated by the pandemic.

According to PRAC, as of Dec, 15, more than $477 million in state and local ARPA money has been spent on cash assistance to 26 million Americans through existing programs, such as Temporary Assistance to Needy Families (TANF), Housing and Urban Development (HUD), and Community Development Service Block Grants (CDBG), as well as through the growing number of pilot guaranteed income programs proposed by Mayors for a Guaranteed Income.

Guaranteed income pilot programs will increasingly be part of that mix, Cook County’s Guzman said, calling ARPA “an unprecedented opportunity” for local governments “to go to a completely different level” in addressing “historical inequities with transformative programs that would help people recover from the pandemic.”