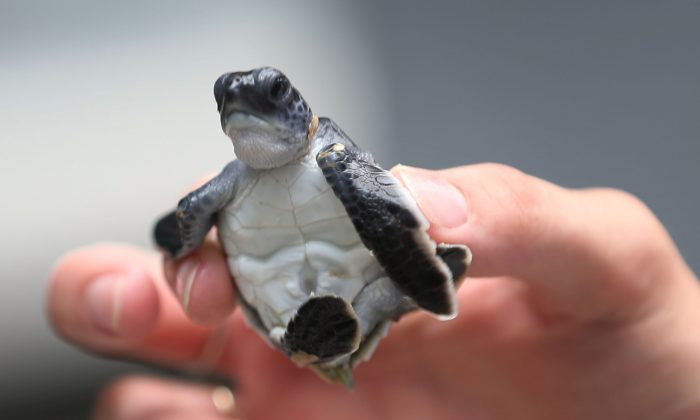 A green turtle is held as marine turtle specialists prepare to release the more than 570 baby sea turtles, including the Loggerhead and Green turtles, into the Atlantic Ocean on July 27, 2015 in Boca Raton, Florida. (Joe Raedle/Getty Images)
Environment

A sharp drop in the temperature of the water off the coast of North Carolina sent hundreds of sea turtles into a state of shock, requiring them to be rescued, reports WCTI Channel 12.

The temperature in the waters dropped from the usual 70s to the 50s, sending the turtles into a “cold-stunned” state, where they stop swimming and just float with the current. Some are eaten by predators, others die, and the luckier ones are simply washed ashore.

More than 600 turtles have been rescued in the past two weeks, with nearly 100 being treated at the North Carolina Aquarium at Pine Knoll Shores, among them green turtles and loggerheads.

The turtles are kept in a warm pool of water where they recover, with the goal of releasing them back as soon as possible. Michele Lamping, an employee at the North Carolina Aquarium, said that many of the turtles were very young, between 2 and 5 years old (turtles can often live up to hundreds of years).

“We want to get as many back out there, have them continue their life into adulthood, and reproduce just like other turtles,” Lamping told WCTI.

200 turtles were planned to have been released Friday near the Georgia-Florida border, further to the South of North Korea, Aquarium spokeswoman Claire Aubel told CNN Wire.