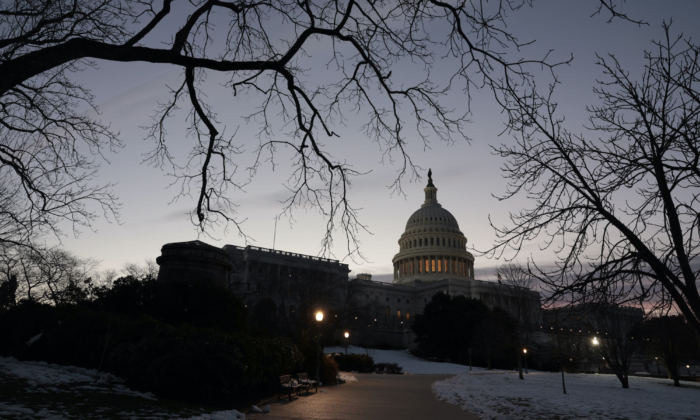 A view of the U.S. Capitol on the west front January 06, 2022 in Washington, DC. (Anna Moneymaker/Getty Images)
US Features

More Than $6.4 Billion in US Pandemic Aid Sent Abroad, Including China

Some 2,000 foreign contractors and nonprofits in 177 countries received more than $6.4 billion in United States’ federal pandemic response assistance between the spring of 2020 and the fall of 2021, according to a report by the U.S. Office of Inspector General’s (OIG) Pandemic Response Accountability Committee (PRAC).

Most of the “prime recipients” are based in the United States and distributed the funds overseas. The $6.4 billion in foreign payments came from two pandemic relief packages passed by Congress in March 2020 and March 2021 totaling $4.1 trillion.

Those prime recipients include federal agencies, including the departments of Defense, Homeland Security and Health & Human Services, the U.S. Agency for International Development (USAID), and nonprofits, such as North Carolina-based Family Health International and Boston-based JSI Research & Training Institute.

Collectively between spring 2020 and Sept. 30, 2021, these federal agencies and nonprofits have approved more than 4,000 contracts and issued 1,000 grants from pandemic relief funds to “sub-recipients” across the globe, including foreign contractors that provide services for the U.S. government and international development and health care organizations.

The largest single international prime recipient is the United Nations, which received $831.4 million in direct pandemic funding, according to the report.

The United Nations, the Global Fund to Fight AIDS, Tuberculosis and Malaria, and the U.N.’s High Commissioner for Refugees received 43 percent of U.S. pandemic relief funding spent overseas, according to the report.

About $2.132 billion of the $6.4 billion in internationally distributed U.S. pandemic relief funds was deposited and distributed through banks in Switzerland because many international nonprofits and organizations are headquartered in Geneva.

The recipient mix varies from nation to nation. For instance, sub-recipients in Kuwait received the second-highest allocation by nation after Switzerland, $411 million, with most providing services for U.S. information technology and defense contractors, such as Colorado-based Vectrus Systems Corp., which distributed $339 million in pandemic relief funds on contractors and organizations in Kuwait.

The pandemic relief funds that went to non-domestic recipients are in addition, or supplementary, to existing U.S. foreign aid programs, which totaled $51 billion in aid obligations to 11,000 recipients across the globe in 2020.

In 2021, while pandemic relief funds were distributed through USAID, its direct allocation actually declined to $36 billion, which was committed to 8,000 “activities” in 181 countries.

Since spring 2020, USAID maintains it has supported “more than 120 countries in their fight to contain and combat the virus” by providing $5.7 billion for vaccinations, including $700 million to strengthen vaccination programs and to purchase 1 billion Pfizer vaccines for distributions around the world.

During fiscal year 2022, USAID reports it had $4.7 billion “obligated”—$502 million in contracts, $4.2 million in grants—and dispersed $3.1 billion in 781 pandemic relief awards to 287 recipients, including many in Africa.

Phone calls and emails left with officials listed as USAID media contacts did not to elicit a response over a two-week period.

PRAC was created within the OIG’s independent Council of the Inspectors General on Integrity & Efficiency (CIGIE) in spring 2020 to track the $2.2 trillion in CARES Act allocations to state and local governments, nonprofits, contractors, and individuals.

With the subsequent adoption of additional federal COVID-19 relief and stimulus packages, including the March 2021 American Rescue Plan Act, PRAC’s 22 inspector generals are now tracking more than $5 trillion in federal pandemic allocations and documenting what is reported by “prime recipients” on its webpage that is accessible to the public on the committee’s website.

But accessibility and transparency doesn’t always translate into comprehensive accounting; there are 21 million “rows” of data on one of PRAC’s dashboards.

OpenTheBooks.com founder Adam Andrzejewski told Epoch Times that while doing a “deep dive” August analysis of the $282.6 billion the U.S. distributed in foreign aid between 2013-18, researchers found discrepancies between the numbers posted by PRAC, USAID, the Department of Treasury, the Congressional Budget Office, the Office of Management and Budget, and the Congressional Research Service.

Many of the discrepancies across the varied tracking and oversight programs are related to specific agency reporting requirements, the type of recipients they deal with, and can mix in assorted federal allocations from different times and programs that are not related to the COVID-19 response.

The bottom line, Andrzejewski said, is it can be daunting to find the bottom line when there are nearly as many haystacks as needles.

“It takes hard work” to ferret through and comprehend the data, he said. “They don’t make it easy.”

According to the Treasury, in 2020 Congress appropriated $3.8 billion for international COVID-19 relief efforts and by April 2021, had added another $10.8 billion in COVID-19 foreign-aid funding, totaling $14.6 billion.

OpenTheBooks maintains the $6.4 billion figure cited by PRAC, and even the $14,6 billion cited by Treasury, does not include all foreign-related COVID-19 spending, such as allocations for the U.S. Health & Human Services global vaccine program, the $9.6 billion in “total COVID-19 budgetary resources” earmarked for USAID, or the American subsidiaries of foreign companies,

According to OpenTheBooks.com, that includes 125 Chinese firms—with “strong ties to the Communist Chinese Party (CCP)”—that received forgivable loans from the $660 billion Paycheck Protection Program (PPP) in 2020, which is also not included in the foreign aid outlays.

PRAC’s Award Details Report lists 27 allocations totaling $14.539 million in pandemic assistance on its webpage to contractors in China through U.S.-based organizations and businesses with the largest —$5.18 million—allocated by DHS to U.S. Tactical Supply, Inc., based in Post Falls, Idaho.

According to USASpending, the May 18, 2020 allocation was for U.S. Tactical Supply’s procurement of 5.396 million face masks made in China.

FHI of Durham, N.C., distributed $99.945 million and the JSI Research & Training Institute, based in Boston, dispersed $64.32 million to contractors and organizations overseas.

Both are public health management consulting and research organizations that provide technical and managerial assistance to public health programs worldwide in tandem with contributions from the International Monetary Fund (IMF), the European Union, European Investment Bank, and corporate donors.

FHI fields a staff of 4,000 across the U.S. and in more than 60 countries. JSI Research & Training Institute, a nonprofit subsidiary of John Snow International, has 135 staff members engaged in 75 projects in 40 countries, seven technical core competency centers and corporate services teams.

Officials at JSI did not respond to repeated emails and phone calls. An FHI representative who requested not to be cited for attribution explained COVID-19 assistance was “channeled” by U.S.-based nonprofits to international groups and contractors using existing “contracting vehicles” and “funding mechanisms” established through the Epidemic Control (EpiC) project funded by the Emergency Plan for AIDS Relief (PEPFAR).

“When COVID hit, (the federal government) used a lot of nonprofits” like FHI and JSI because “they were experienced and they had the pipelines in place” to support COVID-19 response in countries “where we’re already working,” she said, providing a fact sheet outlining how FHI allocated pandemic relief money by modifying EpiC in early 2020 to respond to COVID-19 and to bolster health systems to address the pandemic.