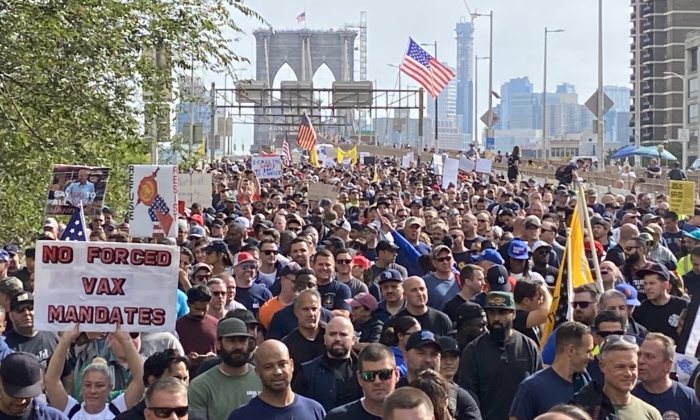 One in six workers employed by the city of New York declined to get a COVID-19 vaccine ahead of an Oct. 29 deadline to show proof of vaccination, the city stated on Oct. 30.

The vaccination rate among municipal workers jumped to 83 percent on Oct. 29 from 76 percent on Oct. 28, as thousands of police officers, firefighters, garbage collectors, and other city workers received the vaccine before the 8 p.m. deadline.

New York now braces for the fallout of running emergency and essential services without one in six workers across the board and the prospect of closed firehouses, fewer police and ambulances, and mounting trash.

The New York Police Department saw 16 percent of its personnel decline to comply, down from 21 percent on the day before the deadline.

The fire department said it was prepared to close up to 20 percent of its fire companies and have 20 percent fewer ambulances in service, while also changing schedules, canceling vacations, and turning to outside EMS providers to make up for expected staffing shortages.

Mayor Bill de Blasio said the sanitation department will move to 12-hour shifts, as opposed to its usual 8-hour shifts, and it will begin working on Sundays to ensure that trash doesn’t pile up.

Infections, hospitalizations, and deaths linked to the CCP (Chinese Communist Party) virus, the pathogen that causes COVID-19, have risen among people who have received a COVID-19 vaccine in recent months, according to newly released data from the Centers for Disease Control and Prevention. But the bulk of cases, hospitalizations, and deaths have remained among unvaccinated Americans, the data show.

De Blasio said on Oct. 28 that it’s “human reality” that more workers will get the vaccine rather than lose pay.

“We expected that a lot of the vaccinations would happen toward the end of the deadline. We also know a lot of people make the decision once they really realize that they’re not going to get paid,” he said.

Zachary Stieber, Tom Ozimek, and the Associated Press contributed to this report.