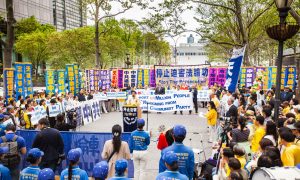 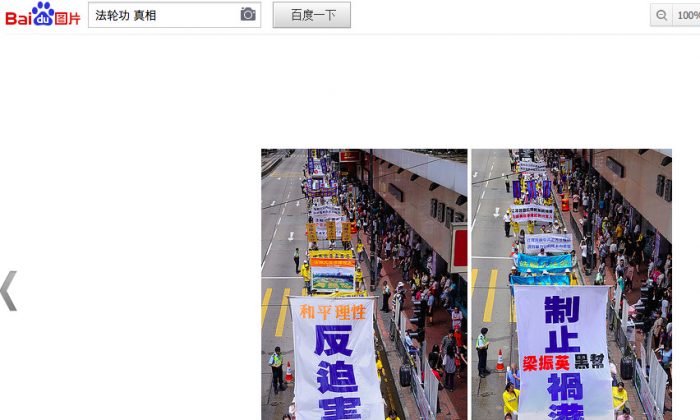 Recently on the Chinese search engine Baidu, a search for the term "Truth about Falun Gong," usually a highly censored term, displayed images of Falun Gong practitioners marching. The banners say "Peacefully and rationally oppose the persecution," on the left, and "Stop the CY Leung gang from ruining Hong Kong," on the right, in reference to the chief executive of Hong Kong. (Screenshot/Baidu.com)
China

Images on 'quitting the Party' and Falun Gong all searchable, at least for now
By Guo Hui

The Internet censorship apparatus run by the Chinese authorities is notoriously strict—so when there are enormous lapses in what it blocks, especially on the main search engine in China, Baidu, people take notice.

On Sept. 2, Baidu was allowing searches on “quitting the Party,” “the truth on Falun Gong,” “Falun Dafa is good,” and a range of similar terms.

The Tuidang movement is highly politically sensitive in China, and there are cases of people who have gone to prison or been sentenced to labor camps for encouraging other Chinese to renounce the Party, or passing around literature that advocates it.

Falun Gong, a traditional spiritual practice that has been persecuted since 1999, is also a tightly censored term in China.

It is unclear why, of a sudden, these two terms and others like them, can be searched on Baidu and return images that are normally verboten—usually in the form of Falun Gong prisoners protesting, holding banners, and the like.

If past cases are anything to judge by, the forbidden content will probably only be online for a day or two.

Recently, Baidu allowed similar searches for the phrase “Justice for Jiang,” referring to calls by Falun Gong practitioners to bring Jiang Zemin, the former head of the Chinese Communist Party, to trial for his role in initiating the persecution of the practice.

Several days later, the only images that were returned in a search for that phrase had nothing to do with Falun Gong.

In previous cases, sensitive political terms have been temporarily searchable when there is political contention at the highest levels of the Communist Party.

Before the early 2012 purge of Bo Xilai, the former Politburo member and mayor of the southwestern megacity of Chongqing, searches were allowed that returned results implicating his right-hand-man, Wang Lijun, in the mass organ harvesting of Falun Gong practitioners. Those searchers were later blocked. Political analysts at the time thought it likely that the unblocking was a deliberate form of political messaging.

Rumors that Jiang Zemin, the former Party chief, is now in some way being targeted by Xi Jinping’s anti-corruption campaign, or political purge, have spread across the Chinese-language world recently. A Chinese newspaper recently appeared to mock Jiang with a large photograph of a toad—which Jiang is often associated with—hooked up to a series of intravenous drips, as though on his last leg.