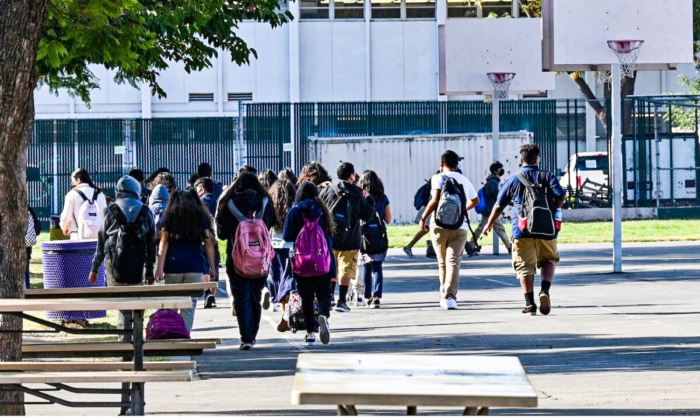 Students walk to their classrooms at a public middle school in Los Angeles on Sept. 10, 2021. (Robyn Beck/AFP via Getty Images)
Social Issues

They started in colleges, but trans closets—rooms stocked with transgender clothes and accessories for students to change into after arriving at school and back out of before going home—are being discovered in public schools, with some indication that they’re being kept secret from parents.

In a recent TikTok video, a California teacher implies that the trans closet he started at the high school where he works is meant to be kept from parents.

“The goal of the transition closet is for our students to wear the clothes that their parents approve of, come to school, and then swap out into the clothes that fit who they truly are,” the teacher said.

The California Family Council and others eventually confirmed the identity of the teacher as Oakland Unified School District Spanish teacher Thomas Martin-Edwards, who’s also the founder of “Queer Teacher Fellowship.”

Martin-Edwards, the teacher who runs the trans closet, is also transgender. He has posted videos of himself in the classroom showing off the stilettos he wears to school.

Neither Martin-Edwards, a former assistant principal in another school district, nor the school responded to inquiries by The Epoch Times about the trans closet.

“This is [an] example of the deceit schools are deliberately using to carry out a growing transgender movement in public schools behind the backs of parents,” California Family Council, a Christian conservative group, wrote on its website. “In addition to gender ideology madness, this school is teaching children that it is acceptable to defy their parents.”

California Family Council first discovered the trans closet through a Facebook posting by a nonprofit group that calls itself “The Transition Closet.”

On its Facebook page, The Transition Closet stated that it’s working with one of the district’s high schools to create a trans closet, posting, “We are extremely excited to begin our journey in working with Fremont High School of Oakland, California, along with our favorite teacher of TikTok/@justaqueerteacher.”

Amare Roush, founder of The Transition Closet, told The Epoch Times that her organization does support keeping the existence of trans closets at schools secret from parents, because of the abuse she says children often face at home if they disclose to their parents that they’re transgender.

“We do provide a safe space for kids whose parents are not accepting, because it’s known to help lower the suicide rate,” said Roush, who’s also a certified advocate for domestic violence victims. “These kids are going to do it anyway; we just want a way to provide them with a way to do it safely to where they’re not wearing clothes that are too small for them or doing so in a way that’s going to get them hurt by their parents.”

Roush emphasized that school was the best venue to provide trans kids with trans clothing.

Another trans closet, operated out of the Denver Conservatory Green Middle School in Colorado, was also the subject of recent posts on social media. A Twitter post about it ignited a flurry of messages slamming the school for encouraging transgenderism among students as young as 12 years old.

“This is grooming,” one Colorado man wrote on Twitter. “Police should come to the classroom and arrest whoever the teacher is in this classroom.”

The Denver school also didn’t respond to inquiries from The Epoch Times.

The original post about the Denver trans closet was made by “Buy Nothing Central Park” and refers to the closet for transgender students as being started at “our school.” It also asks for clothing for the trans closet to be dropped off at the school.

Megan Fox, a freelance columnist for PJ Media and co-host of the weekly YouTube show “Weekly Family Court Corruption Update,” recently raised $1,650 through GoFundMe.com to pay for documents relating to the trans closet at a Colorado school.

Fox recently wrote in her column that the school told her that she had to pay $1,650 to obtain the documents, which she requested via the Freedom of Information Act. According to Fox, the school said the bill was based on 55 hours of staff time at $30 per hour to fulfill her request.

On its website, The Transition Closet stated that “the near future holds transition closet[s] and services throughout the school district for students of the Trans/Nonbinary/Intersex and additional LGBTQIA+ community members.”

Roush said her organization is working with other schools in the United States to start trans closets and that her organization currently runs them at churches of several denominations, including Lutheran, Episcopalian, and Methodist.

For the California school trans closet, the Arizona-based group also includes contact information linked to the website ValidByBrodie.com, which includes a “start your own closet” section for students, teachers, and school administrators.

It has also adopted the slogan “when [you’re] ready to come out of the closet, step into ours” and has an online shop that includes a variety of transgender accessories. It also sells transgender workbooks for teens and runs online name change clinics.

Roush emphasized that transgender accessories are never supplied to minors without a parent’s permission.

She said transgender kids can end up physically hurting themselves by using duct tape instead of transgender accessories to hide their genitals.

“Nobody would ask for this; we are just trying to ease the transition of kids that are dealing with this,”‘ she said.

Her group also works with colleges to establish transition closets.

Correction: a previous version of this article stated the incorect location for ValidByBrodie. The Epoch Times regrets the error.