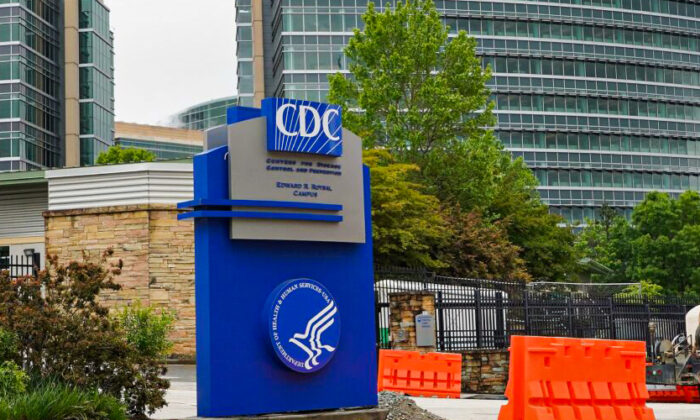 A general view of the Centers for Disease Control and Prevention headquarters in Atlanta, Ga., on April 23, 2020. (Tami Chappell/AFP via Getty Images)
Vaccines & Safety

Young males suffered heart inflammation at higher rates following a booster dose of Pfizer’s COVID-19 vaccine, according to newly released data from the Centers for Disease Control and Prevention (CDC).

Males aged 16 or 17 had about 139 cases of myocarditis, a form of heart inflammation, per million second doses administered, according to the data, which was drawn from the Vaccine Safety Datalink (VSD), a CDC monitoring system.

But that same group had 200 cases of myocarditis per million booster doses administered, according to the data, which was from between Dec. 14, 2020, and May 28, 2022. Over 2 million total Pfizer-BioNTech primary series were administered in children, and about 230,000 booster doses, in the time period studied.

Males aged 30 to 39 also had a higher rate of heart inflammation following a Pfizer booster than the second dose, as did females aged 16 and 17.

Both the Pfizer and Moderna vaccines are built on messenger RNA technology and both are administered in two-dose primary series, with the doses spaced several weeks to several months apart.

The new data is the first time a federal monitoring system has captured a higher rate of myocarditis following a booster dose, but some studies have previously indicated that young men were more at risk from a booster than the second dose.

Neither myocarditis or a related condition, pericarditis, were detected in clinical trials of the Pfizer or Moderna vaccines. As the shots were administered following authorization, reports of the conditions triggered medical chart examinations and other investigations, which has led to the conclusion that the vaccines are linked to the conditions.

Moderna’s vaccine is not yet available to children.

The new data was presented to the Food and Drug Administration’s vaccine advisory panel, which was being asked whether Moderna’s shot should be available for children.

The data was presented by Dr. Tom Shimabukuro, a CDC vaccine safety researcher.

VSD is a collaborative system run by the CDC and nine health care organizations, including Kaiser Permanente Southern California and the Marshfield Clinic Research Institute in Wisconsin.

According to the data from the system, not every group was more at risk following a booster.

Data from another system, the Vaccine Adverse Event Reporting System (VAERS), indicated a rate of 75.9 myocarditis cases per million second doses in 16- and 17-year-old males, and 46.4 cases per million second doses in males aged 12 to 15. There were also higher than expected rates after Pfizer and Moderna vaccination in males as old as 49 and females aged 12 to 29.

According to the VAERS data, the rates after a booster were lower than the second dose for all age groups across both males and females.

After 90 days, about four in five patients had fully or probably fully recovered, according to surveys the CDC conducted of health care providers. The agency plans to follow up with patients who had not recovered to assess their status at 12-plus months following their issue.

Unlike some other countries, U.S. officials have not paused administration of either the Pfizer or Moderna vaccines despite the growing data on heart inflammation. Officials were asking the advisory panel on Tuesday whether Moderna’s vaccine should be available to children aged 6 to 17, and on Wednesday whether both vaccines should be available to kids as young as 6 months old.