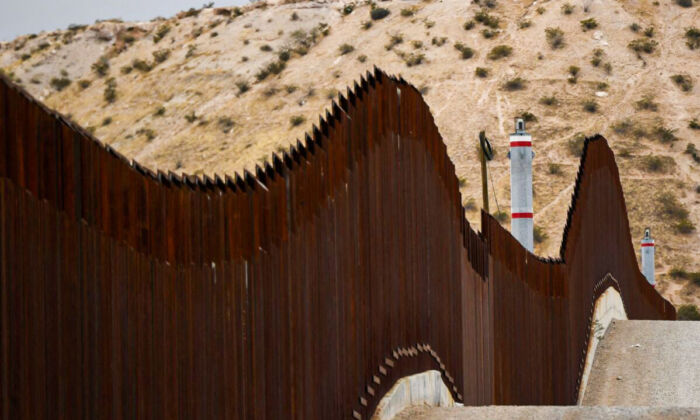 A US Border Patrol vehicle sits next to a border wall in the El Paso Sector along the U.S.-Mexico border between New Mexico and Chihuahua state, in Sunland Park, New Mexico, on Dec. 9, 2021. (Patrick T. Fallon/AFP via Getty Images)
Democrats

A dozen Democrats have urged for a comprehensive plan to address the expected influx of migrants at the southern border before the Biden administration ends Title 42 expulsions.

The White House said on April 20 it’s “planning and preparing for the end” of the Trump-era public health order, which was implemented amid the COVID-19 pandemic in March 2020 and has since been rejecting asylum-seekers at U.S. borders.

The ongoing migrant expulsions policy is set to expire on May 23 under the Biden administration, as press secretary Jennifer Psaki said current funding levels will not meet the needs of law enforcement agencies once Title 42 is lifted.

The move sparked outrage among Republicans and a growing list of Democrats, including those in tough races for November midterms seeking reelections or other positions, are breaking up with Biden on the reversal.

Golden, who is seeking reelection, said Biden’s move could “create crisis conditions that would be dangerous for both migrants coming to America and Americans themselves.”

The Department of Homeland Security reported a record of more than 221,000 encounters at the southwest border in March alone, with arrest numbers reaching the highest in two decades.

Rep. Susie Lee (D-Nev.), running in the June primary in Nevada’s 3rd Congressional District, also spoke out against Biden’s termination announcement. She told Fox News a plan must be in place “to handle a surge in migration at the border in a humane, safe and orderly way.”

“By lifting Title 42 without the necessary staffing and resources, the administration will only exacerbate the tensions that, for decades, have stalled progress on reforming our broken immigration system.”

Facing a tough road ahead in the 2022 election cycle, Rep. Sharice Davids (D-Kan.) said she’s concerned that the administration “is moving too quickly” on the reversal without a “comprehensive plan.”

Luria, running in Virginia’s 2nd Congressional District, accused the Biden administration of being unprepared, calling for proper “tools and resources” to be provided to border officers before Title 42 is lifted.

According to a spokesman from his office, Bennet believes the administration “has failed to articulate a plausible plan” as the southern border has already experienced a humanitarian crisis.

Although not being on the ballot this year, Rep. Stephanie Murphy (D-Fla.) also pushed back against a repeal of the policy.

“Public health and public safety, not politics, should drive the federal government’s decision on when to end Title 42,” the congresswoman said in an earlier statement.

Sen. Jon Tester (D-Mont.) wrote in an April letter to Homeland Security Secretary Alejandro Mayorkas, warning that the move will “not only affect the southern border but put more strain on those working to secure the northern border as well.”

Rep. Val Demings (D-Fla.), who vocally defended the removal of Title 42 earlier this month, now says she does not support the move, according to a spokesperson.