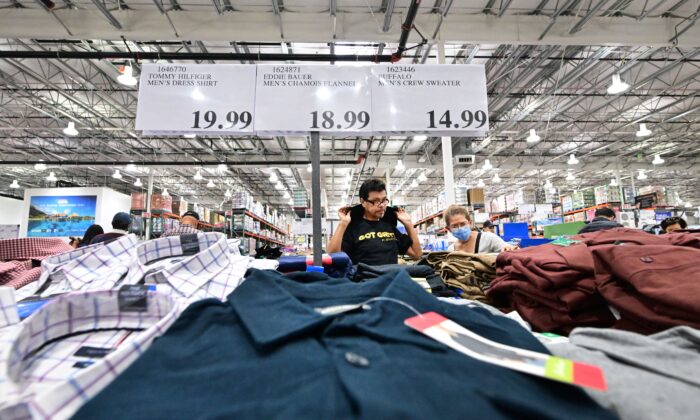 People shop for clothing at a Costco store in Monterey Park, Calif., on Nov. 22, 2022. (Frederic J. Brown/AFP via Getty Images)
By Naveen Athrappully

This year’s holiday sales might see Small Business Saturday emerge as the most attractive day for shopping among American consumers, according to a latest survey by Bankrate.

However, it is lower than the 66 percent who have planned their shopping for Cyber Monday. “There is always a lot of enthusiasm around Small Business Saturday,” said Ted Rossman, Bankrate senior industry analyst, according to the survey.

“There’s a strong desire to support local businesses that are important parts of our local communities.”

Millennials, at 69 percent, were found to be the top demographic who intend to spend their money at local retailers on Small Business Saturday. They were followed closely by Gen Zers at 65 percent, GenXers at 61 percent, and Baby Boomers at 49 percent.

Eighty percent of respondents who plan on shopping this holiday season intend to do so on Black Friday, Small Business Saturday, or Cyber Monday.

While 65 percent of survey respondents plan on making purchases from small businesses, 78 percent intend to do so from a large business. In addition, 74 percent of respondents are looking forward to shopping online as against the 67 percent who want to shop in person.

In the survey, 95 percent of respondents said that small businesses have at least one advantage over larger firms, with 51 percent liking their unique gift ideas, 48 percent their better customer service, and 39 percent appreciating the fostering of a sense of community.

American shoppers have so far given no indication that they are in any hurry to spend money. In an interview with CNBC, Best Buy CEO Corie Barry said that the firm’s sales in October were the slowest in the quarter when compared to 2021.

Last year, many shoppers made early purchases as they were worried they might not get the product on their wish list. That desire to buy “just isn’t there” in 2022, she said.