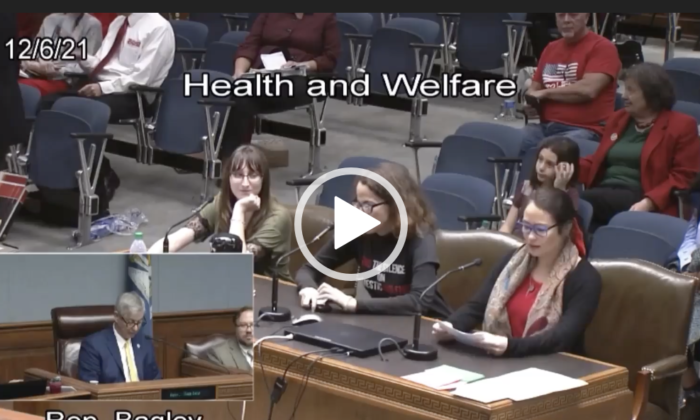 Joseph Mercola: Do More Children Die From the COVID Shot Than From COVID?

According to published research, children are at risk for potentially lifelong health effects from the jab. Read here to learn what the experts say.

The video above features Collette Martin, a practicing nurse who testified before a Louisiana Health and Welfare Committee hearing Dec. 6, 2021. Martin claims she and her colleagues have witnessed “terrifying” reactions to the COVID shots among children—including blood clots, heart attacks, encephalopathy and arrhythmias—yet their concerns are simply dismissed.

Among elderly patients, she’s noticed an uptick in falls and acute onset of confusion “without any known ideology.” Coworkers are also experiencing side effects, such as vision and cardiovascular problems.

Martin points out that few doctors or nurses are aware the U.S. Vaccine Adverse Events Reporting System (VAERS) even exists, so injury reports are not being filed. Hospitals also are not gathering data on COVID jab injuries in any other ways, so there’s no data to investigate even if you wanted to. According to Martin:

“We are not just seeing severe acute [short term] reactions with this vaccine, but we have zero idea what any long-term reactions are. Cancers, autoimmune [disorders], infertility. We just don’t know.

We are potentially sacrificing our children for fear of MAYBE dying, getting sick of a virus — a virus with a 99% survival rate. As of now, we have more children that died from the COVID vaccine than COVID itself.

And then, for the Health Department to come out and say the new variant [Omicron] has all the side effects of the vaccine reactions we’re currently seeing — it’s maddening, and I don’t understand why more people don’t see it. I think they do, but they fear speaking out and, even worse, being fired … Which side of history will you be on? I have to know that this madness will stop.”

What the VAERS Data Tell Us About COVID Jab Risks

I recently interviewed Jessica Rose, Ph.D., a research fellow at the Institute for Pure and Applied Knowledge in Israel, about what the VAERS data tell us about the COVID jabs’ risks. As noted by Rose, the average number of adverse event reports following vaccination for the past 10 years has been about 39,000 annually, with an average of 155 deaths. That’s for all available vaccines combined.

The COVID jabs alone now account for 983,756 adverse event reports as of Dec. 17, 2021, including 20,622 deaths—and this doesn’t include the underreporting factor, which we know is significant and likely ranges from five to 40 times higher than reported. Most doctors and nurses don’t even know what VAERS is and even if they do, they chose not to report the incidents.

In the case of the COVID jabs, 50 percent of the deaths occur within 48 hours of injection. It’s simply not conceivable that 10,000 people died two days after their shot from something other than the shot. It cannot all be coincidence. Especially since so many of them are younger, with no underlying lethal conditions that threaten to take them out on any given day. A full 80 percent have died within one week of their jab, which is still incredibly close in terms of temporality.

Aside from the immediate risk of death, children are also at risk for potentially lifelong health problems from the jab. Myocarditis (heart inflammation) has emerged as one of the most common problems, especially among boys and young men.

In early September 2021, Tracy Beth Hoeg and colleagues posted an analysis of VAERS data on the preprint server medRxiv, showing that more than 86 percent of the children aged 12 to 17 who report symptoms of myocarditis were severe enough to require hospitalization.

No doubt, doctors are seeing an increase in myocarditis, but few are willing to talk about it. In a recent Substack post, Steve Kirsch writes:

“I just read a comment on my private ‘healthcare providers only’ substack. An estimated 100X elevation in rate of myocarditis, but nobody will learn of it since cardiologists aren’t going to speak out for fear of retribution.

His comment was a private conversation he had with a pediatric cardiologist. The cardiologist is never going to say this in public, to the press, or have his name revealed since his first duty is to his family (keeping his job).

If a ‘fact checker’ called the cardiologist, he might either refuse to comment or say ‘I’m seeing somewhat more cases after the vaccine rolled out.’ Here’s the exact comment that was posted to the private substack:

‘Pre-jab, one or two cases per year of myocarditis. Now, half his waiting room. Tells parents they are ‘studying’ the causality. Refers them to infectious disease specialist for discussions on their other children.

Admits he and about 50% of his colleagues know what’s going on but are too terrified to speak out for fear of retaliation from hospitals and state licensing boards.

Other 50% don’t want to know, don’t care and/or are reveling in the cognitive dissonance (like Dr. Harvey [Cohen] at Stanford) and/or letting loose their authoritarian demon. Good luck with these former colleagues of mine. The stench is overpowering.’

Myocarditis Is Not a Mild, Inconsequential Side Effect

Together with Dr. Peter McCullough, in October 2021 Rose also submitted a paper on myocarditis cases in VAERS following the COVID jabs to the journal Current Problems in Cardiology. Everything was set for publication when, suddenly, the journal changed its mind and took it down.

You can still find the pre-proof on Rose’s website, though. The data clearly show that myocarditis is inversely correlated to age, so the risk gets higher the younger you are. The risk is also dose-dependent, with boys having a sixfold greater risk of myocarditis following the second dose.

While our health authorities are shrugging off this risk saying cases are “mild,” that’s a frightening lie. The damage to the heart is typically permanent.

As noted in a recent analysis by Dr. Robert Malone, (who recently got banned from Twitter but can be found on Substack), the risk-benefit ratio of the COVID shot is becoming even more inverted with the emergence of Omicron, as this variant produces far milder illness than previous variants, putting children at even lower risk of hospitalization or death from infection than they were before, and their risk was already negligible.

Malone is currently spearheading the second Physicians Declaration by the International Alliance of Physicians and Medical Scientists, which has been signed by more than 16,000 doctors and scientists, stating that “healthy children shall not be subjected to forced vaccination” as their clinical risk from SARS-CoV-2 infection is negligible and long term safety of the shots cannot be determined prior to such policies being enacted.

Not only are children at high risk for severe adverse events from the shots, but having healthy, unvaccinated children in the population is crucial to achieving herd immunity.

People who had received two doses of the mRNA jab more than doubled their five-year risk of acute coronary syndrome (ACS), the researchers found, driving it from an average of 11 percent to 25 percent. ACS is an umbrella term that includes not only heart attacks, but also a range of other conditions involving abruptly reduced blood flow to your heart. In a November 21, 2021, tweet, cardiologist Dr. Aseem Malhotra wrote:

“Extraordinary, disturbing, upsetting. We now have evidence of a plausible biological mechanism of how mRNA vaccine may be contributing to increased cardiac events. The abstract is published in the highest impact cardiology journal so we must take these findings very seriously.”

What Do the VAERS Data Show?

Research published in 2017 calculated the background rate of myocarditis in children and youth, showing it occurs at a rate of four cases per million per year. According to the U.S. Census Bureau, as of 2020 there were 73.1 million people under the age of 18 in the United States. That means the background rate for myocarditis in adolescents (18 and younger) would be about 292 cases per year.

As of December 17, 2021, looking only at U.S. reports and excluding the international ones, VAERS had received:

In total, that’s 1,475 cases of myocarditis in teens aged 18 and younger—five times the background rate. And again, this does not take into account the underreporting rate, which has been calculated to be anywhere from five to 40.

Meanwhile, the CDC claims that, between March 2020 and January 2021, “the risk for myocarditis was 0.146% among patients diagnosed with COVID-19,” compared to a background rate of 0.009 percent among patients who did not have a diagnosis of COVID-19.

After adjusting for “patient and hospital characteristics,” COVID-19 patients between the ages of 16 and 39 were on average seven times more likely to develop myocarditis than those without COVID.

That said, the CDC stressed that “Overall, myocarditis was uncommon” among all patients, COVID or not. What’s more, only 23.7 percent of myocarditis patients between the ages of 16 and 24 had a history of COVID-19, so a majority of the cases in that age group were not due to COVID.

Using that peak hospitalization rate of 2.1 per 100,000 (or 21 per million) in this age group, and assuming the risk for myocarditis is 0.146 percent among COVID-positive patients, we get a myocarditis-from-COVID rate among adolescents of 0.03 per million. That’s a far cry from the normal background rate of four cases per million, so the risk of getting myocarditis from SARS-CoV-2 infection is probably quite small.

Now, assuming the COVID hospitalization rate for adolescents is 21 per million, and we have 73.1 million adolescents, we could expect there to be 1,535 hospitalizations for COVID in this age group in a year. If 0.146 percent of those 1,535 teens develop myocarditis, we could expect 2.2 cases of myocarditis to occur in this age group each year, among those who come down with COVID.

In summary, based on CDC statistics, we could expect just over two teens to contract myocarditis from COVID-19 infection. Meanwhile, we have 1,475 cases reported following the COVID jab in just six months (shots for 12- to 17-year-olds were authorized July 30, 2021).

Taking into account underreporting, the real number could be anywhere between 7,375 and 59,000—again, in just six months! To estimate an annual rate, we’d have to double it, giving us anywhere from 14,750 to 118,000 cases of myocarditis. So, is it actually true that “For adolescents and young adults, the risk of myocarditis caused by COVID infection is much higher than after mRNA vaccination”? I doubt it.

Can You Lessen the Damaging Effects?

There is absolutely no medical rationale or justification for children and teens to get a COVID shot. It’s all risk and no gain. If for whatever reason your son or daughter has already received one or more jabs, and you hope to lessen their risk of cardiac and cardiovascular complications, there are a few basic strategies I would suggest implementing.

Keep in mind these suggestions DO NOT supersede or cancel out any medical advice they may receive from their pediatrician. These are really only recommendations for when there are no adverse symptoms. If your child experiences any symptoms of a cardiac or cardiovascular problem, seek immediate medical attention.