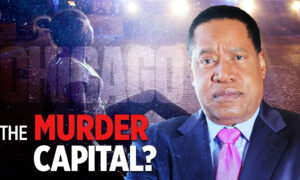 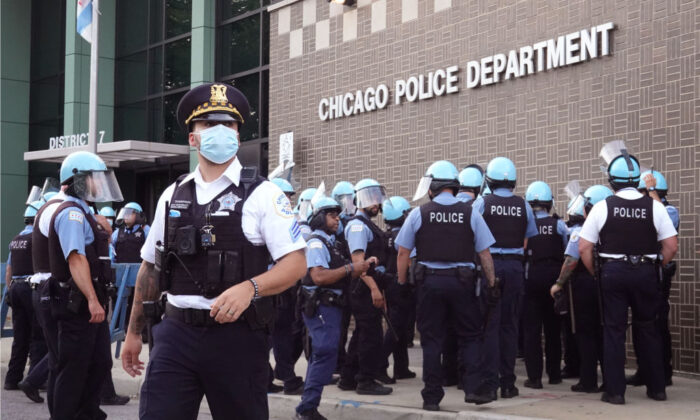 Chicago police stand guard as demonstrators protest outside the department's 7th District station in Chicago, Illinois, on Aug. 11, 2020. The protest was held in response to the August 9 shooting and wounding of a 20-year-old man who allegedly fired at officers in the Englewood neighborhood. The protest was met with resistance from a small group of Englewood residents. (Scott Olson/Getty Images)
Illinois

CHICAGO—Carrie Steiner’s mental health clinic in Lombard, a suburban town just west of Chicago, has seen a surge of police officers from Chicago Police Department and surrounding suburban police agencies. She added five new therapists in the last 18 months, each seeing 25 to 30 clients every week.

A new source of stress for Chicago police is the prolonged working hours, Steiner said. Since last summer, they have been repeatedly asked to work 12-hour shifts with no days off to cope with the civil unrest and rising crime. Many officers she knows sleep four to five hours a day—that is, if they get to fall asleep at all.

“If you are already an officer with anxiety or depression, then with sleep deprivation, you are not able to handle all the stresses. That just increases the chance of suicide,” Steiner told The Epoch Times.

Robin Kroll, a police psychologist, has just expanded the peer support programs at her clinic in northwest Chicago to cope with the influx.

“What we are seeing is a surge of exhaustion. Those who have always thought of themselves as ‘resilient’ are coming in and saying that they feel ‘broken’ and are in crisis,” Kroll said in an email to The Epoch Times.

Another source of stress is the increasing anti-police climate since the death of George Floyd last May, Kroll said. The incident has fueled a nationwide call to defund the police and enact more legal restrictions on policing.

In January, Illinois lawmakers passed a sweeping police reform bill that will allow anonymous complaints against police officers, open the door to civil penalties for officers for pattern and practice violations, and prohibit officers from arresting offenders for Class B and C misdemeanors.

“Taking a passive role as crime increases goes against everything an officer with integrity represents. This all leads to low morale and a loss of purpose,” Kroll told The Epoch Times in the email.

After the police reform bill, many officers told Steiner that they felt powerless in protecting victims of crime. Steiner advised them to focus on the positive things they can still do within their power, such as informing citizens how their safety is impacted by the new reform bill.

“If the citizens don’t like the law, let them know that they need to contact their lawmakers to change the law, so that police can have more rights to do what citizens want them to do,” Steiner said.

“It’s just another option for officers, especially for those who don’t feel comfortable seeking help from the department,” Mette told The Epoch Times. “One of the biggest roadblocks with officer wellness in our department is a lot of officers don’t feel like it’s confidential and they don’t trust the process.”

The Chicago Police Department’s (CPD) in-house division that provides mental health services, formerly known as the Professional Counselling Division, increased the number of its staff from 11 to 17 in 2019, and to 20 in 2021.

A recently retired Chicago police officer told The Epoch Times that he once went to the division for help with his marital problems. A few officers got news of his visit less than five minutes after his session ended. He declined to disclose his name for fear of repercussions.

“Officers don’t seek help because they know somebody might find out in a few minutes,” he said. “If their boss finds out, it might affect their ability to get promoted or go to a nice unit. Because when the boss finds out, he says, ‘What? This guy was what? Suicidal? I don’t need him here.’ There goes the opportunity.”

The CPD did not reply to a request for comment by the time of publication.

Mette said the union will not release any officers’ mental health records to CPD. The union is working with CPD to enact an official union position of Officer Wellness Ombudsman in the new contract with the city.

“With this new contract, it’s going to open the door a little bit more for the FOP and myself to have more input on how the department treats officer wellness and try to get them to take more steps forward,” Mette said. “The union and the department will work together to find the best route for each officer.”