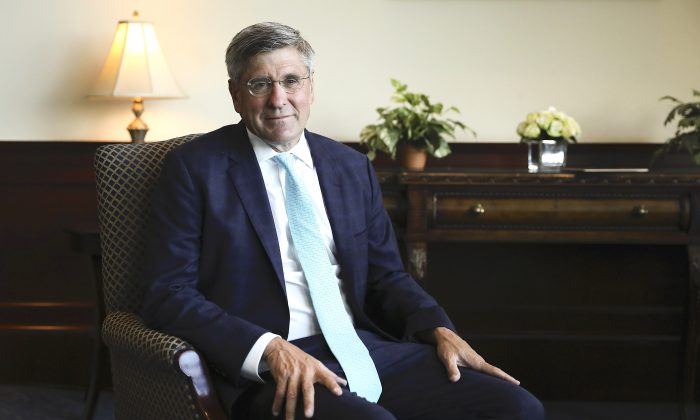 Stephen Moore, distinguished visiting fellow for Project for Economic Growth at The Heritage Foundation in Washington, on May 14, 2019. (Samira Bouaou/The Epoch Times)
Politics

Moore: Pandemic Relief Bill Should Include Tax Cuts for Businesses and Workers

Economist Stephen Moore on Dec. 27 said that tax cuts for business and workers should be part of the pandemic relief bill, which Congress is working to revise in order to meet President Donald Trump’s demands.

Congress passed the $900 billion pandemic relief measure last week as part of a $2.3 trillion spending bill that will fund the government through September next year. Trump derided the bill for wasteful spending and not providing enough via the stimulus checks to individual Americans. The president cited the $10 million allotted for gender programs in Pakistan as an example. He also called for $2,000 stimulus checks, instead of the $600 Congress approved days earlier.

Moore, an outside adviser to Trump, told 770 AM that tax cuts would fuel the economy hard hit by the lockdowns and other restrictions imposed by state and local governments with the stated goal of limiting the spread of the Chinese Communist Party (CCP) virus, commonly known as the coronavirus.

Moore, who Trump considered appointing to the Federal Reserve, criticized the length of the nearly 5,600-page bill, agreeing with lawmakers, including Rep. Alexandria Ocasio-Cortez (D-N.Y.), that lawmakers had no time to read the bill before voting on it.

“I agree with AOC, of all people, who said, ‘This is an outrage. We might not even be able to read the bill before we all have to vote on it,’” Moore said, adding the he hopes Trump would veto the measure.

“This bill should be cleaned of all the pork and the aid should go directly to individuals, not the lobbyists,” he said, adding that the $1.4 trillion government spending measure portion of the bill has “no pro-growth element.”

“Where are the tax cuts? Where is the de-regulation? Where are the things that will incentivize our businesses to get back up and running?” Moore said. “My New Year’s wish for 2021 is that we stop this shutdown of our economy and let businesses operate.”

Top Democrats backed Trump’s request to increase the stimulus check to $2,000 but ignored his demand to cut other spending items from the bill. An attempt to boost the check size to $2,000 on a unanimous consent vote failed last week.

Trump could bill the measure proactively or let it expire when Congress adjourns on Jan. 3. He could also pass it despite his criticism or approve a revised bill in case Congress approves one.