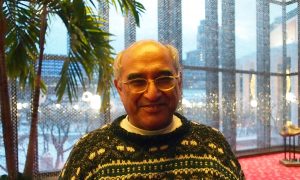 MONTREAL—The husband and wife team of Ezio Carosielli and Luisa Sassano own two of Montreal’s most prestigious theatres as well as two dance studios. On Jan. 10, they were given a special gift—the opportunity to see renowned Shen Yun Performing Arts in a performance of classical Chinese dance and music.

Their dancer daughters, accomplished in their own rights came with mom and dad. The family’s tickets to the performance at Place des Arts were bought by Ms. Sassano’s sister and brother-in-law. Mr. Carosielli couldn’t thank them enough.

“We will be eternally grateful,” said Mr. Carosielli. “We can’t wait to come back next year. It’s just thrilling to see. It was really, really impressive.”

Mr. Carosielli was the talk of the town when he bought the iconic Rialto Theatre in 2010.

He caught the show-business bug, and went on to purchase the equally iconic CIBC building. He converted it into the St. James Theatre, creating another cultural venue in a city that loves to celebrate.

He and his wife, Luisa Sassano, were both lawyers but gave up their practice in 2000 to manage their many real estate acquisitions, mainly malls and office spaces, according to a report by the Montreal Gazette. They also own a chain of 10 daycare centres, and two dance schools where their university-aged daughters teach and dance.


We can’t wait to come back next year. It’s just thrilling to see. It was really, really impressive.
— Ezio Carosielli

So too was his wife. Beyond her real estate work, Ms. Sassano is executive director of le Groupe Merveilles and manages both locations of Extravadanza Productions, dance studios offering instruction in ballet, jazz, tap, acro-dance, hip hop, musical theatre, modern dance, and more.

Ms. Sassano said she was moved by the performance.

“It was inspirational—inspirational. If our students could learn to dance as well as what we saw on stage today, I’m sure I would be pleased, and the parents who bring their children to our studio would be more than pleased. It was fantastic,” she said.

“The lines, the formation, it was clean, it was precise. It was just outstanding—outstanding.”

She pointed to the “The Fable of the Magic Brush” as one of the dances that especially made an impression.

“The blend of real dance and some form of animation coming out of the screen—it was just stupendous, I really enjoyed it.”

That animation comes from Shen Yun’s digitally projected backdrops. These vividly animated settings extend the range of the stage.

‘Great artistry, through and through’

Ms. Sassano has seen enough dance to know one of the fundamental characteristics of mastery: the easier it looks, the harder they’ve trained.

“They must be training every minute of the day, every day of the year,” she said.

“It’s just incredible because they make it look easy. Therefore it must be very hard and they must do a lot of training. … You can hear a feather drop, the flips [with] no use of arms, it’s incredible.”

“I was totally impressed, beautiful. Breathtaking,” she added.

She said the male dancers showed amazing strength and were always smiling or playing their characters in the story-based dances.

“Great actors. We really believed their story as they were performing. The story is believable from their faces,” she said.

The female dancers were beautiful, she said.

“Just gorgeous. Their physiques, as you can see that the training is impeccable and the fluidity and just the expression and the physical enthusiasm that comes out of their dancing is amazing.”

She described Shen Yun’s orchestra as a feat by itself, whose members are obviously talented.

Her daughter Cara Carosielli is multi-talented. One of the instructors of Extravadanza, she has been dancing for years and has also played the piano in recitals and performed the saxohphone and percussion as well.

It was Cara’s first time to see Shen Yun, an experience that moved her.

“It was very, very inspiring, especially from a cultural point of view,” she said.

“I’m used to classical ballet and jazz and tap and Broadway, and that kind of style. And to see something like this is very inspiring for me. It makes you think that there is so much more out there than just your little bubble, and what you’re used to all the time. It’s very interesting, very good experience,” she said.

You can see that the training is impeccable and the fluidity and just the expression and the physical enthusiasm that comes out of their dancing is amazing.
— Luisa Sassano

She noted some of the fine details and distinctive features of classical Chinese dance, like how the dancers walk heel-toe rather than the toe-heel of ballet. She also noted the precision of the choreography.

“Everybody needs to be together. It’s a very unified art form, and I found that to be very very interesting.”

“It’s so great to see that many people at the same time and doing the same thing. It’s just remarkable.”

She could not quite fathom the challenge of one dance, “Handkerchief Blossoms.” It is set in the heart of winter with a group of young ladies performing a northeastern folk dance spinning pink handkerchiefs on their fingertips.

“All their tumbling, and they would never drop their handkerchief. It was amazing.”

Another difference she noted was the acting element of classical Chinese dance. Shen Yun’s website explains that this type of acting is different from that of film, drama, opera, or Broadway musicals.

“The acting in classical Chinese dance involves coordinating facial expression with physical movement, which, when merged together, results in an amplified form of expression,” explains the website.

“You could see that story really come through in the dancers, in the theatrical movement in the face. It was very good.”

“I found that to be very interesting, because we don’t think about dance from that standpoint, so it was interesting to see that there is such a divine implication in the dancing.”

It was an experience she was eager to share. She said Shen Yun inspired her and could inspire her students as well. She said she would encourage them to come and see the show and the hard work and dedication behind a performance of that calibre.

“The visual effects were very interesting as well, with the backdrop, the screen, and how [the dancers] would come in and out,” she said.

Her sister and fellow dance instructor has competed in the United States and Canada in tap, jazz, and ballet events. She was also profuse in her praise.

“It was breathtaking, it was very precise, very fluid, very graceful. I was very impressed. The dancers are very strong,” said Andria Carosielli.

“Even if what they’re doing is really hard, they make it seem easy. They make everything seem very easy to do.”

“Anything can go wrong and they handled themselves very well, there were no mistakes, it was perfect. I was really impressed by that part,” she said. “It was very daring.”

“The costumes were so beautiful. Every number had different costumes. Very colourful, they were perfect.”

And like her sister, Andria would also heartily encourage other dancers to see the show.

“I suggest this performance to any dancer, anyone really who has an appreciation for any type of culture. It was a really good show.”

Reporting by NTD Television and Donna He

New York-based Shen Yun Performing Arts has four touring companies that perform around the world. The Shen Yun International Company will perform in Montreal until Sunday before continuing on to Quebec City. For more information, visit ShenYunPerformingArts.org