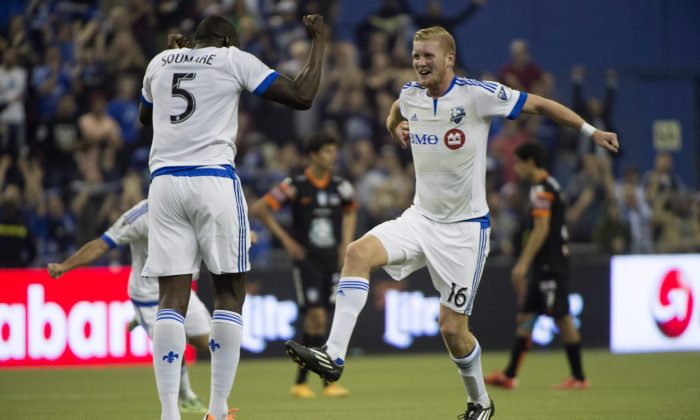 The Montreal Impact made history on Tuesday at Olympic Stadium with a dramatic equalizer from young American forward Cameron Porter in the 94th minute against Mexican team Pachuca.

In front of over 38,000 fans, the Impact got the 1–1 low-scoring draw they needed and booked a spot in the CONCACAF semifinals. Montreal earned a 2–2 draw in the first leg in Mexico last Tuesday, which put them in decent shape to reach the semis. Pachuca needed to win or play to a high scoring draw (3–3 or higher). As a result, Montreal advances for having scored two away goals to Pachuca’s one.

“It’s all just electric,” said Porter in an on-field interview with TVA Sports. “I can’t even imagine playing in front of 38,000…best situation I could imagine.”

Porter’s goal dug the Impact out of a hole after central defender Laurent Ciman gave away a penalty in the 80th minute. German Cano slotted it home and Montreal was in dire straits needing a goal with 10 minutes plus stoppage time left.

“I think the team was formidable,” said a relieved Ciman. “Today I thank my teammates who saved me.”

Scottish midfielder Callum Mallace came to the rescue with a driving run from his own box and then made a brilliant long pass to Porter. The 21-year-old Porter chested it down, used his size to fight off a defender, and put it through Oscar Perez’s legs.

Impact coach Frank Klopas’ went with the same starting lineup in Mexico and adopted a defense-first strategy. Dominic Oduro was the lone striker and had little success against the Tuzos defense.

Montreal created very little in the first half and didn’t have a shot on target. The home team was getting constantly beaten down their right flank as Hirving Lozano continually tortured Victor Cabrera. But the Impact held strong, rode a bit of luck, and play started opening up in the second half.

Pachuca had the better of the chances, but some miraculous defending from goalkeeper Evan Bush and Cabrera kept the Mexicans from scoring in the second half from open play.

Today I thank my teammates who saved me.
— Laurent Ciman

It was a tense game and emotions boiled over with Klopas getting ejected after Porter’s tying goal. The “Big O” breathed a huge sigh of relief after not reliving the 2009 experience where they lost to Santos Laguna in the quarterfinals after having a commanding first-leg lead.

The Impact probably have their most complete squad and the maturity and resilience showed over the two games.

It was a solid tactical team performance in Mexico with Dilly Duka getting the plaudits for scoring two goals. And in the second leg, they did enough to get the result even after some poor judgment by Ciman to concede the penalty.

Pachuca had an excellent pedigree in CONCACAF Champions League, winning four times. Meanwhile, Montreal is now in its first semifinal.

Up next for the Impact is a semifinal clash with either D.C. United or Costa Rican team Alajuelense. The Costa Ricans hold a commanding 5–2 lead after the first leg.

Regardless of what happens in the semis, the Montreal Impact have made serious strides to put behind them a forgetful MLS season last year. The future is very bright for the Impact.