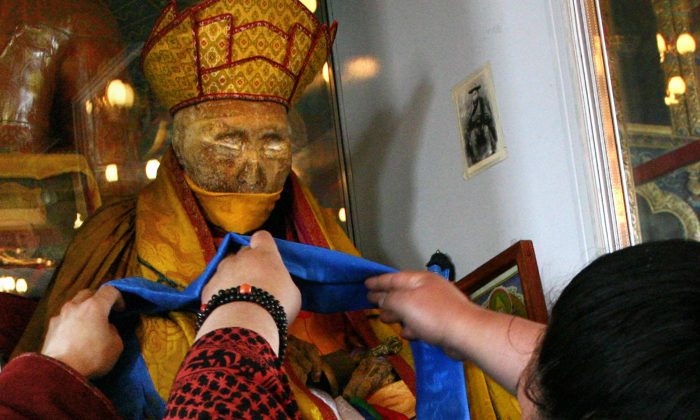 An undated photo shows a believer decorating the mummy of Dasha-Dorjo Itighelov, a Siberian Buddhist leader who looks and feels just the same as when he died in 1927 in a temple in Ulan-Ude, the capital of the Buryat republic. (HO/AFP/Getty Images)
Beyond Science

The body of a Russian Buddhist leader who died 80 years ago is not showing any signs of decay to this day.

Dashi-Dorzho Itigelov passed away in 1927. He left a note for monks to exhume his body at a later date. When the Buddhist monks exhumed his body 48 years later in 1955, they were astonished to find no signs of decay.

They exhumed the body again 22 years later in 1973 and were again stunned to find the body in its original state. The monks kept their findings secret, fearing that the Soviet communist regime could destroy the body as part of it’s massive campaign to wipe out religion.

The monks exhumed the body again in 2002, well after the collapse of the soviet regime. The body still appeared alive. This time, they made the miracle public and called on scientists to examine it. The body appeared preserved as though it was mummified, although no mummification was actually performed.

“Samples taken 75 years after the body had been buried, show that the organics of the skin, hair, and nails of the dead man aren’t any different from that of a living human,” said Galina Yershova, professor of history at the Russian State University for Humanities, according to Pravda.ru.

“His joints flex, the soft tissues are elastic just like in a living person, and after they opened the box, where the body of the Lama lay for 75 years, there was a very pleasant fragrance,” Yershova said.

“In my years of practice I have encountered quite a few instances of preserved bodies, but those were either the result of mummification or extreme environmental conditions,” Professor Viktor Zvyagin of the Federal Center of Forensic Medicine told the Buddhist Channel in a telephone interview. “But this is something different, and for me, incomprehensible. It’s a phenomenon that calls for the most detailed research.”

According to the results, the protein structure of the body was not damaged; it was identical to the one of a living person.

The miraculous body has become holy for Buddhists in the Russian region of Buryatia, where it now rests in the Ivolgin Buddhist Monastery in the regional capital of Ulan-Ude.

Itigelov’s fame reached far and wide. In 2013, Russian president Vladimir Putin visited the monastery. The president spent some time alone with Itigelov at the beginning of his visit. Before leaving he went again to say “farewell”, according to Putin’s press secretary.

The president noted that Buddhism is one of Russia’s traditional religions. He also vowed the government’s support for the monastery.

The Soviet Union, under Stalin, repressed all manifestations of religion, executing hundreds of lamas and destroying 46 Buddhist temples and monasteries. In the years since the Soviet Union collapse, across Russia the Buddhists have begun to thrive again, rebuilding ruined temples and attracting more followers.

Hambo Lama Itigelov studied at the Anninsky Datsan, the Buddhist University in Buryatia. Itigelov received degrees in medicine and philosophy (on the nature of emptiness). He also created an encyclopedia of pharmacology.

In 1911, Itigelov became a Hambo Lama, the head of the Buddhist faith in Russia. During the period from 1913 to 1917, he opened the first Buddhist temple in St. Petersburg. He also published religious tractates and teachings and united many of the religion’s factions.

The Hambo Lama was invited to celebrate the 300th anniversary of the Romanov family, and on March 19, 1917, the Russian Tsar Nikolai II gave him the St. Stanislav Award.

During the First World War, Itighelov was helping the army with money, clothes and medications. He also had built a set of hospitals where lama doctors helped to cure wounded militants. For his contributions, Itighelov was awarded with St. Anna medal.

In 1926, he warned the Buddhist monks about the coming ‘red’ terror and advised them to flee to Tibet. But he himself never left Russia. His prediction about the red terror came true. The Communist regime killed an estimated 30 million Russian people in the decades the followed.

In 1927, Itighelov told lamas that he was preparing to leave this world. He started a meditation and soon was dead.