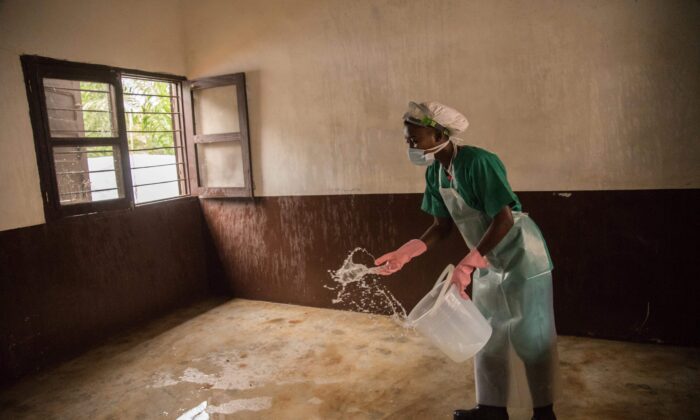 A treatment room at a monkeypox quarantine area in Zomea Kaka, in the Central African Republic, on Oct. 18, 2018. (Charles Bouessel/AFP via Getty Images)
International

Monkeypox Outbreak Has Spread to More Than 20 Countries: WHO

The World Health Organization (WHO) said Friday it is investigating about 200 cases of monkeypox in 20 countries that are not generally known to suffer outbreaks of the rare, smallpox-like virus.

Approximately 200 confirmed cases and more than 100 suspected cases of monkeypox have been reported so far, said Maria Van Kerkhove, the WHO’s COVID-19 technical lead, according to CNBC. More cases of the virus will likely be reported as surveillance of the disease continues.

The recent spread of the virus appears to have occurred at two rave-like events in Belgium and Spain in recent days, while the Centers for Disease Control and Prevention (CDC) and WHO have suggested monkeypox is spreading primarily via homosexual males.

It’s not clear if there have been any associated deaths from the recent outbreak of monkeypox, which is considered endemic to several African countries and related to smallpox. CDC officials have said the United States has tens of millions of vaccines for smallpox that can be deployed to deal with the virus’s spread if need be.

“The first sequencing of the virus shows that the strain is not different from the strains we can find in endemic countries and (this outbreak) is probably due more to a change in human behavior,” said Dr. Sylvie Briand, WHO’s director of pandemic and epidemic diseases, according to The Associated Press.

And Briand said that based on how past outbreaks of the disease in Africa have evolved, the current situation appeared containable.

Still, she said WHO expected to see more cases reported in the future, noting that the agency doesn’t “know if we are just seeing the peak of the iceberg [or] if there are many more cases that are undetected in communities.”

The first U.S. monkeypox case was reported in Massachusetts on May 18. Soon after, officials confirmed a case in New York City before health officials reported cases in other states.

“These cases were suspected by local clinicians. They were identified by local laboratories and triggered local public health action to help with treatment and management of any potential contacts,” Walensky told reporters.

When asked for comment on whether the government will implement any rules around monkeypox as it did with COVID-19, President Joe Biden told reporters that it’s likely the federal government will not issue any mandatory quarantines. Earlier this month, officials in Belgium implemented a mandatory, 21-day quarantine requirement for individuals who’ve contracted the rare virus.

Biden and other White House officials have said monkeypox is not as easily transmitted as COVID-19, the illness caused by the CCP (Chinese Communist Party) virus.