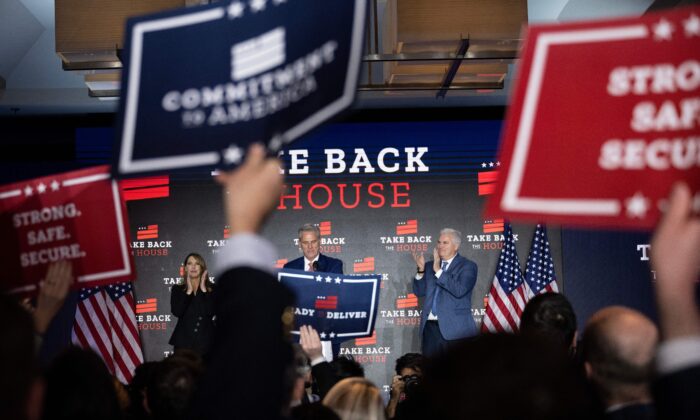 Amid widespread speculation about why the Republican Party did not quite realize the “red tsunami” at the voting booths that many had hoped for—though the GOP may yet win control of both houses of Congress, with the outcome of critical Senate races still unconfirmed—the most cogent explanation may have to do with economic headwinds less favorable to the opposition than sometimes described, according to one economic expert.

While President Joe Biden has been terrible for the economy, it is resilient in spite, not because, of his policies, the expert said.

In the closely watched Nov. 8 elections, the GOP met with disappointments in some of the highest-profile races, including those where they were seen to have the momentum going into election day.

Pennsylvania’s Senate candidate Mehmet Oz lost to a Democrat rival, John Fetterman, sometimes depicted as weak because of the continuing effects of a stroke last May; New Hampshire’s Senate candidate David Bolduc lost by nearly ten points to Democrat incumbent Maggie Hassan, who had angered her own base by visiting the southern border in April; and Republican insurgent candidate Lee Zeldin fell short of unseating Democrat Governor Kathy Hochul of New York despite public outrage over rising crime rates on Hochul’s watch.

What GOP leaders and voters hoped would be an election conforming to a historical model where the opposition party makes broad gains, and sends a message to the incumbents that they are out of touch and the public demands a change of course, looks to be, at best, a modest victory giving the GOP a narrow majority in the House of Representatives and possibly the Senate.

The results are particularly concerning for some Republicans because they had made the Biden administration’s bungling of economic policy—and an inflation rate that hit 9.1 percent in June, its highest level in more than forty years—their rallying cry, and expected the message to resonate among working Americans struggling to afford gas and put food on the table.

Only a day before the election, the Washington-based think tank Third Way released a survey finding that large swathes of the electorate feel the Democrats’ party and brand to be caught up in a “woke” agenda and out of touch with their day-to-day concerns, and that the Republican Party could be trusted to do a better job of handling fiscal matters.

“It is very unusual for this kind of economic record not to result in significant midterm losses for the incumbent party. Either the public is more confident about the economy, or they see recent developments such as inflation as superficial, or they think that there’s not a viable alternative to what the mediocre policy may be right now,” Brian Domitrovic, an economic historian who teaches at Sam Houston State University in Texas, told The Epoch Times.

According to Bureau of Labor Statistics figures, the unemployment rate stood at just 3.7 percent in October 2022. Total nonfarm payroll employment rose by 261,000 in the same month, with some of the strongest areas of growth in technology, manufacturing, and healthcare.

Coming just before the elections, these data may have ameliorated somewhat the feelings of voters that the country was mired in an economic boondoggle that called for a sharp repudiation of Democrat politicians and candidates, Domitrovic suggested.

“The unemployment rate is minuscule,” he said.

While Republican arguments about the economy and their plans to fix it may be generally solid, Democrats may have benefited, in the short term, from the perception that the economic news is not uniformly bad, Domitrovic said.

President Joe Biden’s lackluster economic record has been acknowledged even by contributors to mainstream liberal-leaning sources such as CNN Business, which cited CFRA Research figures contrasting the 1.9 percent decline of S&P 500 since Biden took office early in 2021 with its 52.2 percent climb in the first two years of Barack Obama’s administration and its 23.9 percent gain in the first half of Donald Trump’s term.

Even so, current stock market trends are not as severe as those traditionally associated with a bear market, Domitrovic said.

To put things in perspective, Domitrovic described what real stock market crashes have historically looked like, citing the example of the 1973-74 crash which saw the Dow Jones Industrial Average lose more than 45 percent of its value. Partly as a consequence, Republicans suffered a drubbing in the 1974 midterm elections, in which Democrats—also as a consequence of the Watergate scandal—gained 49 seats in the House and four in the Senate.

On March 16, 2020, as COVID-19 ravaged the country and much of the world went into lockdown, the Dow Jones Industrial Average continued a dramatic losing streak by falling almost 2,997.10 points, its largest decline in a single day of trading since the index came into being on February 16, 1885.

To say that current economic woes are not on par with those of the worst economic periods of modern history is not to praise the Biden administration’s performance—which is still dismal by any standard—but rather to illustrate that the urgency that might have driven larger numbers of Americans to register their alarm and disapproval of Biden’s policies may have been lacking this time around, Domitrovic believes.

For other observers and strategists, the GOP may have suffered from a lack of internal unity, with its vocal pro-Trump factions and its elements striving to present a more moderate image. As a result of this disunity, some voters may have felt that a strong uniting message eluded them.

“Trump’s meddling in Republican primaries hurt as his picks in Pennsylvania, Georgia, and Arizona are all inexperienced, flawed candidates. In case after case, Republicans who were independent of Trump outperformed Trump loyalists,” Keith Naughton, the principal of Germantown, Maryland-based Silent Majority Strategies, told The Epoch Times.

“Topping it off were Trump’s unending complaints about 2020. That and his tacit support of the Jan. 6 rioters turned off independents and drove Democrat turnout,” Naughton continued.

The Epoch Times has reached out to the Republican National Committee for comment.