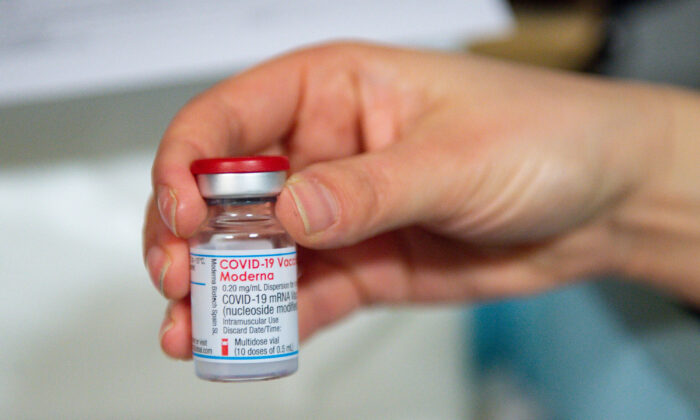 Moderna’s COVID-19 vaccine is up to four times more likely to cause heart inflammation—myocarditis or myopericarditis—than Pfizer-BioNTech’s COVID-19 vaccine, a study published Dec. 16 in the British Medical Journal suggests.

“Vaccination with [Moderna’s vaccine] was associated with a significantly increased risk of myocarditis or myopericarditis in the Danish population,” and the rate was “threefold to fourfold higher” with the Moderna vaccine compared to the Pfizer-BioNTech vaccine, authors said in the study, which spanned almost 85 percent of Danes, or 4.9 million people aged 12 and older.

The increased risk of myocarditis or myopericarditis with the Moderna vaccine was “primarily driven by an increased risk among individuals aged 12–39 years,” the researchers from Denmark’s Statens Serum Institute said.

The population-based cohort study also corroborated previous studies and reports such as those from Israel and the United States that say there’s an increased risk of myocarditis or myopericarditis with taking the mRNA-based Moderna or Pfizer vaccines.

Absolute Number of Cases ‘Low,’ Most Were ‘Mild’

Authors of the study wrote that the absolute rate of myocarditis or myopericarditis in the mRNA-based vaccines “was low, even in younger age groups.”

“The benefits of SARS-CoV-2 mRNA vaccination should be taken into account when interpreting these findings,” they said. “Larger multinational studies are needed to further investigate the risks of myocarditis or myopericarditis after vaccination within smaller subgroups.”

In the study, researchers analyzed nationwide registers in Denmark that show the country’s population data on vaccination, hospital admissions, and results of laboratory assays of blood samples.

Most of the cases were “predominantly mild,” the authors wrote.

They noted that Pfizer’s vaccine “was only associated with a significantly increased risk among women,” which contrasts with the results of studies from Israel and the United States. The discrepancy could be explained by the average age of the vaccinated population, the time span between the first and second shot, or because fewer Danes had tested positive for COVID-19, they said.

The authors also noted that the Pfizer vaccine was found “to be significantly associated with myocarditis or myopericarditis event when using a narrowed 14-day time window.”

In a statement, study author Anders Hviid said the findings of the study “do not generally overshadow the many benefits that come with being vaccinated.”

“One must keep in mind that the alternative of getting an infection with COVID-19 probably also involves a risk of inflammation in the heart muscle,” he wrote.

The researchers said they found both Moderna and Pfizer vaccines were associated with about a 50 percent reduced risk of cardiac arrest or death compared with unvaccinated people.

The observational study can’t establish any causal relationships, and there may be some sources of bias, such as increased public awareness of potential side effects of the mRNA-based vaccines, that may have affected the results, the authors said.

In the United States, vaccine manufacturers are immune from liability for any adverse reactions unless there’s “willful misconduct” involved.

Health care providers who administer COVID-19 vaccines are required by law to report any serious adverse effects or vaccination administration errors to the Vaccine Adverse Event Reporting System (VAERS), hosted by the U.S. Department of Health and Human Services.