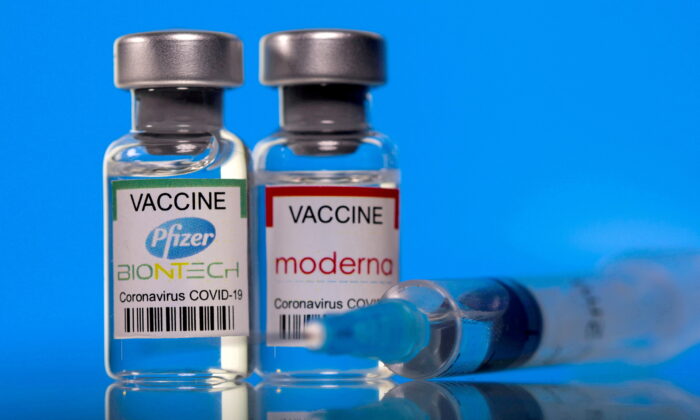 A French peer-reviewed study concluded that for both the Pfizer and Moderna vaccines, the risk of myocarditis skyrockets a week after vaccination.

The risk of myocarditis after mRNA vaccination was 8 times and 30 times greater than unvaccinated control groups for BNT162b2 (Pfizer-BioNTech) and mRNA-1273 (Moderna), respectively.

The largest association for myocarditis following the Moderna jab was 44 times higher risk for persons aged 18 to 24 years.

As for the Pfizer shot, in relation to the same age group, the risk was 13 times higher.

Infection with the Chinese Communist Party virus yielded, by comparison, a 9 times greater risk of the same condition.

Myocarditis refers to the inflammation of the heart muscle—a life-threatening condition. There are many established causes for this heart condition. The leading cause—according to modern science’s most recent discoveries—is viruses; but during the pandemic, COVID mRNA vaccines have earned a place as a top suspect for myocarditis.

The new study’s goal was to provide an assessment of association with vaccines across sex and age groups.

Verma also thinks the CDC’s analysis “erroneously suggests” that risk of myocarditis after SARS-CoV2 infection is greater than after mRNA COVID-19 vaccination.

“For the cases of myocarditis after SARS-CoV2, CDC uses officially confirmed PCR+ ‘cases,’ even though their own seroprevalence data demonstrates that far more people have been infected than officially conformed PCR+ ‘cases.’ For example, seroprevalence data as of Feb 21, 2022, reveals 75 percent (about 54 million) of all children have been infected compared to 12 million officially confirmed PCR+ ‘cases’ (i.e., the actual number of kids infected is 4.5 times greater than PCR+ ‘cases’). Therefore, calculating the risk of myocarditis after SARS-CoV2 infection, the rate noted by CDC would therefore need to be reduced by 4.5 times. Thus far, CDC has not adjusted its COVID-19 morbidity and mortality data accordingly,” said the cardiologist, who practices in Coachella Valley, California.

It is limited by using solely hospital discharge diagnoses. Therefore, it does not include those who may have died before being hospitalized or those whose symptoms were not severe enough to be hospitalized.

“There have been reports (pdf) of autopsy-proven myocarditis after vaccination and anecdotal evidence of patients being dismissed by ER and never being hospitalized. Adjusting for these excluded subsets may yield even higher risk than reported in this study. Follow-up of the patients in this study was limited to one month after discharge. However, a previous cardiac MRI study found about 75 percent of patients with vaccine-associated myocarditis can have persistent MRI abnormalities 3–8 months after initial diagnosis,” Verma said.

The authors of the study didn’t analyze the effect of booster vaccination since it is not yet recommended for young adults in France.

In the United States, however, booster injections are mandated by colleges and universities, employers, and even some state public health departments irrespective of age or prior infection.

A research paper published on May 18 studied the pandemic control measures—which included vaccine and mask mandates, as well as isolation and contact tracing—of Cornell University, which was almost completely vaccinated, and found these policies were “not a match” for the Omicron variant and its rapid spread.

Recently, a new term has been highlighted in media outlets: “sudden adult death syndrome,” or SADS.

Underlying factors for SADS include undiagnosed myocarditis, inflammatory conditions, and other conditions that cause irregularities in the electrical system of the heart, thereby triggering cardiac arrest.

Data compiled by the International Olympic Committee shows 1,101 sudden deaths in athletes under age 35 between 1966 and 2004, giving an average annual rate of 29, across all sports. Meanwhile, between March 2021 and March 2022 alone—a single year—at least 769 athletes have suffered cardiac arrest, collapsed, or have died on the field, worldwide.

Among EU FIFA (soccer/football) athletes, sudden death increased by 420 percent in 2021. Historically, about five soccer players have died while playing the game each year. Between January and mid-November 2021, 21 FIFA players died from sudden death.

Joseph Mercola contributed to this report.