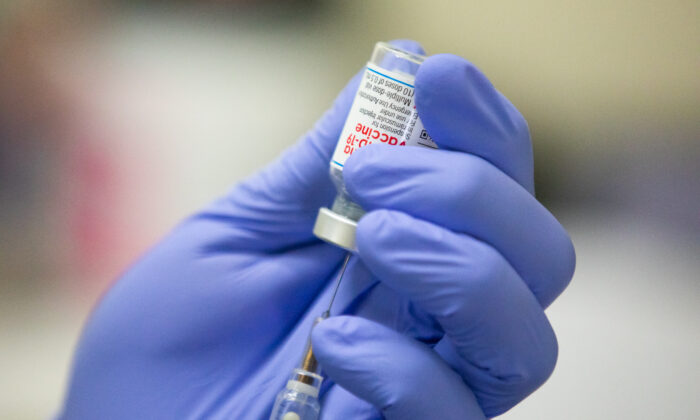 People Under 30 Should Get Pfizer Vaccine Instead of Moderna: French Health Authority

Moderna Inc. on Tuesday sought conditional marketing authorization with the European Medicines Agency for use of its COVID-19 vaccine in children aged 6 to 11, coming as French authorities said people under age 30 shouldn’t receive the shot.

“This marks our first submission for the use of our vaccine in this age group,” said Stephane Bancel, Chief Executive of Moderna, adding the firm will submit the data to other regulatory agencies around the world.

But on Tuesday, the French National Authority for Health (HAS) announced that people under the age of 30 should receive Pfizer’s COVID-19 vaccine instead of Moderna’s shot when possible, citing concerns that Moderna’s vaccine carried a higher risk for heart issues. They stressed the risk of developing the heart condition is “very rare,” according to a translated statement posted on the agency’s website.

“Within the population aged under 30, this risk appears to be around five times lesser with Pfizer’s Comirnaty jab compared to Moderna’s Spikevax jab,” the HAS said Monday.

The vaccine was authorized for use in teens aged 12 to 17 years by the European Union in July, but several countries including Sweden have paused its use for people aged 30 and younger due to rare heart-related side-effects.

“Conversely, the HAS recommends that the [Moderna] vaccine, whose vaccine efficacy seems slightly better, can be used as a primary vaccination” or booster shot for individuals over the age of 30, the HAS said.

Several other countries, including Finland, Canada, and Iceland, have taken a defensive stance against Moderna’s vaccine over heart-related safety issues potentially impacting younger adults. Sweden last month announced it would stop providing the vaccine to those born in 1991 or later, and Denmark halted distribution to anyone under 18.

In October, the European Medicines Agency regulator approved Moderna’s booster dose for all age groups over 18 if they have received the second dose at least six months prior. Months before that, the EMA said it found a connection between the Moderna and Pfizer vaccines, which use mRNA technology, and instances of myocarditis and pericarditis—two types of heart inflammation.

The agency then ordered that the vaccines have to list the risk of developing the potentially severe health conditions as possible side effects. Those cases generally occurred within 14 days from vaccination, more often after the second dose and more commonly in younger men, the EMA said at the time.

According to the EMA, however, the benefits of both mRNA shots in preventing COVID-19 outweigh the risk. U.S. federal health and drug officials, as well as the World Health Organization (WHO), have made similar conclusions.

The drugmaker sought U.S. authorization of its vaccine for use in teens in June and is awaiting a decision by the U.S. Food and Drug Administration.

Moderna hasn’t immediately responded to a request for comment.

After Sweden paused usage of the vaccine among younger adults, Moderna said it was aware of the situation.

“These are typically mild cases and individuals tend to recover within a short time following standard treatment and rest. The risk of myocarditis is substantially increased for those who contract COVID-19, and vaccination is the best way to protect against this,” the company told news outlets in early October.