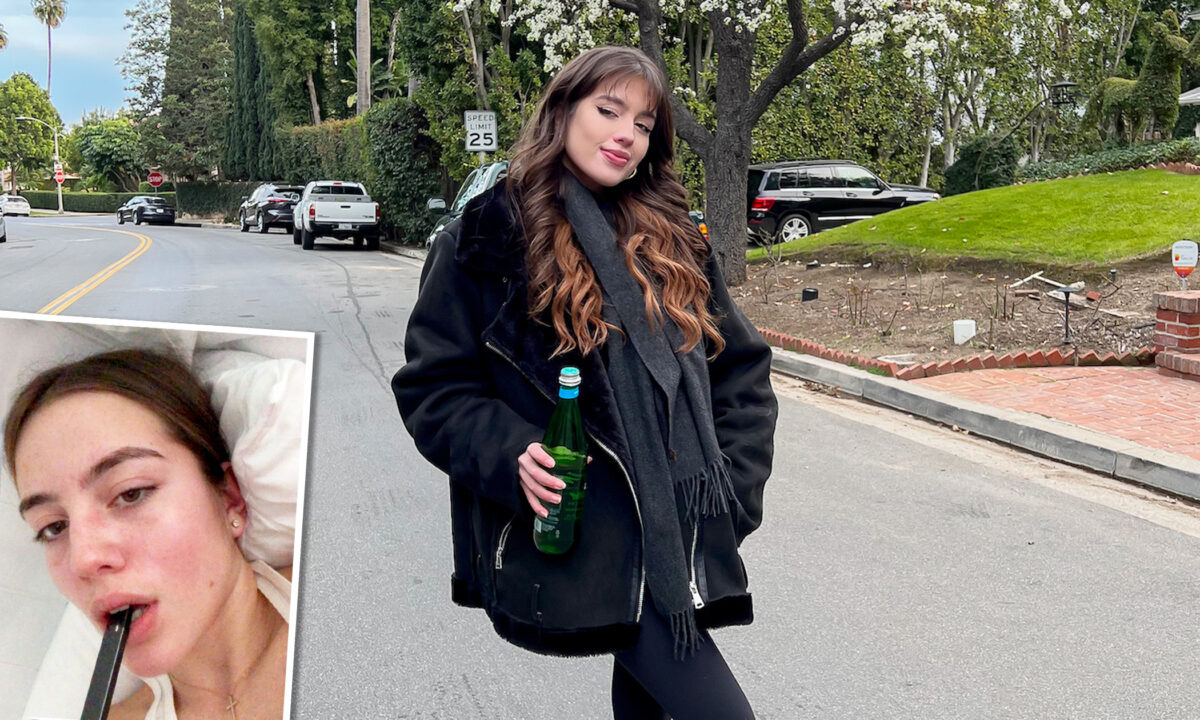 Model Suffers Extreme Muscle Pain After Becoming Addicted to Vaping as a Teen, Now Warns Others

A model from Los Angels, California, claims that her extreme muscle pain and weakness was caused by becoming addicted to vaping as a teenager. Now, she has ditched the habit for good, but still feels the lasting effects of dermatomyositis, and wants to warn others with her cautionary tale.

Vanessa von Schwarz, 20, started vaping when she saw her friends were all using vapers in the school toilets. It wasn’t long before she was hitting her e-cigarette almost continuously, and would feel nauseous and angry if she left it for too long.

“For some reason when I started vaping, naivety assured me my whole life was changing,” Vanessa said. “I felt like it gave me something I didn’t have before; I was thinner, more confident, and I was sure this new me was all thanks to this little metal device I carried in my pocket.”

Vanessa remembers vaping for the very first time in the toilets of her high school in April 2017, when she was just 15. She began noticing that every lunch break, whenever she entered the bathroom, there would always be groups of girls standing in a circle, smoking a weird-looking thin black stick that would light up.

“All the ‘cool’ girls and guys in my school vaped, it was normal,” Vanessa said.

In no time, one of Vanessa’s close friends bought one and insisted that Vanessa tried it too, assuring her that nothing would happen.

However, not long after, Vanessa got into a routine of vaping anytime she was with her friends, until one Friday evening she went home and started to crave a hit.

“I couldn’t stop thinking about the device and how satisfied I could be if I just had my own,” she said. “Well it’s not cigarettes, so I can’t smell like anything, my parents won’t ever know because it’s so small and secretive, and I’ll just throw it away before I get addicted.”

Vanessa went on to buy her own device, and it got to the point where she needed it to be around her at all times or she would feel nauseous and cranky.

“I enjoyed the physical head rush vaping would give me. Every time I took a hit of my vape, I felt like I was inhaling a big deep breath, one that actually satisfied my body and relaxed me,” she said. “I started to truly believe that vaping had changed my life for the better.”

Struggling with a lot of anxiety, Vanessa felt comfort in having the device readily available and in it being socially acceptable that she soon found that she was vaping almost continuously. This made it hard for her to let go.

“I definitely think the ‘child-friendly’ flavors made the initial use of the vape so enticing,” she said. “It tasted like candy and was truly delicious.”

However, as time passed by, Vanessa found the fruity flavors to be truly nauseating, and thus mint became the default, and the flavor seemed to suppress hunger the most.

“My friends and I would never eat breakfast or lunch,” she said. “We mostly just vaped away our hunger and cravings.”

Not long after, Vanessa started seeing side effects.

One morning, she got out of bed and took a hit. However, after that, she woke up on the floor and didn’t remember what happened.

“I’d clearly fainted, and I was fine, but it was so odd because that had never happened to me in my life,” she said.

From then on, whenever she used the device, she’d feel weak in the knees, her fingers and toes would go numb, and her heartbeat sped up.

In 2018, Vanessa developed migraines and consistent nausea after just a few hours without a hit. Her weakness got worse, but she managed to just shrug it off until she took up a stylist job and had to be on her feet for up to nine hours a day.

“On top of the consistent migraines and nausea, I suddenly was unable to bend my legs fully without being in an immense amount of pain,” the filmmaking student at The New York Film Academy said. “I would come home from work in absolute agony, crying because of how badly my legs ached.”

She could suddenly feel that her upper body, legs, arms, and fingers grew weaker and weaker.

“It began to hurt just putting my hair in a ponytail, or even holding a water bottle was too heavy for my hands,” Vanessa said. “I couldn’t lift my neck up when I was laying down, and when I’d fall because my legs would give out due to weakness, I couldn’t get up from the ground.”

On Nov. 5, 2019, while getting ready for work, Vanessa’s heart started to beat very quickly and she felt lightheaded. After managing to get out the door to go, she realized she forgot something but tripped while running back up the porch steps and hit her head.

She was then rushed to the hospital by mom Juana, 50, and doctors quizzed her about her recent weakness and fall. Medics originally concluded that Vanessa must have come into contact with a toxic substance and that she needed hydrating to remove it from her body, but she had failed to mention her vaping habit.

It wasn’t until they noticed her creatine kinase levels in her blood were increasing, despite being on constant IV hydration, that she admitted she’d been continuing to vape in hospital in secret.

“I had to have a serious conversation with myself about whether or not I was ready to let this addiction go, and I thought bringing up vaping to the doctors would get rid of any paranoia I had about my vape,” she said. “Once they knew how excessive the use was, they immediately advised me to stop, stating there was not enough research to know how vaping can affect the body.”

In mid-December, she was discharged from hospital, but didn’t stop vaping until a year later, convinced by some studies she found online that said it had nothing to do with her condition.

“That was enough for me to continue my use, despite the painful symptoms I continued to feel,” said Vanessa. “In 2020, I was vaping just as heavily as I had been before, but suddenly, the symptoms started to become extremely overbearing to the point where I would have constant panic attacks.

I would be in public hitting my vape, and all of a sudden my heart would start pounding in my chest, I would feel extremely lightheaded, I started trembling as my muscles tightened, and I felt nauseous all at once.”

She also recalled that her bones felt shaky and she would feel like she was going to drop on the floor.

By then, Vanessa knew that she had to make a change, and she went to her doctor for help, who prescribed her nicotine patches to ease the cravings.

After about a month away from her device, her symptoms eased up and Vanessa found out that she had more energy, and her muscles were not aching so much.

“I don’t need to constantly worry about losing my vape or what I’ll do if I can’t vape for more than an hour,” Vanessa said. “I don’t run to the bathroom every 30 minutes to hit my vape either, I no longer feel as controlled by something that controlled me for so long.”

To this day, Vanessa still suffers from dermatomyositis, which causes extreme muscle pain and weakness, and believes that the condition was caused by her early addiction to vaping.

She hopes that by sharing her experience she can warn other young people about the potential dangers of what is often thought to be a safer alternative to smoking.

“Anyone who may be struggling with any sort of addiction, please know there is help,” Vanessa said. “It’s a common misconception to believe nicotine is a small, minor addiction, and while that can be true for a lot of people, there are still those remaining that depend on the substance for their happiness, when it is incredibly short-lived.”

She implores that people should not let any addiction take over their body’s health, because the effects are irreversible, adding that her case was an example of how detrimental these “minor” and legal substances can be to one’s body.

“I hope there could be more awareness and action taken against teens vaping, especially in schools,” she said. “Despite the intention, the effects on the body can be severe and my case is not the first or the last of this kind.”

Vanessa’s father, Dr. Ernst von Schwarz, 60, is a clinician-researcher and has written a report on his daughter’s case. He believes her serious side effects are “most likely” attributed to her vaping.

“Initially, [vaping] was introduced as a way to quit smoking, but now the role has changed immensely because it has become somewhat fashionable and does attract a lot of young people,” he said. “There is very little published on the potential induction of vaping and its toxic effects on the connective tissue.”

Dr. Ernst explains Dermatomyositis to basically be an inflammation of the skin and the muscle tissues, commonly seen in elderly people and those with chronic systemic conditions, end-stage cancer patients, or in patients with a family history of it.

However, he also notes that, sometimes, it can be a result of the side effects of certain drugs. In the case of Vanessa, she was not on any medications, and she didn’t have any family history that could lead to this kind of connective tissue disease.

“It is with a high probability that vaping in her particular case caused systemic dermatomyositis and inflammatory response,” he said. “It does demonstrate how dangerous, especially for healthy young people, something like vaping can be.”