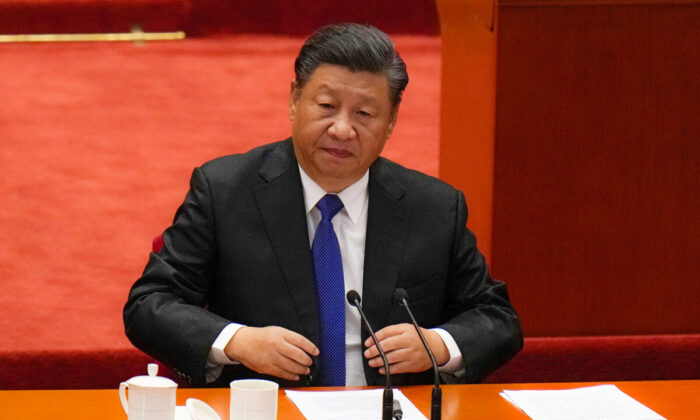 Chinese leader Xi Jinping arrives at an event commemorating the 110th anniversary of the Xinhai Revolution at the Great Hall of the People in Beijing, on Oct. 9, 2021. (Andy Wong/AP Photo)
Asia & Pacific

Taiwan has called on Beijing to abandon its provocations aimed at the self-ruled liberal democratic island.

Taiwan’s Mainland Affairs Council declared that Beijing needs to “abandon its provocative steps of intrusion, harassment and destruction” and return to talks, in response to comments made by Chinese leader Xi Jinping on the eve of Taiwan’s national day.

“Reunification of the nation must be realized, and will definitely be realized,” Xi declared in Beijing in a speech commemorating the 110th anniversary of what the mainland calls the Xinhai Revolution, which established the first two Chinese republics: the CCP on the mainland and Taiwan, also known as the Republic of China.

The mainland’s ruling Chinese Communist Party (CCP) claims that the self-governed island of Taiwan is a province of China.

Taiwan’s presidential office spokesperson Chang Tun-han said, “The nation’s future rests in the hands of Taiwan’s people,” again rejecting the CCP’s claim of “one country, two systems,” which it said has brought devastation to the political freedoms of people in the Chinese-ruled city of Hong Kong.

Hong Kong, a former British colony, reverted back to Chinese rule in 1997 under the promise that the ruling regime would allow political autonomy for the city.

But the world has since witnessed Hong Kong’s major pro-democracy newspaper Apple Daily shut down by the pro-Beijing Hong Kong government, with the newspaper’s leader arrested. Student unions, trade unions, and human rights groups have dissolved in succession amid pressure from the authorities.

Xi, who chiefly used the speech to underscore what he believes is a need for the ruling communist party’s leadership in Taiwan, also called the island’s independence the “biggest obstacle to the reunification of motherland,” a policy goal of the CCP, and a “serious hidden danger to national rejuvenation.”

“Reunification through peaceful means is the most in line with the overall interest of the Chinese nation, including Taiwan compatriots,” Xi said.

But Beijing has not renounced the use of force to bring Taiwan into the fold. Just days earlier, the regime ramped up its military threats on Taiwan by sending a record number of warplanes near the island.

The regime marked its 72 years of rule over the mainland by buzzing the liberal democracy of Taiwan with its largest show of military might, deploying a total of 150 fighter jets, bombers, among other military aircraft over the course of five days and sounding a warning message far beyond the island.

With cross-strait tensions rising to a historic high, Taiwan’s defense minister Chiu Kuo-cheng warned on Oct. 6 that the regime would be capable of launching a “full-scale attack” within four years.

“If Taiwan is not sufficiently prepared, and if Western democracies do not stand up, the CCP could get reckless,” Yeau-tarn Lee, a political science professor at Taipei’s National Chengchi University, told The Epoch Times.

Taiwan has proposed to invest another $8.69 billion to modernize its defense weapons. “Taiwan must make ready for a fight even though it is not looking for one,” Lee said.

A U.S. State Department spokesperson reiterated the United States’ “rock-solid” commitment to Taiwan, saying it “will continue to support a peaceful resolution of cross-Strait issues, consistent with the wishes and best interests of the people on Taiwan.”

“We urge Beijing to cease its military, diplomatic, and economic pressure against Taiwan and instead engage in meaningful dialogue with Taiwan,” the spokesperson told The Epoch Times on Saturday.

Taiwan celebrates its national day, the start of the 1911 Revolution, on Oct. 10, with President Tsai Ing-wen scheduled to give a keynote address in Taipei.

On Saturday night, at a reception at an airbase in Hsinchu of northern Taiwan, one day ahead of the national day celebration, Tsai thanked the armed forces for protecting Taiwan, without mentioning the tensions with the CCP.

“We will continue to work hard to hold fast the front lines of democracy and freedom,” she said.