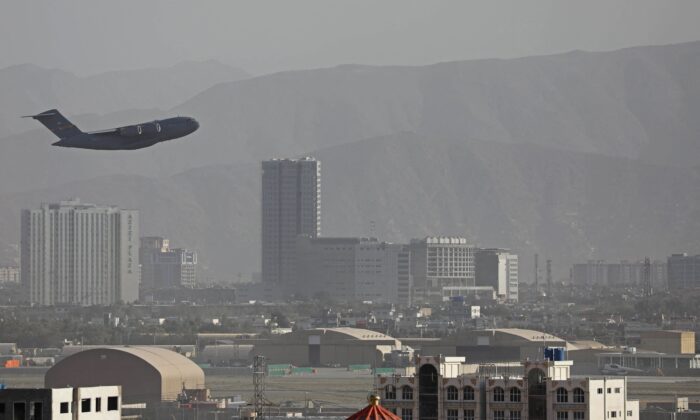 With Afghanistan, Media’s Pro-Biden Views Outweighed by Its Anti-Americanism

Shortly after President Biden announced last week that he had “no regrets” about America’s exit from Afghanistan, in spite of the inescapable tragedy unfolding there as a result of it, NBC News ran a story on their website headed: “What is the ‘Biden doctrine’? Afghanistan pullout offers clues.”

Some clues! Some doctrine! But, looked at in the right way, the “pullout” did offer some clues about the Biden strategy for dealing with the Islamist threat. Not that this strategy relied, as NBC’s White House correspondent Josh Lederman supposed, on “pragmatism” but that it could hardly be said to have existed at all.

Lederman was hardly the only media sycophant looking for ways to justify the actions of the president he and so many others had taken such pains to put into office.

The ever-reliable and indefatigable Jennifer Rubin of The Washington Post could find nothing in the Afghan tragedy that could be blamed on President Biden. She wasn’t even sure it was a tragedy, noting that “the media’s premature declaration of ‘failure’ looks off-base. Indeed, the coverage has tended to ignore or minimize the achievements of U.S. military and State Department personnel, which have exceeded any previous noncombatant evacuation operation.”

Like the President himself, she appears to have had no regrets about the Afghan pullout.

Writing for The New York Times, Ezra Klein on Aug. 26 scolded: “Let’s Not Pretend That the Way We Withdrew From Afghanistan Was the Problem.” Gee, Ezra, was it even a problem?

Yes, Ezra allowed that it was. “A better withdrawal was possible,” he allowed, but the real problem was that we were in Afghanistan in the first place. “There was no good way to lose Afghanistan to the Taliban.”

He’s like the farmer who, asked for directions to a neighboring farm, replies: “If I were you, I wouldn’t start from here.” Very helpful, that is—at least in absolving Biden of any blame for the fiasco and shifting it onto his predecessors.

And yet the attentive might have noticed that there was also, for the first time since the President became the front-runner for the Democratic nomination 18 months ago, at least an implied note of criticism of him in quite a lot of the media’s coverage of the “pullout”—especially that which comes in the form of broadcast images of obvious human tragedy to which questions of “how we got here” are irrelevant.

Indeed, over at National Review, my friend Rich Lowry calls their coverage of the Afghanistan disaster “the media’s finest hour.”

He writes that, “on Afghanistan, Joe Biden in effect set out to test how much shameless incompetence and dishonesty the media would accept. The answer? Not nearly enough. The press is blatantly biased and has become even more so over time, repeatedly propagating false narratives that have shredded its credibility. Still, there are limits beyond which even it can’t be pushed.”

Judging by the howls of protest from die-hard Biden believers, he’s right, too. Eric Levitz of New York magazine’s “Intelligencer” column, for example, complains that “The Media Manufactured Biden’s Political ‘Fiasco’ in Afghanistan ‘Straight news’ has chosen sanctimony over circumspection.”

Actually, according to Eric, everything in Kabul is hunky-dory just now.

“America’s withdrawal from Afghanistan has yet to cost our nation a single casualty,” he wrote—obviously, before Thursday’s bombing at the Kabul airport killed twelve U.S. Marines and a Navy medic among other victims.

“Evacuations of U.S. citizens and allies from Kabul’s airport are proceeding at a faster pace than the White House had promised, or than its critics had deemed possible. Afghanistan’s decades-long civil war has reached a lull, if not an end. On the streets of Kabul, ‘order and quiet’ have replaced ‘rising crime and violence.’ Meanwhile, the Taliban is negotiating with former Afghan president Hamid Karzai over the establishment of ‘an inclusive government acceptable to all Afghans’.”

In other words, what’s not to like? In his view, it’s only the nasty, biased, right-wing media that would have you believe that there’s anything “disastrous” or “humiliating” to be seen here.

It’s true that this view of the matter is not a common one in the media. But as a long-time observer of their ways, I’m a bit more cynical than Lowry is about their new-found love of telling truth to (Democratic) power.

I’m even more cynical than his NR colleague Ramesh Ponnuru, another friend, who writes at Bloomberg of the eight better explanations for the media’s apparent hawkishness on Afghanistan than that they have suddenly turned pro-war and anti-Biden.

The eight reasons, however, really boil down to one: that you can’t spin a military defeat—especially one in which the defeated are visible to news cameras—to make it look like victory.

All true, I have no doubt. But I think that, over and above these explanations for what looks to those with a narrowly political focus like a volte-face by the media, there is one, over-riding consideration.

For more important to the media mandarins even than their pro-Biden sentiments are their anti-American ones—and especially their permanent opposition to anything that looks like American military adventurism against the world’s bad guys.

They may not be overt about it, but in their hearts they delight in American defeats—as they did back in 1975 at the similarly sudden and chaotic American exit from Vietnam. Why? Because America’s military humiliation always equals, in direct proportion, their own vindication, and that of their reflexive anti-war bias. It’s an opportunity for one big I-told-you-so that they will never be able to pass up, even to please a media darling like Joe Biden.

The true note of media self-righteousness was struck in a “News Analysis” piece by Adam Nossiter in the Sunday New York Times.

“America’s Afghan War: A Defeat Foretold?” read the headline. “Recent history suggests that it is foolish for Western powers to fight wars in other people’s lands and that the U.S. intervention was almost certainly doomed from the start.” See? We told you so!

I don’t doubt that the media will smooth things over with President Biden in the weeks to come—at least if he isn’t so fatally weakened, politically, by then that they decide to turn on him again and cut him loose, permanently, from their good graces.

They may even come around to Levitz’s view that there was nothing so very bad about a Taliban take-over in Afghanistan after all—particularly if the news cameras are kicked out before the warlords get down to the serious business of reprisals against the remaining American allies and ancillaries.

But the media won’t forget to paste in their scrapbooks yet another demonstration, at least in their own eyes, of their bedrock conviction that America and America’s war-making power can never, ever, be a force for good in the world.