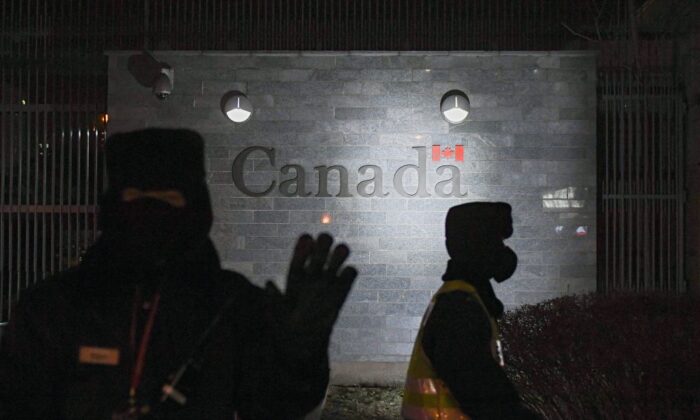 A guard tries to block photos being taken as he and a policeman patrol outside the Canadian embassy in Beijing, on Jan. 14, 2019. (Greg Baker/AFP via Getty Images)
Viewpoints

Because Prime Minister Justin Trudeau called an election, we may never know

A company owned by the Beijing Municipal Public Security Bureau (Beijing police) has a contract to run the visa application program for the Canadian embassy in China. This gives the Chinese regime’s interviewers the ability to extract information about the Canadian citizens of Chinese descent they’re visiting and to send spies into Canada while denying legitimate visitors access to the West.

The Canadian government scoffs at those who express concern. Public Safety Minister Bill Blair assured Parliamentarians that the personal information visa applicants disclose to the police-hired interrogators would never be put to an untoward purpose. Foreign Affairs Minister Marc Garneau stated that “we are not concerned,” adding that, “We have a lot of proof to show that we monitor [the activities of the visa application centers] very carefully.”

Those assurances, however, ring hollow, as seen by the experience last year of Dai Qing, one of China’s most prominent independent journalists, when she applied to visit Canada and the United States for a lecture series to discuss her new book, “Deng Xiaoping in 1989.”

Dai, whose writings are banned inside China but who is ordinarily permitted to leave the country, had obtained visas to Canada previously on numerous occasions, during which Canada’s Beijing embassy cheerfully and respectfully processed her applications. Not so once the Beijing police, unbeknownst to her, was put in de facto control. After submitting her visa application to them, which involved providing her biometric data and surrendering her passport, Dai was grilled in three rounds of supplementary questions by what were, in effect, Chinese undercover agents.

According to Dai, the visa agents demanded answers to the following extraordinary questions about her history decades earlier: “When did you join the army and when did you leave the army, were you conscripted or a volunteer, what was your rank, your duties and responsibilities? You must describe in detail, including arrests, combat detention, interrogation and support functions,” they pressed. “Who were the military officials in charge? You must list in detail, including direct supervisor, force/head, combat team/force, commander. What was the name of your unit (artillery, infantry, special forces), your location (base, city, province/region), the number of people you supervised?” And so on.

After four months of delays through such detailed questioning by what she thought were Canadian visa officials, and with no end in sight because Dai offered none of the sensitive information the police were seeking, she was told if she wanted her passport back that she would have to abandon her visa application. She asked for her passport back and cancelled her North American speaking tour, which would have included University of Toronto in Canada and Harvard in the United States.

The undercover agents in their visa application positions acted in service to the Chinese Communist Party. They attempted to plumb Dai’s history and her contacts going back a half century and more for possible future use, while stopping a book tour that would have exposed much that was unknown about one of China’s defining leaders. Dai, a former rocket scientist, had been a communist who knew numerous high-level officials.

When the Canadian public first learned that Beijing was determining who could and could not enter Canada from China, parliamentary committees on Canada-China relations held hearings into the implications. Contrary to Canadian government assurances about the benignity of the Beijing-police-run visa office, Ward Elcock, a former director of Canadian Security Intelligence Service, testified that “In reality, that institution or that office functions entirely within the control of the Chinese intelligence services,” creating information for the Chinese foreign intelligence service, “that is potentially gold.” Richard Fadden, another former director of CSIS, agreed, telling the press that “I cannot think of a more promising entry point for China’s cyberspies.”

After months of testimony, Canada’s parliamentary committee on citizenship and immigration issued a report demanding that the government terminate the contract and “bring the services back in-house at Canadian diplomatic missions in China.” It gave the Trudeau government 150 days to explain what seems almost incomprehensible—why would a sovereign nation allow a foreign government, let alone a communist government, decide who can enter its shores?