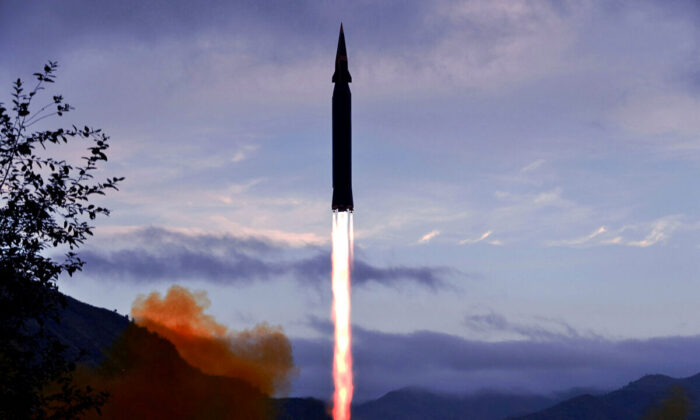 The newly developed hypersonic missile Hwasong-8 is test-fired by the Academy of Defence Science of the DPRK in Toyang-ri, Ryongrim County of Jagang Province, North Korea, in this undated photo by North Korea's Korean Central News Agency released on Sept.29, 2021. (KCNA via REUTERS)
Military

‘We Just Don’t Know’ How to Defend Against Possible Chinese Hypersonic Missile: US Ambassador

A new investigative report by the Financial Times asserted that China launched a nuclear-capable hypersonic missile, which circled the earth in a low orbit before cruising toward and narrowly missing a test target. The Chinese regime has officially denied the report’s findings, saying that the object in question was a spaceship.

U.S. disarmament ambassador Robert Wood said that Washington is concerned about China’s possible deployment of hypersonic weaponry, and said the United States hadn’t developed a means of countering it.

“But we have seen China and Russia pursuing very actively the use, the militarization of this technology, so we are just having to respond in kind … We just don’t know how we can defend against that technology. Neither does China, neither does Russia.”

A Weapon Without Rebuttal

The Financial Times report, which cited five people familiar with the matter, and China’s subsequent rebuttal created a furor in parts of the U.S. intelligence community, which appeared unprepared for the news that China was so far into its efforts to develop hypersonic capabilities. Others were less surprised, however.

“Thus, reports that China has combined a HGV strike system with a Fractional Orbital Bombardment System (FOBS) must be taken very seriously.”

HGVs are highly maneuverable vehicles that skip or “glide” their way to a target after being brought to low orbit by a rocket booster. FOBS is a system first theorized in the Soviet Union, in which a missile enters low orbit before striking its target, rather than arcing out of orbit before coming back to the surface.

The combination of the two technologies is important because, unlike a traditional intercontinental ballistic missile (ICBM) that exits the atmosphere and reenters using a predictable arc, the HSV/FOBS design allows for a payload to strike out with near-unlimited range from any direction once it is in orbit, effectively negating traditional early warning systems.

According to Fisher, this raises a red flag, as the United States currently lacks the capability to defend against an attack that uses such technology.

“On ICBMs, HGV weapons are capable of very sharp and rapid maneuvering that can help defeat missile defenses, assuming we have anti-HGV missile interceptors, which currently is not the case,” Fisher said.

“When HGVs arm new Chinese FOBS systems, which was just tested, you combine a strike system designed to avoid U.S. ground-based detection with a strike warhead that is very difficult to shoot down.”

“There are indications that China intends to arm its ICBMs with multiple HGV warheads, which increases their range and also their ability to defeat any U.S. defenses.”

Russia finished development of its own HGV, dubbed “Avangard,” back in 2019. That weapon is capable of flying at Mach 20, roughly 15,000 miles per hour. North Korea similarly test-fired its own hypersonic weapon in September. The United States has also been investing heavily in developing hypersonic capabilities over the past several years.

Given such a threat-rich environment, it’s difficult to determine how genuine the surprise of the intelligence community was, as Fisher said that those in the know might not be making it known.

“It is hard to determine ‘surprise’ in the intelligence community because compartmentalization is its way of life,” Fisher said. “Those who might talk to journalists are not necessarily those who would have been briefed on these PLA developments.”

Regardless, the alleged capability is something to be contended with, as the combination of HGV and FOBS would mean that China has, or is close to having, a weapon capable of evading U.S. defenses and striking the homeland.

Adding to the confusion surrounding the report was Beijing’s firm denial that such a weapon existed at all.

Zhao Lijian, spokesperson for China’s Ministry of Foreign Affairs, told a media briefing that the Financial Times report was inaccurate, and said the object was a spaceship designed to explore the possibility of utilizing reusable technology to reduce the costs of China’s space missions.

The Chinese regime intentionally makes it difficult for the international community to assess its weapons tests, however, and such could be the case here. That’s because the Chinese Communist Party and its military branch, the People’s Liberation Army, utilize a so-called dual-use policy that ensures commercial and scientific projects also provide a military benefit.

The contention of whether China tested a hypersonic missile or a spaceship provides a prime example of this policy in action, as China’s space and missile programs both use rockets from the “Long March” family to reach orbit. Thus, any test to improve China’s space program also improves its missile program, and vice versa.

Fisher noted that some experts have argued that all of China’s space launch vehicles should be counted as strategic strike systems, as China’s space program and all of its launch sites are owned and managed by the Chinese military.

He also noted that public counts of China’s ICBMs don’t currently count them as such.

“It is reasonable to ask: Has the PLA really had many hundred ‘ICBMs’ for a long time?” Fisher said.

Fisher said China’s alleged test of a nuclear-capable hypersonic missile was an attempt to leapfrog U.S. capabilities and effectively subvert the efficacy of the United States’ next generation of missile defense technologies.

“Combining HGVs and FOBS is one way that China is preemptively responding to any U.S. decision to increase missile defense of the U.S. homeland,” Fisher said.

“They are seeking to defeat U.S. missiles defenses that have not yet been developed or deployed.”

This is ostensibly the reason for Washington’s concern. As stated by Wood, there’s simply no extant counter to a nuclear-capable hypersonic missile system that could strike anywhere on earth.

To mitigate such a threat, Fisher said the United States ought to pursue space-based defense systems that could detect and destroy HGVs during the “boost phase,” before they reached orbit and became unpredictable to traditional tracking systems.

Before that happens, however, Fisher said the United States would need to reckon with the failure of its long-standing policy of not building adequate missile defenses as a means of encouraging non-proliferation.

“For decades, and this is still U.S. policy, we did not build missile defenses to stop Chinese and Russian nuclear warheads from vaporizing Americans,” Fisher said. “[We did this] so that we would not give them an excuse to start a nuclear arms race.”

“American restraint on this count has failed.”